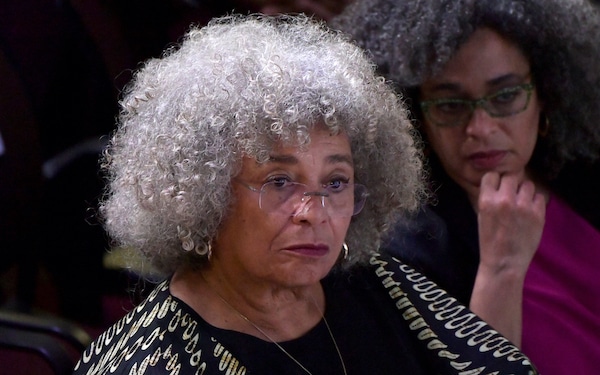 Angela Davis and Boots Riley were amongst the higher-profile protestors spotted at a Juneteenth demonstration in Oakland yesterday.

Each addressed protestors at the rally, which aligned with a work stoppage order from the International Longshore and Warehouse Union, shutting down ports from Vancouver to San Diego in solidarity with protestors and Juneteenth commemorations across the globe.

In his speech, Riley expressed his gratitude to protestors keeping up the momentum and numbers in the wake of George Floyd’s killing in late-May. “We had, these past two weeks, millions of people in the street all over the country in every single city in the United States,” Riley tells the crowd. Pivoting to the movement’s follow-through, The Coup rapper asks and answers, “What’s the next step?’ A lot of that question is a question of power.” He adds,

For her part, Davis spoke directly to the ILWU and its members, thanking them for decades of standing with social justice causes and dedicating their action to the victims of police brutality and systemic racism. “Thank you for shutting down the ports today, on Juneteenth, the day when we renew our commitment to the struggle for freedom,” Davis told dock workers.

Watch both Boots Riley and Angela Davis’ speeches from Oakland’s Juneteenth rally below.