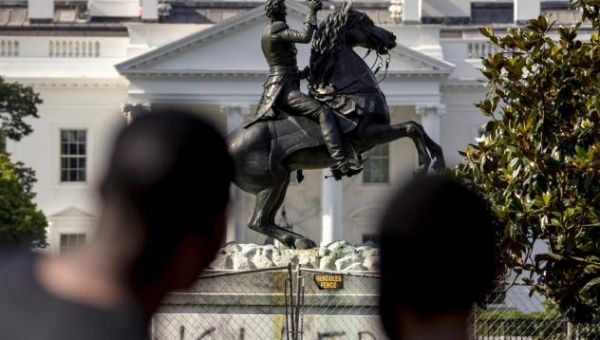 This comes as a wave of protests against racism and the toppling of statues has engulfed the U.S. and Europe, which were sparked by George Floyd’s killing on May 25. | Photo: AFP

The United States has charged four men with destruction of federal property in connection with the attempt on Monday to topple a statue of former President Andrew Jackson in Lafayette Park near the White House, the U.S. Attorney for Washington, DC and other law enforcement officials announced Saturday.

The charged men are Lee Michael Cantrell, 47, of Virginia, Connor Matthew Judd, 20, of Washington, DC, Ryan Lane, 37, of Maryland, and Graham Lloyd, 37, of Maine, who can be seen attempting to take down the statue in many videos circulating on social media.

“The United States Attorney’s Office for the District of Columbia will not stand idly by and allow our national monuments to be vandalized and destroyed,” acting U.S. Attorney Michael Sherwin said in a statement.

This comes as a wave of protests against racism and the toppling of statues has engulfed the U.S. and Europe, which were sparked by George Floyd’s killing on May 25.

Among those contentious figures is Jackson who was the seventh president of the U.S. and a slave owner. In 1830, he signed into law the Indian Removal Act, leading to the deadly expulsion of Native Americans from territory east of the Mississippi River.

The forced relocation of some 60,000 Native Americans, a process in which about 4,000 people died, has become known as the “trail of tears.”