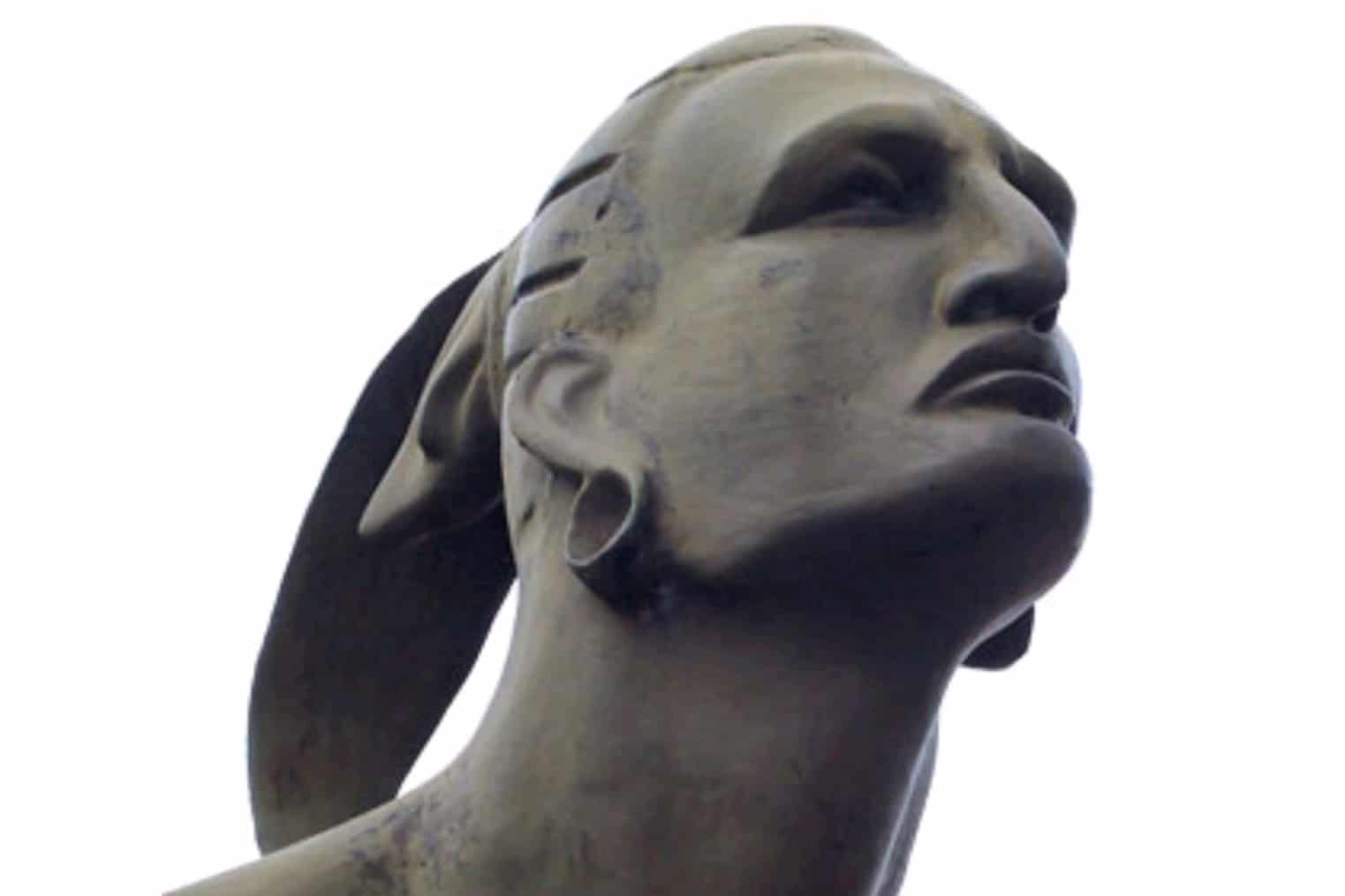 Bust from the statue of Taino Chief Hatuey (~ / 1512) in Baracoa, Cuba. Hatuey was burned alive by Spanairds for leading a defense of his homeland against Spanish invaders.

If you look at a US$20 bill, you might notice Andrew Jackson nervously watching statues of Columbus and Robert E. Lee coming down and wondering if his face is going to disappear from currency.  As Democrats ponder which militarist they wish to glorify in the next round of monuments, it is critical to realize that statues which go up are at least as important as the ones that come down.  Perhaps the best nominee for a new statue is Hatuey.

A few years ago, while visiting my daughter and grandson in Havana, I learned that his favorite playmate was Hatuey. “I recognize a lot of Spanish names,” I told my daughter.

But I’ve never heard that one.

“It’s not Hispanic,” she let me know.

It’s the name of the great Taino warrior killed by the Spaniards.

Long, long ago, before slavery existed in the colonies that would become the US; even before the first Dutch and British slave ships ventured to Africa, Spanish invaders discovered the Taino people in Hispaniola (now Haiti and the Dominican Republic) and Cuba. In 1512, the Taino invited the Spaniards to a great feast in their honor.

After the Spaniards ate the food and drank the beverages prepared for them by 2500 Taino, they drew their swords and hacked their hosts—men, women and children—to pieces. Those who were not slaughtered were dragged by the Spaniards to forced labor. They ordered them to carry loads they could not possibly lift and joked among themselves as they killed more.

As the Taino lay dying, priests knelt down to share the good news of Jesus Christ with them. If they would let Christ into their hearts, they would enjoy eternal salvation.

About 400 Taino managed to escape from the massacre and took canoes from Hispaniola to eastern Cuba. Unfortunately, most of the Tainos in Cuba would not believe that people existed who were as cruel as those in the story they heard (somewhat like those in the 21st century who do not believe the outcomes of climate change for humanity).

Hatuey led the first guerrilla warfare against European invasion of the western hemisphere. His band conducted several hit-and-run attacks against the invaders and were not defeated in battle. But a traitor informed the Spaniards of the mountain where they hid and they were surrounded and captured.

Hatuey was brought before the Spanish general who told him,

Are there Spaniards in heaven?

Heaven is full of Spaniards.

I would rather burn in hell forever than spend one day in paradise with Spaniards. 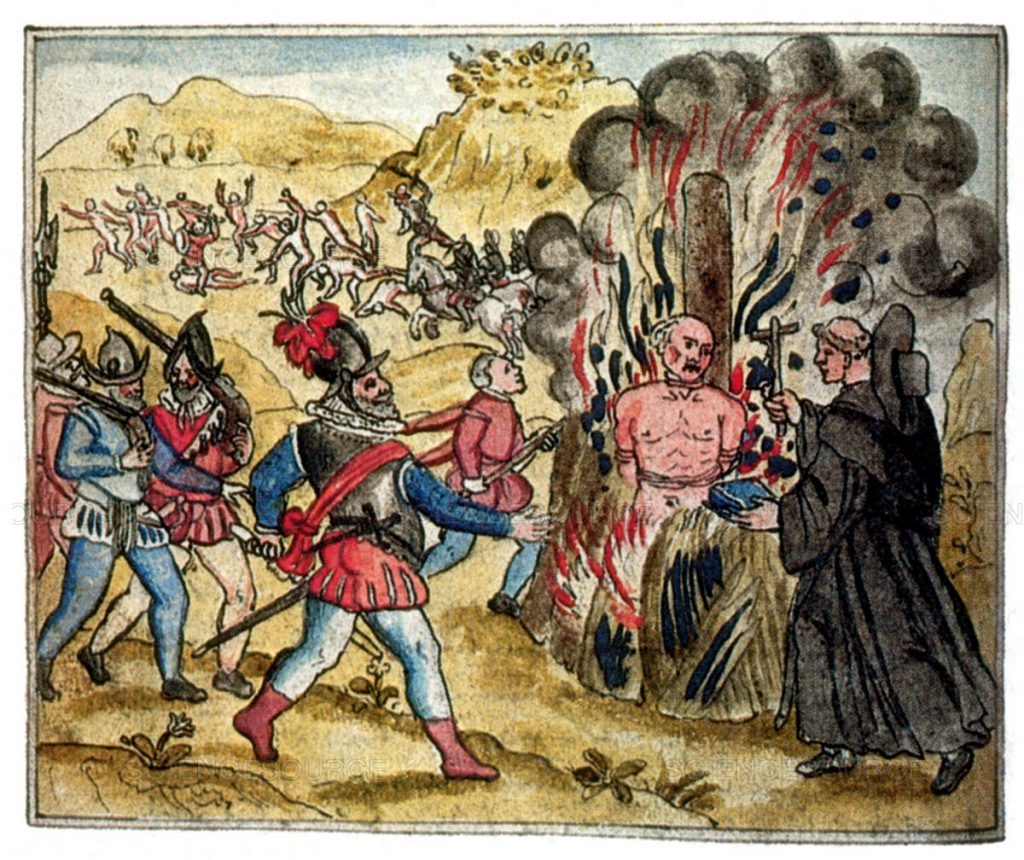 An illustration of Taino Chief Hatuey being burned at the stake in 1512. Image credit: Science Source.

One time I was telling the story of Hatuey, a listener replied, “I heard that, but I thought that Hatuey was from a tribe in Mexico. Another time, a person told me he thought Hatuey was an Inca resisting Pizarro’s invasion of Peru.

Wanting to make sure that I had it right, I checked on Google, which Wall Street would have us believe has replaced the bible as the ultimate source of wisdom and truth. Sure enough, Google confirmed Hatuey’s existence in Cuba.

But then a thought entered my mind. What if Hatuey, in some way, did exist in Mexico, Peru, and in tribes throughout North America, South America, Central America and the Caribbean? Could it be possible that the flames which consumed Hatuey’s body now burn in the hearts and minds of those who resist oppression everywhere?

A monument to Hatuey is in Baracoa, Cuba. The plate at the base reads “To the memory of Chief Hatuey, unforgettable native, precursor of the Cuban liberty, who offered his life, and glorified his rebellion in the martyrdom of the flames on 2/2/1512. Monuments Delegation of Yara, 1999”.

Don Fitz (fitzdon@aol.com) is on the Editorial Board of Green Social Thought where a version of this article first appeared. He was the 2016 candidate of the Missouri Green Party for Governor.  His book, Cuban Health Care: The Ongoing Revolution, will be available in June 2020.