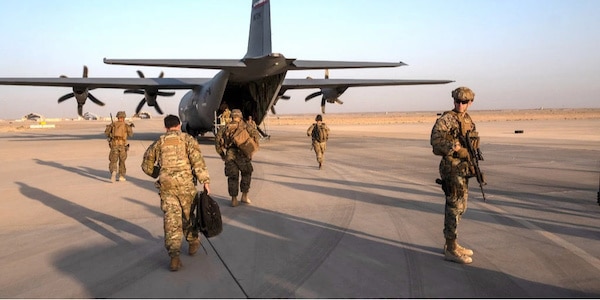 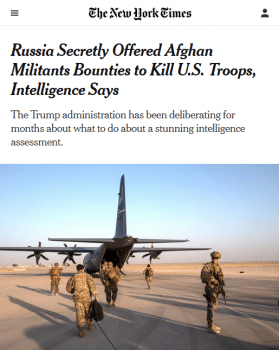 The New York Times (6/26/20) front-paged what “intelligence says”—while offering very little explanation of why they say they believe it, or why we should believe them.

Based upon a bombshell New York Times report (6/26/20), virtually the entire media landscape has been engulfed in the allegations that Russia is paying Taliban fighters bounties to kill U.S. soldiers.

The Washington Post (6/27/20) and the Wall Street Journal (6/27/20) soon published similar stories, based on the same intelligence officials who refused to give their names, and did not appear to share any data or documents with the news organizations. “The Wall Street Journal and the Washington Post have confirmed our reporting,” tweeted the Times article’s lead author, Charlie Savage. The Post’s John Hudson seemed to back him up: “We have confirmed the New York Times scoop: A Russian military spy unit offered bounties to Taliban-linked militants to attack coalition forces in Afghanistan,” he responded.

Yet these statements were categorically untrue. The Times stressed how unsure they were about the allegations, using qualifying language throughout, such as “it was not clear” and “greater uncertainty.” And Hudson’s own article uses the phrase “if confirmed” in relation to the bounty claims, explicitly conceding they are not confirmed.

Despite the fact that the anonymous accusations were far from proven, and that both the Post and Journal included categorical denials from all those involved, including the White House, the Taliban and Moscow, much of corporate media treated the story as an established fact from the outset. “This is jaw-dropping,” fumed MSNBC host Rachel Maddow (6/26/20) about the “sickening” news. She throws in an “if this Times report is correct” before going on to treat is as “confirmed” information:

You know from this reporting in the New York Times, which has since been confirmed by the Wall Street Journal, that not only does the president know that Russia was paying for American soldiers’ deaths, paying rewards for Americans dead…his response to that is nothing except a friendly call.

This would be troublesome enough, but there are a number of reasons to be skeptical of the veracity of the claims. Firstly, the Times, Post and Journal’s reports are all based on fundamentally untrustworthy actors who refuse to go on the record. Here is a list of all the sources mentioned in the Times report:

It is standard journalistic practice to name and check sources. The Society of Professional Journalists’ code of ethics insists that “reporters should use every possible avenue to confirm and attribute information before relying on unnamed sources,” and that we must “always question sources’ motives before promising anonymity,” because too many “provide information only when it benefits them.”

Without a name to go with the source, there are no consequences for sources (or journalists, for that matter) lying and spreading malicious rumors. Using an anonymous source is implicitly asking readers to trust a reporter’s judgment and credibility. The practice is less important with minor details in a story (e.g. “a city nurse said three people had been injured”), but grows exponentially more vital when the source is the basis for the article, and when there are massive consequences in publishing the story. That is why it should be reserved for whistleblowers or others facing serious harm if caught. The Times’ own guidelines on integrity strongly discourages the practice; “There is nothing more toxic to responsible journalism than an anonymous source,” wrote the paper’s public editor (New York Times, 5/30/04).

Allowing unnamed officials to set the agenda in news is something FAIR has constantly criticized (6/25/14, 3/29/16, 4/26/17), and regularly leads to outlets being burned (FAIR.org, 6/30/17, 12/3/18). Therefore, they should be used only when a reporter is completely confident in their veracity. Considering who the sources were for the Russian bounty scandal (intelligence officials), the story, as it was published, should never have left the drawing board. As we wrote recently (FAIR.org, 2/28/20):

It is the job of the covert security services to lie and manipulate. They are among the least trustworthy groups in the world, journalistically speaking, as part of their profession involves planting fake information. The only group less deserving of blind faith than spies would be anonymous spies. 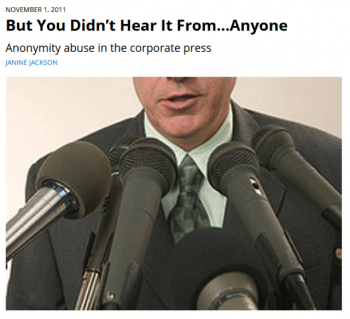 Janine Jackson (Extra!, 11/11) noted that journalists’ anonymity agreement with official sources “works out swell for powerful people who’d prefer to avoid accountability for what they say, and terribly for citizens for whom that accountability is crucial.”

Unfortunately, reliance on such sources is near ubiquitous at the Times and the Post. In 2011, FAIR (1/11/11) found that virtually every article on Afghanistan appearing in the two outlets over the course of a week featured material from anonymous official U.S. sources.

The information on the Russian bounties appears to have been both minimal and vague, with officials refusing to show any corroborating evidence or the documents they claimed to have, and were unable to link the accusations to any concrete, real-world events. Perhaps more solid information will be provided at a later date, but the fact that what has been presented so far has turned into a major story is bizarre in itself.

The first response of any credible journalist to receiving this tip, given to them by spooks who refused to put their names to it—and who freely admitted, as the Times report notes, that the information was derived from “interrogated” Afghan fighters, in a country were Human Rights Watch (4/17/19) says torture of detainees is “disturbingly high”—should have been to throw the story into the trash bin, at least until the officials agreed to go on the record. That the authors of the Times article share five Pulitzer Prizes between them suggests that this might not have simply been comically irresponsible and shoddy journalism, however, but something more intentional.

As the three articles pointed out, the accusations come at a time when the Trump administration is negotiating with the Taliban and has committed to removing all troops from the country by next year (a move that is now being blocked by the House Armed Services Committee because of the bounty scandal). Crucial nuclear weapons limitations treaties are also expiring, with Moscow showing a keen interest in renewing them. But many officials argue the U.S. should start a new atomic arms race, “spending” Russia into “oblivion.” 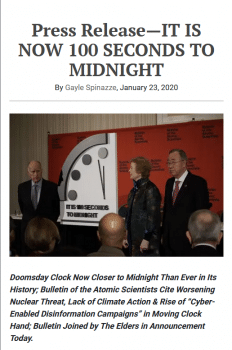 It’s bad news when the publication that tracks how close we are to the end of the world (Bulletin of the Atomic Scientists, 1/23/20) switches its gauge from minutes to seconds.

Partially in response to the increased tensions between the two nations, the Bulletin of the Atomic Scientistsrecently moved its famous Doomsday Clock up to 100 seconds to midnight, signalling that they believe the world is closer than it has ever been to Armageddon, even than during the Cuban Missile Crisis. This background should have been a red flag from the outset. It is rare that poor journalism threatens the fate of the planet, but increasing hostility between two nuclear-armed foes might be doing just that.

If the Taliban is indeed being paid to kill American servicemen and women, they are not doing a particularly good job of it. U.S. losses in Afghanistan have slowed greatly, from dozens dying every month during President Obama’s surge to only 22 in the past year. Over 1,700 died under Obama, compared to just a few dozen under Trump.

To anyone concerned about protecting the lives of U.S. troops, the logical answer would be to remove them from Afghanistan, as both Obama and Trump have promised. Yet very few of the countless reports questioned either the wisdom or the legitimacy of the 19-year U.S. occupation of the country.

If the story is true, Russia would be mirroring semi-official U.S. policy with regard to their own troops. In 2016, former acting CIA Director Michael Morell appeared on the Charlie Rose Show (8/8/16), and said it was his job to “make the Russians pay a price” for their role in the Middle East. When Rose asked if that meant killing Russians, he replied: “Yes. Covertly. You don’t tell the world about it. You don’t stand up at the Pentagon and say, ‘We did this.’ But you make sure they know it in Moscow.” Going further back, the U.S. channeled vast amounts of money to the Afghan Mujahideen in the 1980s “to make sure Afghans could do everything possible to kill Russians, as painfully as possible,” in the words of influential Rep. Charlie Wilson.

Following up on the story, the New York Times published two further viral articles, claiming that Trump had been made aware of the Kremlin plot as early as February (6/29/20) and that Russia had sent large financial transfers to a Taliban-linked account (6/30/20). Yet both these stories suffered from the same deficiencies as the first one, depending on anonymous official sources making relatively unspecific claims while offering no evidence. Indeed, the unnamed “analysts” were only willing to say that the cash transfers were “most likely” part of the bounty scandal the Times had broken four days earlier. Yet the effect was to bolster the veracity of what had come before in many people’s minds. 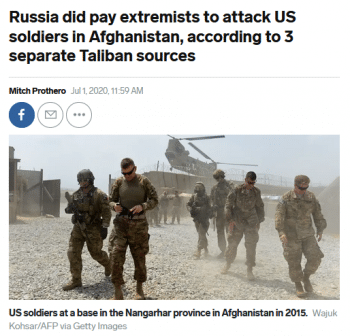 One source for Business Insider (7/1/20) says ” it was well-known that groups in need of money could work with Russians,” another says “there were many affiliated groups that have maintained ties with Russia,” and the third is someone whose name Business Insider doesn’t know that it communicated with only through Facebook.

Meanwhile, Business Insider (7/1/20) ran a story “confirming” the unfolding bounty scandal, claiming that they had spoken to three Taliban sources who told them Russia and Iran offered them payments. As with the Times, however, the sources were unwilling to put their names to the accusations. Perhaps more comically, Business Insider admitted that it did not even know the name of one of the “Taliban commanders” it cited, communicating to him only via Facebook. If this is how credulous Business Insider is, I know a Nigerian prince who is eager to talk to them about an urgent business proposal.

Independent journalist Caitlin Johnstone (Medium, 6/28/20) suggested that corporate media could not be this obtuse, and that the affair suggested active collaboration between deep state and fourth estate, writing:

All parties involved in spreading this malignant psyop are absolutely vile, but a special disdain should be reserved for the media class who have been entrusted by the public with the essential task of creating an informed populace and holding power to account.

Media like the New York Times and Washington Post pour scorn on Trump administration officials daily, yet appear to display complete reverence to the national security state, treating three-letter agencies’ every utterance as gospel. In the wake of a number of high-profile police lies during the George Floyd protests, the Washington Post (6/30/20) reported that newsrooms across the country are reflecting on their relationship with law enforcement and will no longer accept “police said” as fact. Perhaps they should do the same with intelligence officials.