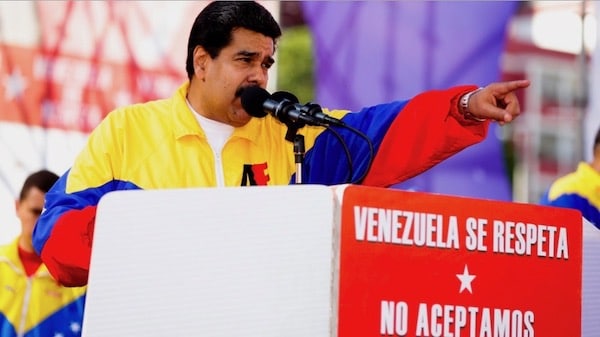 British Judge Nigel Teare ruled on Thursday July 2 against the constitutional government of Venezuela led by President Nicolás Maduro and denied access to Venezuela’s Central Bank to their gold reserves held in the Bank of England. The reasoning of the court was that the British government ‘unequivocally’ recognizes far-right opposition deputy Juan Guaidó as ‘interim president’ of the country and not democratically-elected Maduro.

The decision was denounced by Venezuela’s Foreign Ministry as “unbelievable and absurd” and an attempt to “dispossess Venezuela of its gold,” while taking away the country’s right to use the resources that belong to it and its people. In the communique released on Thursday they also highlighted that the decision is grounded on the “hallucinating self-proclamation of a Venezuelan deputy as interim president of Venezuela,” who is seeking to take control of the resources of the Bolivarian Republic of Venezuela “in complicity with the government of the United States.”

On May 14, the Venezuelan government had presented a request to the Bank of England to demand that the bank transfer 1 billion dollars in gold reserves that Venezuela’s Central Bank stored there. Access to their gold reserves had previously been denied by the Bank of England, but Venezuela filed the request in May in order to help in their fight against the coronavirus pandemic. The government argued that due to the brutal blockade of the country imposed by the U.S. government, their capacity to respond properly to contain the spread of the virus has been inhibited. Venezuela even reached a deal with the United Nations Development Program (UNDP) for the direct transfer of their gold assets to the UNDP to purchase food and medicine for Venezuela. Even so, Venezuela’s request for the release of any of its gold assets was rejected by Britain’s high court today Thursday July 2.

Venezuela has already suffered a lack of access to funds due to asset seizure or freezing by international banks due to the regime of sanctions imposed on Venezuela by the U.S. government and adhered to by dozens of countries under threat of penalty. In August 2017, the Trump administration issued an order which prohibits Venezuela from borrowing in U.S. financial markets. The order has had serious secondary impacts such as inability to restructure foreign debt, and Venezuela’s oil production which makes up for the largest part of their GDP has fallen to levels unseen for years. In the year following this order, the decline in production translated to a loss of 6 billion dollars of oil revenue.

Following the self-proclamation of Juan Guaidó as ‘interim president’ in January 2019 and the recognition of Guaidó by the U.S. and its allies, the regime of sanctions tightened. On January 29, the U.S. announced that it would block 7 billion dollars in assets of the Venezuelan state oil company, Petroleos De Venezuela SA (PDVSA), and 11 billion dollars of their export revenue. They also announced that they would freeze the assets of PDVSA’s U.S.-based subsidiary Citgo.

In April 2019, the sanctions announced targeted the Central Bank of Venezuela by cutting off its access to U.S. currency and further limiting its ability to conduct international financial transactions. Following this round, several international banks announced that they would freeze or retain the assets of the Venezuelan government held abroad in accounts, a move supported, and often encouraged, by Guaidó. Banks such as Citibank, Clearstream, North Capital, Novo Banco, Sumitomo and of course the Bank of England currently have retained over 4.5 billion dollars in assets of the Venezuelan government.

The impact of the sanctions and consequential retention of assets has first and foremost been on Venezuela’s people. The decrease of national revenue and the lack of access to funds has affected the Venezuelan government’s ability to run social programs, buy crucial food and medicine (not only because of lack of funds but due to blocks on transactions), and maintain public infrastructure and projects.

Amid the coronavirus pandemic, this has become an even more pressing concern. Back in March, Venezuela had requested an emergency loan from the International Monetary Fund (IMF) to help fight the virus but they were rejected under pressure from the U.S. The justification was that the IMF does not recognize Nicolás Maduro as president.

In the statement released by the Foreign Ministry they deem the UK’s decision as “an act of piracy that is an assault on the right to health and life of the Venezuelan people, by taking away the necessary gold to combat one of the worst pandemics that has hit humanity, working for the extermination of the Venezuelan population.”

The rejection of aid by the IMF in March and the ruling by the Bank of England today were decisions celebrated by far-right leader Juan Guaidó, which raises serious questions about his interests. If he does care about the people of Venezuela as he claims to, should he not push for the mobilization of all possible resources to protect and support the people and strengthen public health infrastructure, instead of depriving the people and the government of key funds?

The Bolivarian government has vowed that they will appeal the decision issued by Britain’s high court and the government will denounce the attack on the integrity of the Venezuelan people in all international spaces.