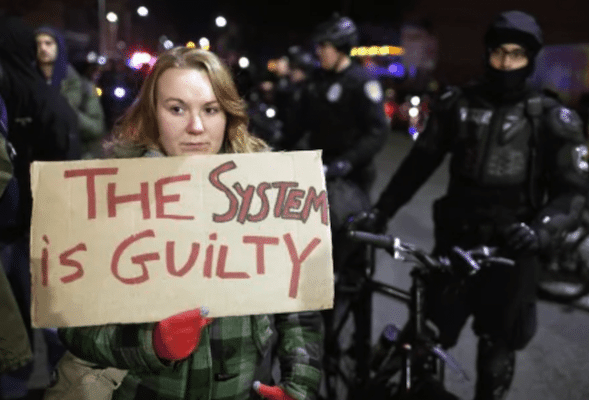 USA: ‘Qualified Immunity’ Is How the Police State Stays in Power

Because the system is rigged and the U.S. Supreme Court—the so-called “people’s court”—has exchanged its appointed role as a gatekeeper of justice for its new role as maintainer of the status quo, there will be little if no consequences for the cops who brutalize and no justice for the victims of police brutality.

This is how unarmed Americans keep dying at the hands of militarized police.

By refusing to accept any of the eight or so qualified immunity cases before it this term that strove to hold police accountable for official misconduct, the Supreme Court delivered a chilling reminder that in the American police state, ‘we the people’ are at the mercy of law enforcement officers who have almost absolute discretion to decide who is a threat, what constitutes resistance, and how harshly they can deal with the citizens they were appointed to ‘serve and protect.”

This is how qualified immunity keeps the police state in power.

How else do you explain a doctrine that requires victims of police violence to prove that their abusers knew their behavior was illegal because it had been deemed so in a nearly identical case at some prior time: it’s a setup for failure.

Do you know how many different ways a cop can kill, maim, torture and abuse someone without being held liable?

The cops know: in large part due to training classes that drill them on the art of sidestepping the Fourth Amendment, which protects us from being bullied, badgered, beaten, broken and spied on by government agents.

This is how “we the people” keep losing.

The courts have given the police and other government agents a green light to shoot first and ask questions later, as well as to probe, poke, pinch, taser, search, seize, strip and generally manhandle anyone they see fit in almost any circumstance

Whether it’s police officers breaking through people’s front doors and shooting them dead in their homes or strip searching motorists on the side of the road, these instances of abuse are continually validated by a judicial system that kowtows to virtually every police demand, no matter how unjust, no matter how in opposition to the Constitution.

Make no mistake about it: this is what constitutes “law and order” in the American police state.

A review of critical court rulings over the past several decades, including rulings affirming qualified immunity protections for government agents by the U.S. Supreme Court, reveals a startling and steady trend towards pro-police state rulings by an institution concerned more with establishing order, protecting the ruling class, and insulating government agents from charges of wrongdoing than with upholding the rights enshrined in the Constitution.

the Supreme Court has built qualified immunity into an often insurmountable police defense by intervening in cases mostly to favor the police.

The system is rigged.

Police can claim qualified immunity for warrantless arrests based on mere suspicion.

Police can claim qualified immunity for shooting a fleeing suspect in the back.

Police officers can use lethal force in car chases without fear of lawsuits.

Police can stop, arrest and search citizens without reasonable suspicion or probable cause.

Police officers can stop cars based on “anonymous” tips or for “suspicious” behavior such as having a reclined car seat or driving too carefully.

Police can forcibly take your DNA, whether or not you’ve been convicted of a crime.

Police can use the “fear for my life” rationale as an excuse for shooting unarmed individuals.

Police have free reign to use drug-sniffing dogs as “search warrants on leashes.”

Not only are police largely protected by qualified immunity, but police dogs are also off the hook for wrongdoing.

Police can subject Americans to strip searches, no matter the “offense.”

Police can break into homes without a warrant, even if it’s the wrong home.

Police can use knock-and-talk tactics as a means of sidestepping the Fourth Amendment.

Police can carry out no-knock raids if they believe announcing themselves would be dangerous.

Police can recklessly open fire on anyone that might be “armed.”

Police can destroy a home during a SWAT raid, even if the owner gives their consent to enter and search it.

Police can suffocate someone, deliberately or inadvertently, in the process of subduing them.

As I make clear in my book Battlefield America: The War on the American People, we are dealing with a nationwide epidemic of court-sanctioned police violence carried out with impunity against individuals posing little or no real threat.

Police reform is necessary and unavoidable if we are to have any hope of living in an America in which freedom means something more than the right to stay alive, but how we reform the system is just as important as getting it done.

We don’t need to wait for nine members of a ruling aristocracy who primarily come from privileged backgrounds and who have a vested interest in maintaining the status quo to fix what’s broken in America.

Nor do we need to wait for 535 highly paid politicians to do something about these injustices only when it suits their political ambitions.

And we certainly don’t need to wait for a president with a taste for totalitarian tactics to throw a few crumbs our way.

This is as much a local problem as it is a national one.

Be fair. Be nonviolent. Be relentless in your pursuit of justice for all.

Constitutional attorney and author John W. Whitehead is founder and president of The Rutherford Institute. His new book Battlefield America: The War on the American People