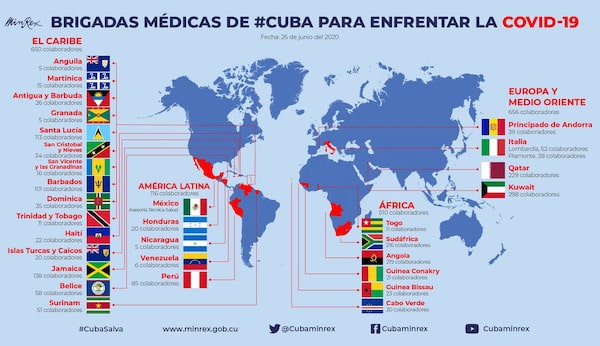 This map was released by the Cuban Ministry of Foreign Affairs on June 26. It shows the extent of the activity of Cuban medical brigades sent abroad to fight Covid-19.

The following article by Fernando Ravsberg appeared in the Salvadorian digital daily news site ContraPunto on June 24. The translation from the Spanish, which includes a few explanatory additions, is by The Bullet.

It is worth mentioning some of the significant developments that have occurred in the two weeks since Ravsberg’s article appeared.

This map was released by the Cuban Ministry of Foreign Affairs on June 26. It shows the extent of the activity of Cuban medical brigades sent abroad to fight COVID-19.

Cuba in the Last Stretch of the Pandemic

Cuba is only a few days away from ending its coronavirus quarantine. Except for Havana, all the other provinces are free of the contagion and have begun moving toward a new normality. The capital will have to wait a couple of weeks more because it still averages between one and ten new infections per day and has about a hundred people suffering from COVID-19.

The measures adopted by the Cuban government have been extremely successful. The archipelago is emerging from the crisis with a total of just 2,319 people who were infected with the virus, 2,130 of which have recovered, while 85 have died. [The remainder, approximately 100 people, are still undergoing treatment…eds.] The Cuban public health system was prepared for massive casualties, but the truth is that in the worst moments of the crisis less than 60 per cent of its hospital resources were needed.

Currently, local and interprovincial transport is moving again, except in Havana, and hotels have begun opening their doors to Cuban vacationers. International tourism is slated to begin on July 1, but only on the adjacent islands [the Cays], which have their own airports. All tourists who arrive at these resorts will be tested for COVID-19, as will the staff who work there. Tourists and hotel staff will not be allowed to leave the cays or come into contact with the neighbouring populations.

Cuba’s quarantine-based process to deal with the pandemic developed gradually. Initially, some Cubans criticized the delay in closing the country’s borders or suspending school. However, once the full lockdown went into effect, international travel ended completely. The only passenger planes that landed on the island during this period were those provided by countries that had requested emergency medical aid from Cuba. These flights carried Cuban medical teams back to those countries. More generally, the authorities established a deadline, after which no one was allowed to leave the country. Some 7,000 Cubans resident in other countries who were visiting the island at the time and about 5,000 foreigners chose to stay and ride out the pandemic in Cuba.

The government suspended all interprovincial and urban transportation. All vehicles were used exclusively to transport health workers or other essential services personnel. The police controlled the streets, enforcing the mandatory use of face masks, dispersing gatherings and maintaining the necessary distance between people lined up outside the stores. These lineups to buy food became one of the main health dangers. [Severe shortages of basic foodstuffs are common in Cuba, as are long lines once supplies do arrive in the shops…eds.]

The troops of the Armed Forces, prepared for chemical or bacteriological warfare, sprayed the streets with chlorine, using their tank trucks and motorized pumps. To prevent the spread of the virus, thousands of soldiers stopped people from leaving heavily infected areas. People coming from areas with very few positive cases were allowed only limited access to infected areas. [The local quarantines were adjusted frequently, in accordance with the severity of the outbreak in the area. They were lifted as the threat receded…eds.]

Payment of taxes, electricity, water, gas, telephone, and internet bills was postponed, as were the installments on bank loans. The state–owner of 90 per cent of the companies–covered the wages of those laid off because of the pandemic. Social workers brought food to the elderly who lived alone, so that they would not have to venture out into the street. Restaurants sold food for consumption at home.

Whenever the public health authorities identified an individual carrying the virus, they investigated who might have been the source of the infection, and who the infected person might have been in contact with after they were infected. All of the people identified in that way became suspects. Some were transferred to quarantine centers for special treatment; others were quarantined at home for 14 days, watched over by their neighbors. Doctors visited them every day. At the slightest symptom, they were transferred to the hospital and tested for the virus. Even today, some 2,000 tests are still being performed every day. This system allows many asymptomatic people, the most dangerous category, to be detected.

At the same time, a country-wide investigation was rolled out, going from house to house across the whole island. Doctors, nurses and students of medicine, nursing and stomatologists knocked on every door to inquire whether or not anyone in the family had any symptoms. [Stomatology is the branch of medicine or dentistry concerned with the structures, functions, and diseases of the mouth…eds.] This very morning a student stopped by my house to ask: “Is everyone all right, does anyone have a cough or fever?” The Minister of Health, Dr. José Ángel Portal, has explained the strategy this way:

It is to not wait for the virus to appear, but to go out and look for it.

Paradoxically, information–one of the major deficiencies in this country–has been available like never before. Every morning at nine am, the chief of Public Health Epidemiology, Dr. Francisco Durán, presents a report on national TV to share the statistics of the previous day. Cubans then find out how many people remain under observation, how many tests were performed, how many infections have been detected, how many patients are in serious or critical condition, and how many have died during the previous 24 hours.

Crises Are in the Cuban DNA

In spite of Cuba’s small size and population, and its lack of material resources, it has been one of the most successful countries in the world in dealing with the pandemic. 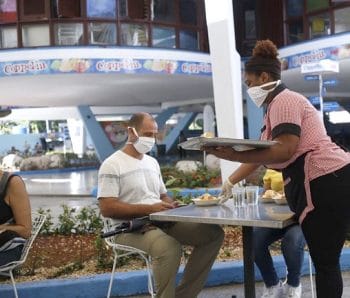 Cubans can once again enjoy their favourite flavours at the Coppelia open-air ice cream parlour in downtown Havana.

One of Cuba’s secrets is that it has spent 60 years preparing and training for a U.S. attack. Cubans are accustomed to living in a state of crisis. Three-quarters of them have lived their whole lives suffering the effects of the U.S. economic blockade. The Cuban system includes mechanisms, such as a ration book, that enable it to distribute products equitably. The Cuban Civil Defense system can mobilize hundreds of thousands of people in a few hours.

In Cuba, both the rulers and the governed operate more quickly and efficiently in critical times, when centralized decisions must be taken and all the material and human resources of the country must be mobilized to overcome the crisis. The country goes on a war footing. No one questions the orders. Citizen controls are activated, and suspects are watched carefully. During the Covid crisis, additional health measures included tracking down the contacts of those found to be carrying the virus, quarantining towns or neighborhoods when necessary, mandatory treatment in special residential centers for some of the infected population, and overall vigilance of the health situation, block by block.

Above all, Cuba can count on a health system that serves all citizens without exception, with 85,000 nurses and 95,000 doctors for 11 million inhabitants, three times more physicians per capita than Spain. In total, the Cuban system employs more than half a million health professionals, including health technicians and stomatologists (since dental care is also free). The practice of private medicine is prohibited, so all hospitals, polyclinics, family doctors’ houses in the community, and all human and material medical resources belong to the government.

Cuban doctors have a lot of experience in combating epidemics. Cuban international health brigades stationed on the island have faced all kinds of diseases in a variety of countries. Some of these medical missions, such as the ones sent to fight Ebola in Africa or the 8,000 doctors who worked in Brazil, coordinated their efforts with the World Health Organization (WHO), with which Cuba maintains close collaboration.

Weeks before the first infected persons were detected on the island, specialists from Cuba were already receiving training from the WHO on how to fight the coronavirus. In January, the first Cuban doctors arrived in China to study the situation. More than 20 Cuban health brigades, with some 2,500 members, have responded to requests for help from other countries. They are now active fighting COVID-19 in Africa, Latin America, the Caribbean, Italy, and Andorra.

Cuba’s task has been made especially difficult because even during the pandemic the Trump Administration has increased pressure on companies to prevent them from trading with the island. The U.S. has even prevented donations of health supplies and equipment from reaching Cuba. For example, Washington threatened to impose financial sanctions on the Colombian airline, Avianca, thereby forcing it to cancel its contract to transport medical equipment and face masks from China to Havana. The supplies had been donated by Chinese businessmen. Washington has also intervened to prevent companies from selling ventilators to Cuba.

The White House is working hard to dissuade countries from calling on Cuba for medical services. It is preparing new legislation that will allow it to impose sanctions on countries that do so. It understands that this is a strategic sector of the Cuban economy, since the sale of medical services represents 75 per cent of Cuba’s foreign exchange earnings. Despite the U.S. pressure, Cuba’s health brigades are present in more than 60 nations, and that number continues to grow. For example, the United Arab Emirates has just requested permanent healthcare assistance from Cuba.

Born in Uruguay, Fernando Ravsberg spent 22 years as an international correspondent for the BBC’s Latin American service. He lives in Havana with his Cuban-born wife and children. He is active on Facebook