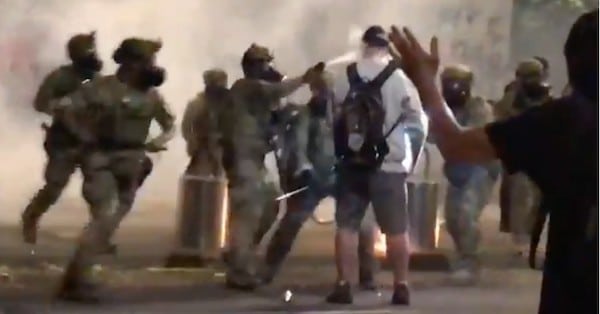 “I was enraged simply because I did not think they were taking their oath of office seriously or they were compromising their oath of office,” Christopher David, the 53-year-old disabled Navy veteran shown above being attacked and pepper sprayed by federal police. “So I actually went down because I wanted to talk to them about it.” (Screenshot: via Twitter/Zane Sparling/@PDXzane)

The U.S. Navy veteran who was brutally attacked by unidentified federal police in Portland, Oregon over the weekend is speaking out about the incident—a video of which has gone viral online—and explained that he traveled to the site of local protests to get some answers directly from the personnel in the secretive units after becoming outraged over their deployment by the Trump administration.

So I actually went down because I wanted to talk to them about it.

The assault caught on film by local journalist Zane Sparling—and as of this writing viewed more than 9.6 million times on social media—shows David withstanding several blows from one office before another pepper sprays him in the face from close range.

According to The Oregonian, it was the first such protest David had attended in his life. As the newspaper reports:

David was home watching television on Saturday, the 52nd straight night of protests in the city, getting angrier by the moment when he learned that unidentified federal officers had been sent to Portland by President Donald Trump to deal with local protestors.

He decided to take the bus downtown to talk with the officers. David, who graduated from the U.S. Naval Academy, wore his Navy sweatshirt and Navy wrestling hat, thinking they’d respect him because of he was a veteran.

“I thought the clothing would be a shield,” he said. “Turns out it had zero effect. They didn’t care.”

“I stood my ground at that point and just stayed there … I did nothing provocative. They just started whaling on me with batons, and I let them,” David told The Independent.

I probably could’ve taken a lot more baton blows if they had not sprayed pepper spray all over my eyes.

Explaining the incident to The Oregonian, David said after several hours of listening to speeches but not seeing the federal police units that had spurred him to attended, he was just about to get on a bus to leave the protest area late Saturday night when the officers suddenly appeared.

“Literally at that moment a bunch of guys came out of the courthouse and ran into the street,” David explained.

I was in the park and watched these guys body blast the protestors. I walked over and stood there in the street. I wanted to ask them about the oath they took. Everyone was screaming. No one heard me. Then one of the officers hit me hit me and kept hitting me. It didn’t seem like any of them were trained for this.

David told the newspaper that as a former wrestler who stands 6-foot-2 and weighs about 280 pounds he did not feel intimidated by the officers.

“The video makes me look even bigger than I am,” he confessed.

Those officers were small. They seemed scared. They had no tactics, just seemed like a gang.