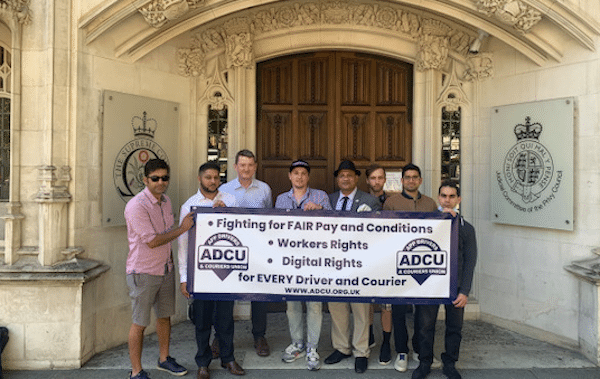 ADCU Members outside the Supreme Court on July 20, 2020

In what may come to be viewed as a historic court case, a group of UK Uber drivers from London, Birmingham, Nottingham and Glasgow have launched a legal action against Uber in the Netherlands, supported by the App Drivers and Couriers Union (ADCU), the International Alliance of App-based Transport Workers (IAATW) and Worker Info Exchange. The complaint against Uber, which is headquartered in Amsterdam, centres on its failure to provide access to data on drivers or explain its algorithmic management practices as required by the European General Data Protection Regulation (GDPR).

Meanwhile, two other members of the ADCU, Yaseen Aslam and James Farrer, will be appearing in the Supreme Court in London on July 21st to defend themselves against Uber’s challenge against earlier landmark rulings that when they were working for Uber they should have been treated as workers rather than independent contractors, and should therefore have been entitled to paid holidays and the minimum wage.

The coincidence of these two cases exposes very clearly the contradiction that lies at the heart of the platform management model–which seeks to control workers with a minuteness of detail unprecedented in the history of capitalism while at the same time denying that they have any relation of dependence at all. Like Schrödinger’s cat, which is simultaneously both alive and dead, they are simultaneously both managed and not managed, forced to live out their working lives in a stressful borderline state in which they are denied both autonomy and security.

Platform labour has to be seen as part of a larger continuum of precarious, on-call work that also includes a range of different temporary, on-call and zero-hours contractual arrangements. As recent research I carried out with colleagues at the University of Hertfordshire, funded by the European Foundation for Progressive Studies (FEPS), the trade union confederation UNI-Europa and–in the UK–the TUC, has shown, not only has it been growing exponentially over the last few years, but the algorithmic management practices associated with it have spread widely across the labour market.

Between 2016 and 2019 in the UK the number of working age adults who said they did work obtained via an online platform at least once a week doubled from an estimated 2.8 million people to an estimated 5.8 million (from 4.7 per cent to 9.6 per cent of the adult population). The proportion of people using an app or website to be informed of new tasks, more than doubled, from 10% to 21% of the working-age population, but barely half of these were platform workers. The use of apps or websites to record what work had been done rose over the same period from 14.2% to 24.6%. Again, most people reporting these practices were not platform workers. Nearly a quarter (24%) of UK adults surveyed in 2019 also reported having their work rated by customers, of whom nearly half (11.7%) were not platform workers.

Platform workers are part of a growing army of what I have elsewhere called ‘logged’ workers, logged in three senses of the word. First their work has been chopped up into separate interchangeable tasks, as a tree is cut into standardized logs, making it possible for them to be paid by the task. Second, they have to be logged on to the app, constantly alert for a new task to be notified, waiting thumbs-poised to ‘accept’ it in order to obtain work. And third, they are logged in the sense of being closely monitored and recorded, with every action captured digitally, whether this is through GPS tracking, keystroke counting, webcam capture or voice recording, with a digital registration of anything from the speed with which brakes are slammed on to the emotional content of a customer service call, subjecting workers to an unprecedented level of 360 degree surveillance.

The results of this logging can be combined with data from other sources, including customer feedback, and analysed using complex algorithms (whose exact nature is hidden on the grounds that it is commercially sensitive) guiding decisions that may have life-changing implications for those workers–but against which there is no appeal.

The outcomes of these two cases will therefore have huge ramifications for very large numbers of workers: not just Uber drivers and couriers but also groups as diverse as non-tenured university lecturers and care workers.

The ADCU is a recently certified union, too new to have yet affiliated to the TUC, and with few resources. They need all the help they can get. You can contribute to their crowdfunder for the international case at crowdjustice.com.