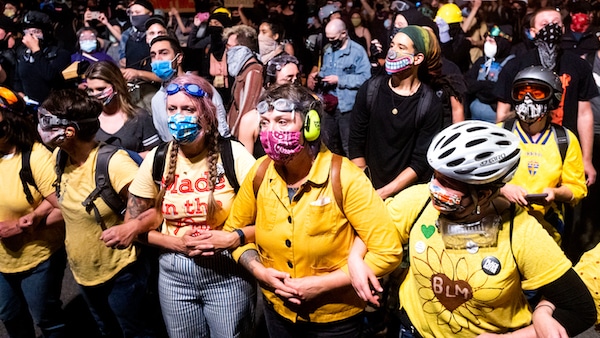 Despite a widely-condemned federal crackdown, Portland’s anti-racist police brutality protests show no signs of abating. Last night a group of local moms dressed in white and yellow tried a new tactic; placing themselves between law enforcement and protesters in order to prevent more violence. Chanting, “Feds stay clear! Moms are here!,” groups of women congregated at the Mark O. Hatfield Federal Courthouse and other locations in Central Portland. They were met with tear gas, flashbangs, and pepper round bullets, injuring many.

Jesus Christ feds came out of the courthouse in Portland and fired a flash bang at the moms against police brutality. At least one of these mothers is pregnant.

I am a 49 year old mother with a Masters in Education and I just got gassed by my own government. We were peaceful. I think I stood in the middle of the gas for longer than i should have… #wallofmoms #PortlandMoms #PortlandProtest #Teargas #BLM

Oregon’s largest city has been the site of particularly intense struggle over the past week, as the Trump administration has tried to neutralize ongoing demonstrations that began in late May. Last week, federal agents were deployed to that end. Viral video shows masked, anonymous units emerging from an unmarked minivan and seemingly abducting people off the street randomly. A disabled veteran, Christopher David, was also attacked, federal officers beating him with clubs and macing him at point-blank range. “They just started wailing on me,” David told The Independent, after images of the attack hit social media, turning him into an overnight local celebrity.

Washington’s move to bring in federal agents to Portland was roundly condemned, especially by local politicians, including the mayor, who deemed it irresponsible and escalatory, demanding that they be withdrawn. The Department of Homeland Security (DHS) has justified its actions, claiming that “violent anarchists” have taken over and destroyed the city, although the only examples of destruction it provided were stone throwing, graffiti, and a broken fence, leading to questions of whether a federal intervention was truly necessary.

Nevertheless, the DHS has declared the move a successful one, its acting Deputy Secretary Ken Cuccinelli telling NPR that he intends to take the tactic nationwide:

With as much lawbreaking [that] is going on, we’re seeking to prosecute as many people as are breaking the law as it relates to federal jurisdiction. That’s not always happening with respect to local jurisdiction and local offenses. But, you know, this is a posture we intend to continue not just in Portland but in any of the facilities that we’re responsible for around the country.

Had this happened in China🇨🇳, Congress would have already passed sanctions. pic.twitter.com/ZJ1V2SzhiM

In June, Portland temporarily suspended the use of tear gas by police and blocked police from using physical force on journalists. However, federal agents are not subject to the same laws. On Saturday, the American Civil Liberties Union (ACLU) announced it was taking the Trump administration to court over its actions. “Federal agents are terrorizing the community, threatening lives, and relentlessly attacking protesters demonstrating against police brutality. This is not law and order. This is lawlessness–and it must be stopped,” they announced, adding that they should be removed from the city. The lawsuit is aimed at stopping the feds from wantonly attacking journalists and observers.

“I’ve been documenting violent and militarized police responses to protests in Portland for more than four years, but nothing prepared me for the unrestrained brutality I’ve witnessed and experienced in recent days,” said the ACLU’s Doug Brown. “While some federal officers had already been in the streets, we now have additional militarized special ops officers occupying the streets of downtown Portland, bent on inflicting pain and terror on people who believe Black Lives Matter.”

In June, the Scottish parliament voted 52-0 to ban the sale of tear gas, rubber bullets and other weapons of oppression to the United States. Nevertheless, police in Portland continued to use near-lethal force. Last Saturday, police officers shot 26-year-old protester Donovan LaBella in the face from close range. Labella survived but needed facial reconstruction surgery, including the insertion of a titanium plate into his face.

The immediate spark for the protests was the police killing of unarmed black man George Floyd on May 25. Footage of a Minneapolis police officer choking Floyd to death for over 8 minutes went viral, causing a worldwide protest movement. Hundreds of cities in all 50 states launched their own demonstrations. Polls show that the majority of Americans disapprove of Trump’s decision to confront rather than co-opt the protests. Despite this, the order to move federal agents into Portland appears to be an intensification of the conflict rather than an attempt at de-escalation.