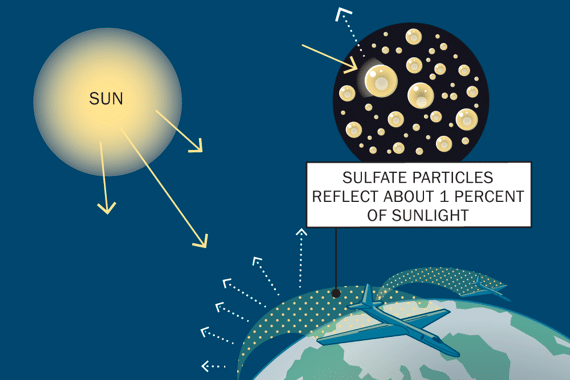 Solar geoengineering, specifically Stratospheric Aerosol Injection (SAI), is a proposed climate technology that could cool the planet—quickly and cheaply—by continually spraying megatons of sulfur dioxide into the lower stratosphere to reflect some incoming solar radiation back to space. In climate policy, solar geoengineering has long been considered fringe, at best a last-ditch “plan B” in the event of a climate emergency. But recent activity around the technology compels a shift in perspective: solar geoengineering is not a futuristic “plan B,” but a rapidly developing pillar of capital’s climate “plan A.”

Solar geoengineering is receiving renewed discussion because of brief mention in the House Select Committee’s Climate Action Plan. The plan recommends following guidance from the National Academies of Sciences’ forthcoming report on “reflecting sunlight to cool earth” (two briefings from this committee were released in June). Other recent moves include steps taken by the Harvard Solar Geoengineering Research Program (HSGRP) to advance outdoor SAI field-experiments, Congressional appropriation of $4 million to NOAA to support federal solar geoengineering research, and release of a report by the Union of Concerned Scientists endorsing cautious research.

In the midst of rising emissions and climate inaction, many scientists and policymakers are coming to the conclusion that cheap, fast-acting technologies require research and investment. Moreover, a budding consensus is emerging around key norms and best-case scenarios: solar geoengineering research should proceed cautiously, cooperatively, and transparently. Governance should be internationally coordinated and include input from publics and civil society, particularly from the Global South. If deployed, it should be gradual, moderate, and temporary, with the aim of “buying time” for emissions cuts, and providing “humanitarian” relief to those vulnerable to near-term climate risks.

This is powerful narrative. Yet, even if such extremely optimistic scenarios were to obtain—a highly dubious prospect—solar geoengineering would remain antithetical to ecosocialism and to a radical GND. There are four key reasons for this: the research is largely funded by billionaires and wealthy philanthropic organizations with ties to finance and technology capital; solar geoengineering is being designed to “buy time” for market-driven decarbonization (to explicitly avoid revolutionary change); the “humanitarian” discourse around the technology represents a form of technocratic, liberal paternalism; and, as states will have ultimate control over deployment, the prospect of militarization cannot be ruled out. 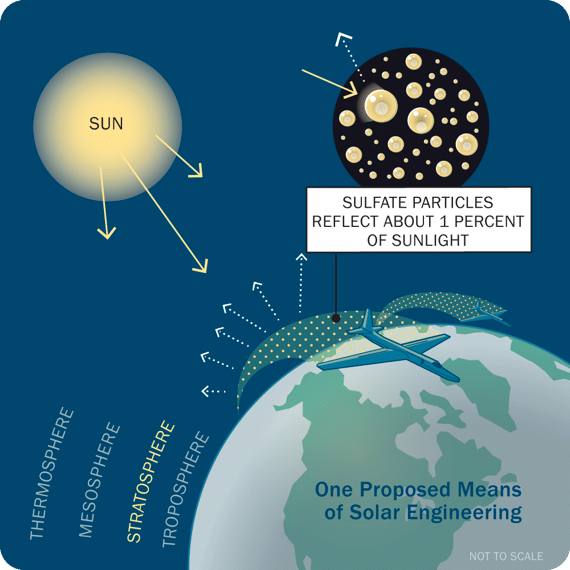 A hedge on the bet of green capitalism

Popular critiques of geoengineering fret over the possibility of a billionaire deploying the technology unilaterally. The technological and (geo)political requirements of effective deployment preclude this fantastical scenario, but focus on billionaire deployment distracts from the fact that the technology has been shaped by billionaire interests for over a decade. For example, Bill Gates is the largest single funder of solar geoengineering research via his obscure Fund for Innovative Climate and Energy Research (FICER). Gates/FICER have funded solar geoengineering research at Harvard, the University of Washington, and the Solar Radiation Management Governance Initiative.

Why are so many billionaires with ties to technology, venture, and finance capital attracted to an extreme, fringe technology on the outskirts of international climate policy? Because solar geoengineering offers a hedge on the bet of green capitalism.

A common but misguided critique of solar geoengineering links it to the fossil fuel industry. While it may ultimately provide a boon to fossil capital, the core funders and researchers are united by an ideology best labeled “green-capitalist ecomodernism.” That is, the belief that capitalism can profitably manage climate change via technological innovation, market mechanisms, and minor tweaks in policy (e.g. carbon taxes). The “dynamism” of techno-entrepreneurial capitalism will solve the climate crisis—it might just need a little more time.

Green-capitalist, ecomodernist ideology is entrenched in the thought of leading solar geoengineering researchers. Consider just two brief examples from HSGRP (the leading research program in the world). The first concerns the aligned ideologies of funders and researchers. In my interviews with HSGRP researchers, they explain that the funders are largely:

Another HSGRP researcher elaborates: the funders are “Silicon Valley types…. They’re sort of like ecomodernist tech people. So there’s a strain of that. There’s some New York hedge fund people who just find the whole idea intriguing.” These funders and researchers are united by “the idea that technology and, sort of, wise capitalism are going to have to play a central role in addressing the climate problem…that sort of perspective suffuses what we do” (emphasis added).

The second example concerns the ways in which these researchers directly position their approach to climate policy against that of Naomi Klein, a leading advocate for a radical GND. For example, Gernot Wagner (former co-director of HSGRP) and Harvard economist Martin Weitzman conclude their book with this sentiment:

Some, like activist author Naomi Klein, call for “taxing the rich and filthy”…. [But] instead of “sticking it to the man,” the point is to stick it to carbon. Far from posing a fundamental problem to capitalism, it’s capitalism with all its innovative and entrepreneurial powers that is our only hope of steering clear of the looming climate shock.

In a similar vein, David Keith, current director of HSGRP, attacks Klein in a piece with HSGRP researcher Joshua Horton. They take issue with Klein’s critique of geoengineering, and her argument for “economically radical” alternatives “like taking far larger shares of the profits from the rogue corporations most responsible for waging war on the climate…. Or reversing energy privatizations to regain control over our grids.” Horton and Keith admonish Klein’s “anti-corporate ideology,” and argue that her rejection of geoengineering is narrowly concerned with policies in industrialized countries at the “expense of possibly enormous welfare gains in developing countries.” In this ideological schema, challenging corporate power via redistribution and public control is a “narrow” concern that will not help the global poor—engineering the climate will.

Intervene in the climate system, not the capitalist system

This disingenuous (mis)reading of Klein’s agenda reveals Horton and Keith’s liberal-paternalistic conception of humanitarianism. In their argument against Klein they argue that global redistribution of wealth is theoretically possible, but “unlikely to obtain” because poverty has existed for millennia, and will persist into the future. Poverty and inequality are endemic to the human species, not the products of colonial and class power that can be altered and abolished.

Moreover, in a different article, they argue that the technological capacity to achieve 1.5°C exists, but its implementation will require “draconian social measures incompatible with market economies.”

Putting these sentiments together: leading researchers acknowledge that global redistribution for adaptation is possible, and that the capacity for radical mitigation exists, but these approaches would fundamentally challenge capitalist hegemony and are therefore untenable. To manage climate suffering and achieve global temperature targets, we must not intervene in and alter the capitalist system but intervene in and alter the climate system itself.

This ideological position is distilled by another HSGRP affiliate. Discussing the difficulty of accounting for variables of human society in climate models, they note that in these models:

there’s a flow from inputs to outputs…but in between you’ve got the entire planet, all the complexity of human society, and economics…But with geoengineering …the economy, basically, is cut out…[the] circle is not broken by the global economy … So it makes sense to look at the problem fundamentally differently, as an engineer would (emphasis added).

If solar geoengineering can manage climate risks without fundamentally altering the global economy, it can fulfill the politico-ideological fantasy of green capitalism: dealing with the climate question without challenging the basic structures of capitalist class power.

Of rogue nations and militarization

While the sources of funding and pro-capitalist ideologies behind solar geoengineering research are disconcerting, researchers are unlikely to have direct control over implementation. Governments will be the central actors involved in solar geoengineering deployment. A common refrain—particularly by U.S. based researchers—is that a “rouge” or “foreign” actor might decide to unilaterally deploy the technology, so we need research to understand the risks. This is imperial rhetoric, obscuring the fact that the only state geopolitically capable of unilateral deployment in the near-to-medium future is the United States, likely via the U.S. military.

These institutions are not interested in solar geoengineering because of the potential for “rogue” deployment, but because of the fundamental challenge that climate change poses to U.S. hegemony. U.S. power is predicated in part on the expansion of fossil fuels in the global energy system. Oil, in particular, is a key mechanism of U.S. power via its link to the dollar (creating financial dependency), powering the U.S. imperial machine, role in justifying the empire of bases and continued imperial interventions, among other ways.

Yet, the U.S. military also considers climate change a “security threat.” If solar geoengineering can bolster fossil fuel expansion (even moderately or temporarily), while reducing the climate threat, it could hold significant strategic value for U.S. geopolitical strategy. Moreover, if the military considers a changing climate a security threat, then any deliberate attempt to change the climate by another actor (i.e. geoengineering) would, ipso facto, be considered a threat. Solar geoengineering therefore enters into the U.S. military’s “command of the commons.” Given the recent advent of the Space Force, this is an arena into which the U.S. intends to expand its domination.

No kind of justice

The left’s position on geoengineering is varied. Some advocate for it (and Holly Jean Buck convincingly argues that carbon removal can be part of radical climate transitions), while the predominant position sees solar geoengineering as a “false solution.” This critique, though important, too easily lumps all geoengineering technologies under one umbrella, missing unique political and economic facets of solar geoengineering. Solar geoengineering would not merely maintain the status quo, but increase the power of concentrated capital and leading capitalist states by extending their reach to the stratosphere, only to mask and at best temporarily impede capitalism’s destruction of the planet.

Climate capitalism is likely impossible without the time afforded by solar geoengineering, and “moderate” versions could easily be incorporated into a corporate-centrist GND. But this is no kind of climate justice. With the backing of billionaires, the explicitly pro-capitalist agenda of researchers, and the ever-present prospect of militarization, solar geoengineering is antithetical to ecosocialism, climate justice, and a radical GND—movements pushing for massive redistribution, nationalization(s), new relations of production, racial, gender, and frontline justice, and beyond. A revolutionary climate movement must fundamentally reject a world engineered to fit the needs of endless capital accumulation.

Kevin Surprise (@KevinSurprise) is a Visiting Lecturer in Environmental Studies at Mount Holyoke College. His research focuses on the political economy of climate change and the (geo)politics of solar geoengineering.