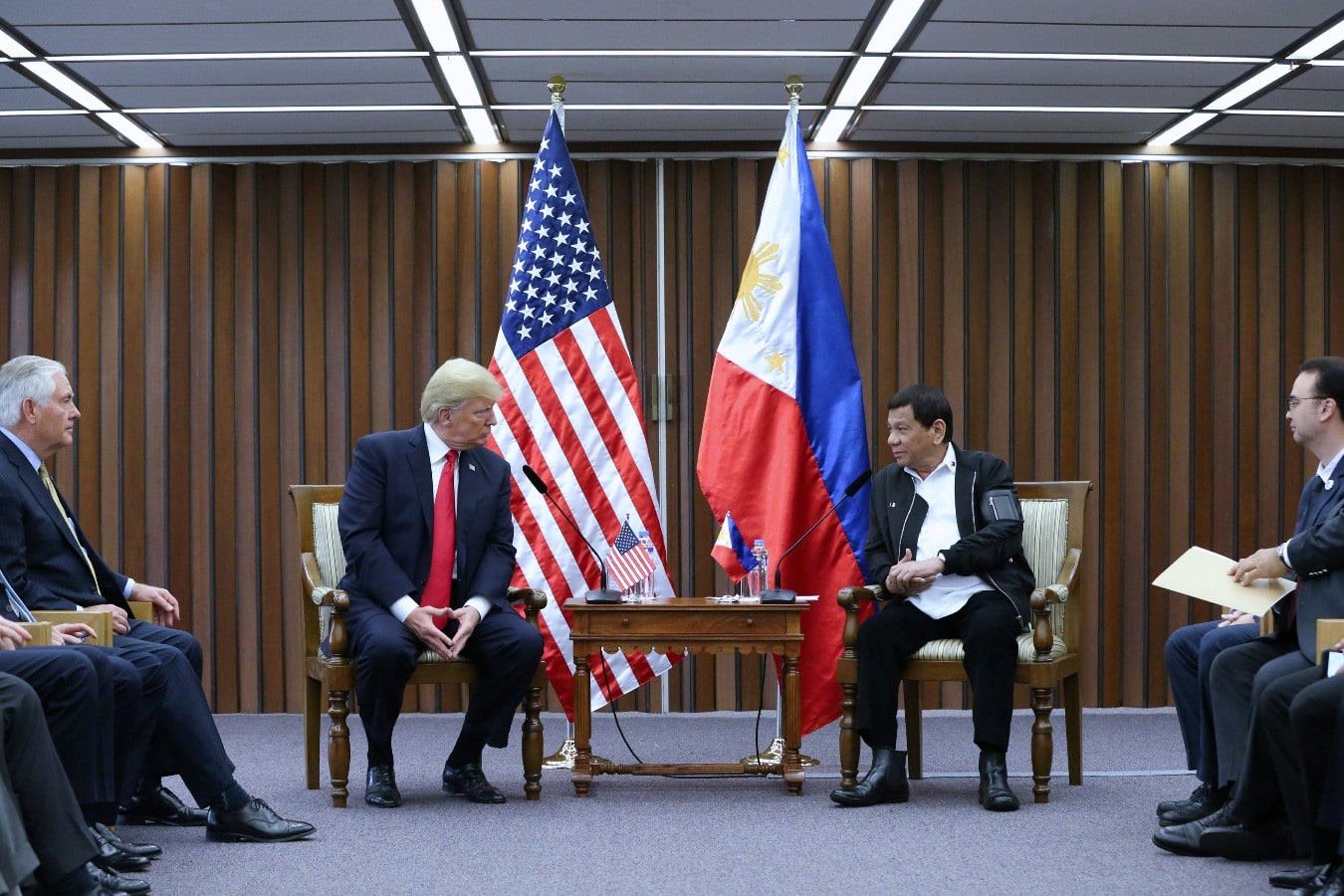 President Rodrigo Roa Duterte and US President Donald Trump discuss matters during a bilateral meeting at the Philippine International Convention Center in Pasay City on November 13, 2017.

In the midst of the COVID-19 pandemic, the Philippine Senate and House of Representatives rushed the passage of the Anti-Terrorism Act of 2020, dubbed by a broad coalition of opposition groups as the “Terror Law,” which emboldens policing powers, expands surveillance, and enables warrantless arrests. The law amended the already controversial Human Security Act of 2007 and was certified as a priority measure by President Rodrigo Duterte, who later signed it formally on July 3. The enactment of the widely condemned legislation comes in a worsening condition of impunity, where extrajudicial killings—condoned and even promoted by the President—target the urban poor, as well as Muslim and Lumad (Indigenous) people. At present, the Philippines sees its terrorist threats as primarily domestic due to the influence of the Communist Party of the Philippines, whose New People’s Army claim to have a presence in almost the entire archipelago.

The Duterte regime’s counterterrorism efforts currently focus predominantly on “local Communist armed conflict.” A national task force functions to synchronize the use of the state apparatus with the capacity of the private sector through a “whole-of-nation approach” to do so. The President himself is leading the way by taking the role of commander.

The Philippine National Police (PNP) and the Armed Forces of the Philippines (AFP) are at the forefront of state terror, having committed violence and lethal force against the populace. Iron hand is enforced without due consideration for the situation of the poorest communities by Duterte’s bloody ‘war on drugs.’ Tens of thousands are killed by police in uniform or by police guised as vigilantes; scores more are continuously imprisoned in cramped facilities. Essentially, the state handles the pandemic as a security issue rather than that of public health. This is evident with a separate national task force for COVID-19 with interrelated agencies helmed by retired generals and overall headed by Secretary of National Defense Delfin Lorenzana, who is renowned within U.S. military, diplomatic and congressional circles.

After Duterte imposed COVID-19 restrictions in March, he asked for emergency powers from Congress, which were granted unsurprisingly through the We Heal as One Act. Duterte was given a mandate to realign funds for the faster procurement of medical supplies and the distribution of cash aid to displaced workers.

The government said its pandemic response was “timely, effective, and compassionate,” although many would dispute that characterization. Critics would cite government reluctance to conduct mass testing, the failure to provide accurate information about the number of active cases, and the delayed arrival of assistance to the most vulnerable. There were constant complaints of the relief not reaching its intended beneficiaries. Volunteer-driven people’s initiatives are criminalized for ‘unauthorized’ relief efforts.

Duterte and U.S. President Donald Trump engaged in a “cordial” phone conversation in April discussing “bilateral cooperation” to fight the spread of coronavirus. Last May 1, International Workers Day, only 11.4 million people were accounted to have received cash aid, at around $100 per person, according to government reports. About 1.7 million workers were excluded from welfare programs, according to the opposition. On May 20, Duterte responded by transferring the distribution of the second tranche of assistance from the social welfare department to state security forces. To cover for the utter ineptitude and to cling to power, Duterte approached the national situation militarily again.

The right-wing Anti-Crime and Terrorism Community Involvement and Support (ACT-CIS), a newly formed party list introduced the anti-terrorism law for deliberation. Enjoying a super-majority dominance in the Congress, Duterte certified it as an urgent measure on June 1, 2020. Already, the public was reeling from the impact of the pandemic and the economic losses exacerbated by what is considered the world’s longest lockdown. The Philippine government’s budget deficit reached an all-time high from last year owing to fiscal mismanagement and the external debt servicing of the Philippines increase by 46 percent.

Now, the Washington-based International Monetary Fund (IMF) sees the Philippine economy to shrink by as much as 3.6 percent, representing potentially the worst economic contraction the country has seen since the final years of the Ferdinand Marcos dictatorship in the 1980’s. It is not surprising that in such circumstances the old paradigm would reassert itself. The thrust of Manila’s policies is most dramatically revealed in the structural adjustment programs imposed by the IMF and the World Bank on low- and intermediate-income countries, such as the Philippines. The more the borrowing, the greater the dependency for still larger loans, and borrowing became something of an economic addiction. The war on terror appears to have altered the primary objective of aid giving especially post-September 11, 2001. With this comes cognitive impairment to adopt U.S. foreign policies with its key ingredients of military equipment donation, the development of military-style police training programs or the growth of paramilitary policing units. These are in support of the U.S. National Strategy for Combating Terrorism first published in 2003.

On the other hand, the Philippine Anti-Terrorism Law is eerily similar to China’s new National Security Law. It also amends pre-existing counterterrorism legislation that is feared for its effects on Hong Kong’s democratic and civil liberties. Their passage through the proper legislative proceedings happened at an unprecedented pace and neglected widespread public opposition. As well, mainland authorities will exercise jurisdiction in “complex” cases such as those involving a foreign country or issues that are deemed to pose a major and imminent threat to national security.

However, it is noteworthy that cooperation between the U.S. and China on counterterrorism has been and is likely to remain affected by competition driven by monopoly capitalism and by the divergences of their ideological values, thus their contrasting national security interests. Both countries are expected to try to woo the Philippines into their side while Manila remains tied with its territorial claims of the West Philippine Sea (South China Sea).

Meanwhile, the United Nations report on the Philippine human rights situation was released while protests were raging against the Anti-Terrorism Law. Nine UN special rapporteurs urged Duterte to reconsider some stipulations in the highly contentious law to ensure that it complies with the Philippine government’s international human rights obligations. Public awareness of the social dimensions of state terrorism, state exaction and state abandonment led an increasing section of the populace to intervene and to demand for regime change.

In several street protests, and global online rallies, activists warned that the rollout of the act will be utilized by the U.S.-Duterte regime to instill fear and deter people with the subtext of curbing Communism. Thus, the progressive groups and broader masses joined forces to push back against the Terror Law. International community urged to closely monitor the situation in the Philippines and invoked alliances to express solidarity as well.

Peace and security are essential conditions for the wellbeing of communities. But through what means can these be achieved without addressing the concerns of social justice and economic development? As the state ratchets up the level of repression, organized resistance increasingly rises to confront it.

The coronavirus is hastening the government’s decision to choose a strategic partner in light of the actions of Philippine President Rodrigo Duterte. Between a historic relationship with the United States or a newer one with China, the country is currently at a pivotal crossroads. More significantly, it is up to the masses of Filipino people to set the stage for world history.

Ysh Cabana is a writer and community organizer living in Toronto. He is also a member of BAYAN-Canada, alliance of progressive Filipino groups.