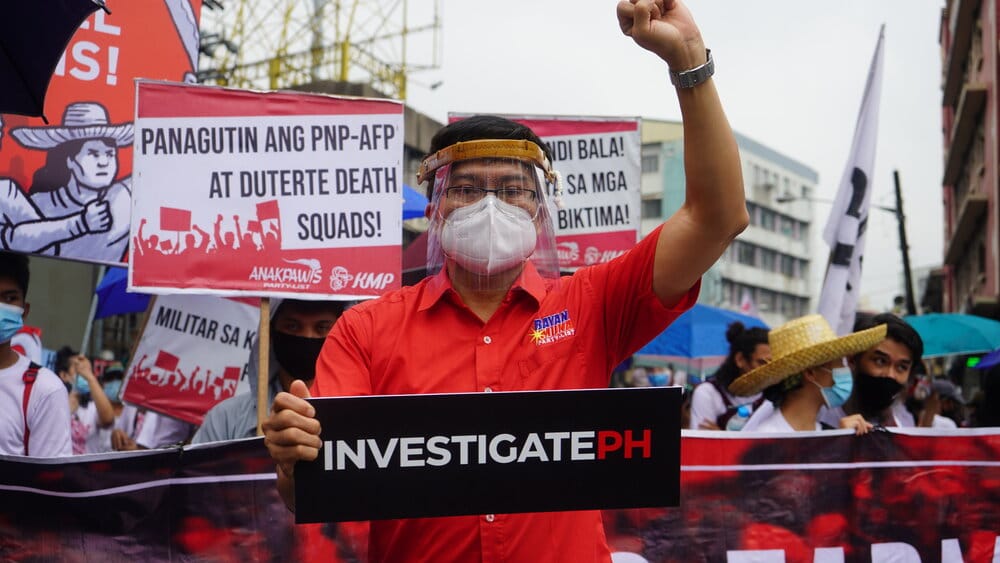 If a United Nations report wouldn’t suffice, an international commission wants to prove there is a practical way justice will be assured and perpetrators of human rights violations in the Philippines be held accountable.

The Independent International Commission of Investigation into Human Rights Violations in the Philippines or INVESTIGATE PH had a global launch Thursday, January 28, marking the start of fact-finding probes into rights abuses under President Rodrigo Duterte.

Witness the GLOBAL LAUNCH of #InvestigatePh, the International Independent Commission of Investigation into #HumanRights Violations in the #Philippines

“Investigate PH is a critical space of solidarity and accompaniment of the people of the Philippines as it investigates the blatant violation and violence related to the basic human rights of people,” said commissioner Rev. Michael Blair, who is also the general secretary of the United Church of Canada’s General Council.

The group said an “independent, people-led” probe is needed to call for more scrutiny of Duterte’s government.

The investigations aim to substantiate a June 2020 UN report on human rights violations in the Philippines, including “widespread and systematic” extrajudicial killings. Despite this, the UNHRC did not start a formal investigation in October 2020. Instead, the council approved a resolution to provide “technical assistance” that would “encourage” the Philippine government to address the issues raised in the report.

Mr. Duterte has vowed a relentless “war on drugs” — an issue he campaigned on during the elections. Many supporters have hailed his populist stance. But his administration has been accused of disregarding human rights in the conduct of police and military operations.

Death statistics released in December 2019 by the Philippine police estimated at least 5,500 people were slain in police operations between June 2016 and December 2019. However, that number was revised down without explanation from a police report in June that listed more than 6,000 deaths. Police said the suspects were killed after they resisted arrest. Meanwhile, rights groups have reported higher numbers, and said the violence has continued even as the country remains under a coronavirus lockdown.

Mr. Duterte declared that the soaring number of killings of alleged criminal suspects is proof of the “success” of his anti-drug campaign. He urged the police by his countless public pronouncements: “I will protect you. I will not allow one policeman or one military to go to jail.”

While there are several alleged rights violations, only one case — the murder of teenager Kian delos Santos —  has been solved leading to the conviction of police officers during a drug operation.

The UN report also pointed out that “red-tagging” — labelling people and groups as communists or terrorists — had been “a persistent and powerful threat to civil society and freedom of expression”.

“Legal instruments, the lockdown, taking advantage of the pandemic and the increased counter-insurgency operations, all of these things contributed to the worsening and deterioration of the human rights situation in the country,” Reyes said.

Later that year, the Philippine government announced it has created an inter-agency panel to review deadly anti-drug police operations. It also launched a human rights summit, criticized for failing to include rights defenders and victims of alleged abuses. 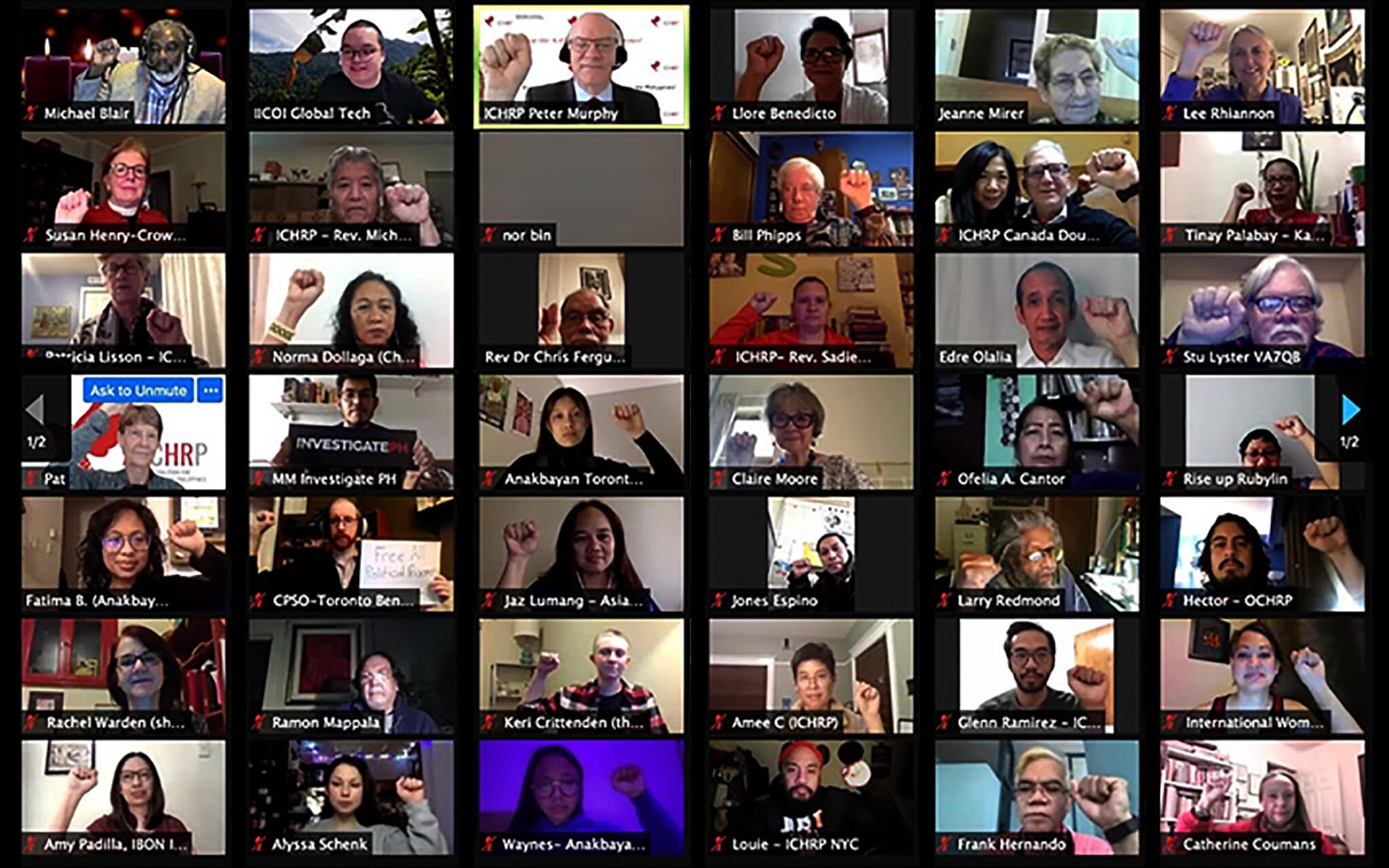 Government response can hardly be considered sincere until the realities on the ground change, according to Investigate PH.

Rev. Dr. Chris Fergusson, general secretary of World Communion of Reformed Churches, stressed that the “whole framework” of the Philippine government, whether on the “war on drugs,” red-tagging or a change in social movement, must change “for any kind of response… to be meaningful.”

“It’s their own failure to protect and defend [the] rights of their own people… This is an exercise in holding a government accountable,” he added.

The group would release three reports to be submitted to the UNHRC. The first two reports are set to be released for upcoming sessions in March and June 2021.

The group also aims to submit findings to the International Criminal Court (ICC), where allegations of crimes against humanity are filed against Mr. Duterte.

Crimes against humanity are defined by the ICC as “serious violations committed as part of a large-scale attack against any civilian population”. Since the court was established in 2002, it has received more than 12,000 complaints or communications, and nine cases have gone to trial.

Fatou Bensouda, the current chief prosecutor of ICC, said in its 2020 annual report that there is “reasonable basis” to believe that crimes against humanity were committed in the Philippines since Mr. Duterte came to power in 2016. Those crimes included murder, torture, infliction of serious physical injury and mental harm.

Mr. Duterte has frequently ridiculed Ms. Bensouda and has angrily rejected the investigation. In March 2019, he withdrew the Philippines as a signatory to the Rome Statute, the international treaty behind the ICC. But the Netherlands-based court has insisted that it retains jurisdiction on systematic crimes committed prior to the finalization of the country’s formal withdrawal.

Bensouda’s office has not decided yet whether to open the formal phase of investigation, where arrest orders and summons could be issued in the first half of 2021, citing delays brought by the COVID-19 pandemic.

Investigate PH is working with local organizations such as rights group Karapatan and the National Union of People’s Lawyers (NUPL).

International Coalition for Human Rights in the Philippine (ICHRP) chair Peter Murphy said that Investigate PH chose to tap local organizations willing to probe the country, especially as the global panel does not believe the Duterte government would investigate itself.

“We rely on speaking directly to the witnesses and families of victims of extrajudicial killings, detention on trumped up charges, red-tagging and other forms of repression,” said Murphy.

Ongoing cases such as that of “fabricated murder case” lodged against Windel Bolinget would be included in the investigations.

After being red-tagged by state security forces, the Cordillera leader’s family fear for his safety, especially with the police’s bounty announcement and shoot-to-kill order.

“We are determined to pursue the case of indigenous peoples activist Windel Bolinget in this ongoing independent investigation.” Murphy said.

“The absurd cases filed against him causing fear for his life and the safety of his family are testaments to the terror human rights defenders face in the Philippines.”

Edre Olalia, NUPL President who also serves as transitional president of the International Association of Democratic Lawyers, said should the Philippine government refuse to allow entry of investigators, there will be a group of collators to conduct person-to-person interviews, carry out recorded public sessions, or virtual hearings.

“Despite the difficulties, I think we can go around it because there are many ways and forms to gather information,” said Olalia.

“As far as the Philippine government is concerned, the world is closing in,” he said. Apart from the UNHRC’s “limited mandate,” he also noted growing concern in the United States Congress, the European Parliament, and the European Council, as well as the statements of the UN’s special rapporteurs.

Ysh Cabana is a writer and community organizer living in Toronto. He is also a member of BAYAN-Canada, alliance of progressive Filipino groups.