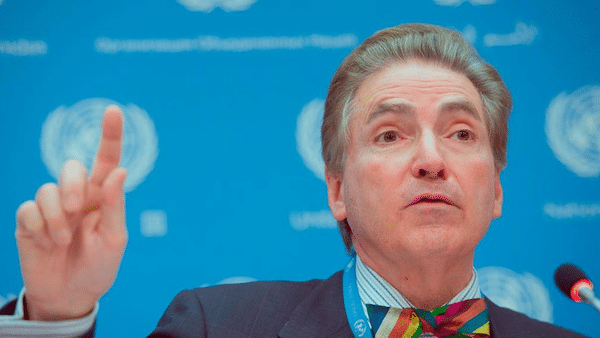 The following is an extract from an interview conducted by Italian journalist Geraldina Colotti with former UN Rapporteur for Human Rights and international law expert Alfred de Zayas.

Geraldina Colotti (GC) – There is much talk of human rights in this third millennium, but there seem to be no obstacles to their violations, starting with the denial of basic rights such as food, health, housing and free education. What is your conception of human rights and what can be done to ensure that the international institutions designated to defend them actually fulfil their role? Is this possible today, considering the current international situation?

Alfred de Zayas (AdZ) – Indeed, a “human rights industry” exists, and many officials of the UN’s Office of the High Commissioner [for Human Rights], diplomats, activists from non-governmental organisations, human rights teachers, and, of course, also many “independent experts” and rapporteurs are more or less opportunistic.

These people consider themselves “better” than others, but do not necessarily feel solidarity with the victims of human rights violations. Some of my bosses were models of integrity and professionalism, such as Professor Theo van Boven, Professor Kurt Herndl, Judge Jakob Muller, or High Commissioners Bertrand Ramcharan and Navi Pillay, but many others are simply there for good pay, prestige and other benefits.

My philosophy on human rights is as follows: all human rights derive from human dignity, which is inherent in all women and all men. They require a recognition of the equality of all of God’s children, of the whole human family, and require respect for a dignified life, which means having access to the basics of food, water, medicine, housing, employment, etc. The right to life necessarily means the right to a cum dignitate life [dignified life]–and respect for others through the sic utere tuo ut alienum non laedas [use your own property in such a manner as not to injure that of another] principle. We also need personal freedom, the right to truth, to information, to freedom of opinion, the right to make mistakes and to start over.

Geraldina Colotti (GC) – Recently, a report of yours on human rights in Venezuela caused a sensation. In it, you highlighted the responsibility of the so-called “sanctions” imposed by the United States and its allied countries, coercive and unilateral measures that the UN considers crimes against humanity. How did you get to that report and what consequences did it have on your work?

Alfred de Zayas (AdZ) – Twelve of my fellow rapporteurs had previously requested to be invited to visit Venezuela on an official mission without success. That intrigued me. In addition, Venezuela has always interested me, since it is a country close to Cuba [where de Zayas was born before his family migrated to the U.S.] with a similar culture and music.

Of course, I had read a lot about the so-called “humanitarian crisis,” and I wanted to investigate. Much to my surprise, my request was approved [in 2017] by Venezuelan Foreign Minister Jorge Arreaza. Of course, I was indoctrinated like everyone else, since before my trip to Venezuela I had read the information available–the studies of the Office of the High Commissioner (in 2017 the office was held by Mr. Zeid Raad el Hussein), of the Inter-American Commission on Human Rights, Amnesty International, and Human Rights Watch (HRW) (1).

My visit opened my eyes, and I realized that the media narrative does not correspond to reality. I spoke to a dozen ministers, but also with the opposition, with the Chamber of Commerce (Fedecámaras), with the Churches, with the Jesuit Priest Numa Molina, with about 40 non-governmental organisations, Amnesty, HRW, Provea, Fundalatin, the Sures Group, the National Network of Human Rights, with teachers and students. My two meetings with [Economics] Professor Pasqualina Curcio of the University of Caracas were also important. Her four books on the crisis impressed me, especially The Visible Hand of the Market.

My main concern was to listen to all parties–audiatur et altera pars [listen to the other side]– and to quickly evaluate all the documents provided to me and which I myself got my hands on. I concluded that the “crisis” has two main causes: dependence on the oil sales and the [2014] dizzying fall in prices on the one hand, and Washington’s economic war since 1999, the financial blockade, economic sanctions and all efforts to overthrow Nicolas Maduro through chaos and sabotage on the other.

Before, during and after my visit I suffered a series of threats and a campaign of insults and discredit that I had never suffered in relation to my other thirteen UN reports. Unfortunately, the Office of the High Commissioner did nothing to protect my integrity, my honour or my reputation.

However, I am very pleased to have achieved a constructive relationship with the Venezuelan government, which respected my report despite it making some harsh criticisms. The government also took into account several of my recommendations, including the establishment of cooperation agreements with the Food and Agricultural Organization (FAO), the World Health Organization (WHO), the UN Human Rights Council, etc. Likewise, it heeded my calls for the release of some detainees, including the well-known opponent [and campaign manager to twice presidential candidate Henrique Capriles] Roberto Picón. This I recommended after having spoken to his wife and Roberto Jr. (a very nice young man) and having studied his case, which I considered meritorious.

Caracas has since continued to cooperate with me. In 2018 and early 2019 I personally advocated the release of a German journalist named Billy Six. He was granted freedom. Six published a long article on this in the summer of 2020. In other words, my mission was successful because I did not position myself as an a priori condemner, but went to listen, to learn, to evaluate. I then went on to make pragmatic recommendations which the government evidently considered well-founded.

Geraldina Colotti (GC) – How do you evaluate other information that has been produced about Venezuela, both by [UN High Commissioner for Human Rights] Mrs Bachelet and also a group of so-called ‘independent’ experts, people who have also been accused of being involved in human rights violations in Chile and other places?

Alfred de Zayas (AdZ) – I had a lot to do with the creation of the Caracas-based Office of the High Commissioner and Michelle Bachelet’s personal visit [in 2019]. However, no High Commissioner writes their own report. For that, there is a team in an office, and this team is unfortunately un-professional, very ideologised, neoconservative and a priori contrary to the Bolivarian Revolution.

I had to heavily criticise Bachelet’s first report [in July 2019], since it suffered from methodological problems and ignored a large part of the information presented by the government, by the victims of the guarimbas [2014 and 2017 violent street protests led by the opposition], by local organisations such as Fundalatin, Grupo Sures, etc.

Bachelet’s second report was better, and she already accepts in her public declarations that there is a significant and adverse impact of unilateral coercive measures, which she has called to be lifted, at least during the COVID-19 crisis. Bachelet has learned–and she listens to me. But she also listens to politicians.

The “report” of the so-called “independent experts” is shameful. They were never in Venezuela and rely on untrustworthy sources.

Geraldina Colotti (GC) – Based on your experience, what is the responsibility and what is the weight of the hegemonic media in presenting a distorted reality of Venezuela at an international level? What countermeasures can be taken within the institutions in which you work?

This is precisely why the hegemonic media tried to bury my report. In September 2018, when my report was submitted to the Human Rights Council, there was no reaction from the press, as I was not singing the song they were expecting. It was in January 2019, following Juan Guaido’s self-proclaiming as interim president, that the British journalist Michael Selby-Green did a very long interview with me, which was published in the Independent. After this, I received invitations to be interviewed by Sky News, Euronews, France24, Al Jazeera, ZDF/Arte, Democracy Now, The Real News, etc. I also managed to publish op-eds, but I could never publish or be interviewed by the New York Times, Washington Post, CNN, BBC, to whom I had offered my texts.

I found it surprising and shocking when the Georgetown Journal of International Affairs asked me for an article, which I wrote, and then they did not publish it “because of its content.” Incredible but true: a supposedly academic magazine asks for an article and then censors it.

Geraldina Colotti (GC) – The attitude of European governments towards Venezuela shows the contradictions that exist in terms of democracy and human rights: on the one hand, thunder against Trump (despite having supported him in his authoritarian and undemocratic attacks on the peoples of the south and defending Biden’s arrival). On the other hand, supporting the action of the self-proclaimed Juan Guaido, which is totally outside the parameters of representative democracy. How can this be explained and what could be done to make these elements emerge more so in international institutions?

Alfred de Zayas (AdZ) – These people have no shame, they are imperialists and neo-colonialists, they lack morality and coherence. What they do is extremely undemocratic, but they have the corporate press to justify them.

Geraldina Colotti (GC) – What is happening in the United States highlights the danger posed by the practice of creating false international institutions to approve authoritarian decisions that would not be shared by traditional bodies (such as the Lima Group and its related organisations). What is the awareness of this danger in an institution such as the UN, taking into account the crisis it is going through and which is highlighted by alternative proposals from Southern countries calling for deep UN reform?

Alfred de Zayas (AdZ) – The Lima Group is another embarrassment in a world of shameless people, acting in violation of articles 3, 19, 20 and others of the Organisation of American States (OAS) Charter, lending itself to anti-democratic manouvers by the infamous [OAS General Secretary] Luis Almagro and the demented Donald Trump. It’s time to move forward with deep reform.

The Community of Latin American and the Caribbean Nations (CELAC) already exists, but after the death of Hugo Chavez and the end of the governments of Luiz Inácio Lula and Dilma Rousseff in Brazil and Rafael Correa in Ecuador, CELAC has lost momentum. What I would like to see is a new Court of Human Rights in Latin America excluding the United States and Canada, whose view of human rights is basically imperialist and neocolonial.

Geraldina Colotti (GC) – An anti-blockade law was passed in Venezuela [2020]. In terms of international law, what hopes does Venezuela have of effectively counteracting the “sanctions” that have become laws in the United States?

Alfred de Zayas (AdZ) – U.S. extraterritorial enforcement laws such as the Helms-Burton Act of 1996 (under the presidency of Bill Clinton!) are illegal under international law. But strength is strength, and the U.S. has blackmailed the whole world.

I don’t think the anti-blockade law in Venezuela can change things. This can only be achieved through international solidarity: when 160 countries refuse to implement U.S. extraterritorial laws; when Europeans decide to respond to U.S. sanctions with their own sanctions against the US; when the International Court of Justice takes Venezuela’s case and clearly states that these sanctions are inconsistent with the UN Charter; when the International Criminal Court says sanctions and blockade constitute crimes against humanity as defined in article 7 of the Rome Statutes; when the world recognises that sanctions kill.

(1) Many of these institutions or organisations have been accused by Caracas of politicising human rights to further right-wing, pro-Washington regime change objectives, and of ignoring on-the-ground testimony and evidence presented by government agencies that act to apply justice.