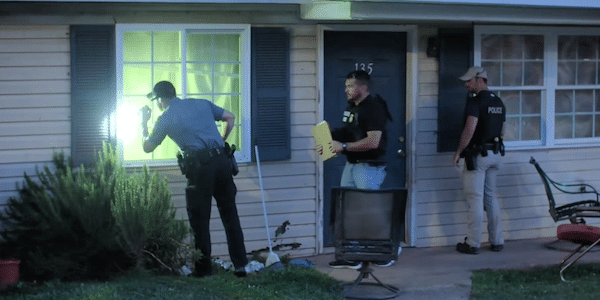 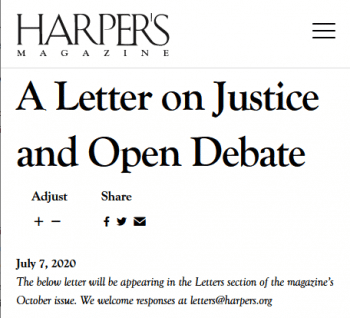 The Harper’s letter (7/7/20) decried “a new set of moral attitudes and political commitments that tend to weaken our norms of open debate and toleration of differences in favor of ideological conformity.”

A short and rather vaguely worded open letter published in Harper’s Magazine (7/7/20) earlier this month caused an unlikely media storm that continues to rumble on. Glossing over right-wing threats to the First Amendment, the letter, signed by 150 writers, journalists and other public figures, decried a new intolerance to dissent and a threat to freedom of speech coming from the left.

The vagueness of the letter was both its genius and its shortcoming, allowing people of all political persuasions to put their names to it, but also for others to read into it virtually anything they wanted. As the Los Angeles Times(7/9/20) described it, the letter became a “Rorschach test of subtext.”

The letter generated an explosion of takes and counter-takes, hailed as everything from a “welcome and long overdue” triumph (Washington Times, 7/13/20) to a “collective wallowing in self-pity” (In These Times, 7/7/20), leading to a debate about open debate and a great deal of speech complaining about speech.

However, much of the public discussion of the Harper’s letter misses the fact that it is the powerful, not the masses, who inordinately have the ability to “cancel” individuals for their actions, and that it is the left and those challenging power who consistently suffer the brunt of the consequences.

Chief among the threats to the First Amendment is the president himself. The Trump administration is currently suing a small news station in northern Wisconsin for running a political ad it (and countless others) aired but did not produce. They are not suing the well-funded Democratic Super PAC who paid for it, but instead are going after the messenger. While legal experts suggest that they have no case, Wisconsin has no laws against frivolous lawsuits, meaning the station will likely be bankrupted defending itself, something that appears to be exactly the point of the exercise: intimidating other media outlets into silence. 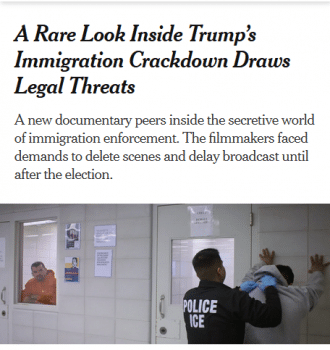 The makers of a documentary on ICE say they were “warned that the federal government would use its ‘full weight’ to veto scenes it found objectionable” (New York Times, 7/23/20).

The federal government is using the same tactic, using its full weight trying to suppress a Netflix documentary about ICE. The New York Times (7/23/20) reports that the government demanded the removal of scenes that showed the department terrorizing communities and breaking the law during arrests. Notably, the government is deliberately targeting the film’s small production company, not the giant streaming service, which has the resources to fight back. (“Several times, the filmmakers said, the official pointed out that it was their ‘little production company,’ not the film’s $125 billion distributor, that would face consequences,” the Times reported.)

Yet these direct attacks on the First Amendment received scant coverage in comparison to the Harper’s letter, or Times columnist Bari Weiss’ resignation from her newspaper, citing a stifling liberal atmosphere. Weiss’ leavetaking has been the subject of four CNN articles and over a dozen on Fox News, whereas the attempt to suppress the ICE documentary has not been covered by Fox, and has  been the subject of only one CNN piece (7/29/20)—a TV review that mentions the attempted suppression.

The Trump administration has also contravened the First Amendment in attempting to ban the release of material critical of the president. The Department of Justice is currently suing Trump’s  former National Security Advisor John Bolton for the publication of his memoir, The Room Where It Happened, claiming that Bolton’s embarrassing anecdotes represent a national security violation. “He must pay a very big price for this, as others have before him. This should never happen again!!!” Trump tweeted (6/20/20). Bolton faces possible criminal charges, as well as having any profits seized.

Similarly, the Trump family, represented by Donald’s brother Robert, used the courts to try to block the publication of Mary Trump’s book, Too Much and Never Enough, wherein the president’s psychologist niece diagnoses him as a narcissist with possible antisocial personality disorder.

The ‘Enemy of the People’

Perhaps most worryingly, a significant portion of the public is strongly supportive of Trump’s destruction of the First Amendment. A plurality of Republicans (43%) believe he should close news outlets engaged in “bad behavior,” and 13% of Americans (including a quarter of Republicans) think he should immediately close the Washington Post, New York Times and CNN.

The media, who President Trump infamously labeled the “enemy of the people,” have been subject to a generalized nationwide government assault in recent weeks.  According to the U.S. Press Freedom Tracker, there have been at least 585 incidents, including at least 84 journalists arrested, 137 shot by police or National Guard, 80 tear-gassed and 36 pepper-sprayed while covering the George Floyd protests. Some, like photojournalist Linda Tirado, have been left permanently disfigured from police attacks. The onslaught against the press is so bad that the United Nations has gotten involved, its human rights office condemning the arbitrary arrests, and the disproportionate and discriminatory use of force. 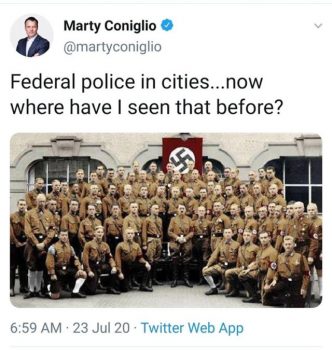 If you get fired for saying something like this (Twitter, 7/23/20), opponents of “cancel culture” won’t come to your defense.

But when 9News Denver meteorologist Marty Coniglio also condemned the state’s repression, he faced immediate consequences. After tweeting, “Federal police in cities…now where have I seen that before?” accompanying it with a picture of Nazi troops, he was promptly fired. James Bennet’s resignation from the New York Times for soliciting and printing an op-ed (that he admits he hadn’t read before publishing) calling on the military to crush the protest movement drew worldwide condemnation (even being obliquely mentioned by the Harper’s signatories as their primary piece of proof of an intolerant left). But Coniglio’s case, where he challenged power, not indulged it, has barely been reported outside of Colorado.

Coniglio’s case is indicative of the fact that the primary victims of “cancellation” tend to be the left and those challenging power. Earlier this year, David Wright, a longtime political journalist for ABC News, was suspended and permanently pulled from political reporting after he was secretly filmed, in private, criticizing his network and admitting that he is a socialist who likes Bernie Sanders (a popular position among Americans, but not among journalists at corporate outlets—FAIR.org, 3/8/16, 2/8/19, 7/26/19).

Those displaying insufficient enthusiasm for state violence from the US or its allies can also suffer immediate consequences. In February, journalist Abby Martin was barred from speaking at Georgia Southern University after refusing to swear an oath of allegiance to the state of Israel (something 28 states already make anyone receiving public money do). CNN fired its contributor Marc Lamont Hill in 2018 for criticizing Israel, and for calling for a free Palestine “from the river to the sea.” Going further back, Chris Hedges was forced out of the New York Times for his opposition to the Iraq invasion, a fate that also befell MSNBC’s Phil Donahue and Jesse Ventura.

Thomas Chatterton Williams, the organizer of the Harper’s letter, specifically warned that “Donald Trump is the Canceler in Chief,” and that his letter only addresses a small part of the threat to a pluralistic public discourse. Unfortunately, most of the debate in elite circles has ignored these far greater dangers in favor of focusing on overzealous Twitter users—perhaps because privileged journalists in corporate media have come to accept objections to their reporting from the powerful as inevitable, if not legitimate, whereas popular challenges to their reporting make them bristle with indignation. While the dangers of leftist “cancel culture” can be debated, there’s no denying the dangers of the government’s assault on the core American value of free speech.