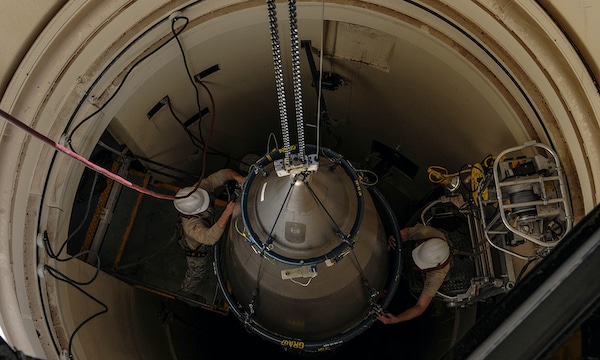 This week is the 75th anniversary of the U.S. bombing of Hiroshima and Nagasaki, the only time nuclear bombs have been used in a conflict—and one could only hope the last time. To commemorate the anniversary, I thought it would be appropriate to devote this column to taking a hard look at current U.S. nuclear weapons policy, and to do that, I had a chat with our new Global Security Program Washington representative, Kevin Davis.

Davis joined UCS fresh off of two cycles working on congressional and presidential campaigns. Prior to his electoral work, he spent a decade working on nuclear disarmament efforts, supporting passage of the New START arms control agreement, and promoting the international regime to stop the spread of nuclear weapons.

Late last month, the House and Senate hammered out their respective versions of fiscal year 2021 military authorization legislation, formally called the National Defense Authorization Act (NDAA). There has been considerable news media attention on a contentious provision that would rename military bases named after Confederate officers, but there are other items in the $740.5-billion bill that jumped out at Davis. At the same time the Trump administration has walked away from the Intermediate-Range Nuclear Forces Treaty, the Iran nuclear accord and the Open Skies Treaty, and is dragging its feet on extending the New START treaty, both chambers approved the administration’s proposal to boost spending on nuclear weapons by nearly 20 percent, which could set off another nuclear arms race. Some would argue that the Trump administration, which is forging ahead with plans to spend more than $1 trillion on nuclear weapons over the next 30 years, has already started one.

EN: First, I would like to welcome you to UCS. Given the work you were doing previously, your arrival was well-timed—just when Congress was debating the NDAA for the next fiscal year. The debate over how much to spend on the military comes at a time when the Trump administration has abandoned a number of bilateral and multilateral treaties and a Trump official casually talks about spending Russia and China “into oblivion” to win a new nuclear arms race. We don’t know exactly what will be in the final bill when the House and Senate reconcile their differences, which will likely happen in the fall, but we do have the House and Senate versions, which give us a good enough idea of what it will look like.

First, let’s address the overall price tag. Both versions of the NDAA calls for spending $740.5 billion, exactly what the Trump administration proposed in February, which is the most since World War II.

KD: That number wouldn’t be so appalling if it supported a coherent strategy to confront the threats we actually face. Last year, the Centers for Disease Control and Prevention’s budget was only $7 billion. That is basically a rounding error on the Pentagon’s budget. While COVID-19 is novel and was impossible to predict, that a highly communicable disease could lead to a pandemic in our interconnected world was not. The time to invest in solutions for our actual challenges is now, before they have the chance to completely alter our way of life. Climate change, food insecurity, lack of affordable health care, and lack of affordable housing are having and will continue to have a more profound effect on our citizens than some far off military adversary. We need to shift money wasted on unnecessary weapons systems and dead-end wars and apply it to more pressing needs.

The Pentagon’s fiscal year 2019 budget was nearly three times bigger than that of China and more than 10 times larger than Russia’s. The disparity in spending raises two important questions in my mind. First, if the most powerful military on Earth is threatened by China spending some $200 billion on its military, how must China feel about the United States spending more than $700 billion? And second, how is China able to so efficiently invest in its military? How is it able to get so much mileage out of $200 billion?

The “rise” of China is actually a perfect example of the U.S. government’s lack of strategy and foresight when it comes to security investments. China didn’t suddenly start spending $200 billion overnight. Over the last two decades, it gradually improved its military capability while holding defense spending below 2 percent of its annual gross domestic product.  It grew its military by growing its economy. During the same time period, the United States spent $13.34 trillion in inflation-adjusted 2020 dollars on its military and waged two costly wars in the Middle East.

Fortunately, this year there were some efforts in Congress to cut military spending. In May, nearly 30 House members sent a letter to the House Armed Services Committee urging it to reduce military spending to free up funding to combat what they called our “greatest adversary”—the pandemic. In mid-July, the Congressional Progressive Caucus called for an amendment to the NDAA that would slice the proposed budget by 10 percent—$74 billion—and repurpose that money to fund healthcare, housing, and education initiatives in marginalized communities. The amendment lost, but it did get 93 votes in the House and 24 in the Senate. These numbers would have been unheard of not that long ago and hopefully this emerging movement to cut military spending can gain some momentum going into next year.

Congress should retire ICBMs, not buy new ones

EN: Both the Senate and House also rubber-stamped the president’s $44.5 billion request for nuclear weapons programs, which amounts to a 19-percent increase over last year’s allocation. Both bills include funding for the what the Air Force has dubbed Ground-Based Strategic Deterrent missiles, new intercontinental ballistic missiles (ICBMs) that would replace the 400 Minuteman III ICBMs by 2027. Do we really need to spend a projected $100 billion on new ICBMs?

KD: The UCS Global Security Program released a report in June that concluded that ICBMs, which comprise one leg of the U.S. “nuclear triad”–the other legs are bombers and submarines— are not only superfluous, but they actually increase the risk of nuclear war.

ICBMs may have made sense 60 years ago, when they were more accurate and powerful than submarine-launched ballistic missiles and communications links with subs were unreliable. It is a very different story today. Sub-launched missiles are as accurate as ICBMs—if not more so—and the Navy has secure submarine communication links, making the ICBMs unnecessary.

One other key point: Submarines at sea are virtually undetectable, so they’re invulnerable, while ICBMs in their silos are sitting ducks. And these aren’t theoretical weapons. They sit in silos in Colorado, Montana, Nebraska, North Dakota, and Wyoming. And because they are in those silos, Russia has ICBMs of their own aimed at them. Their vulnerability has prompted the Air Force to keep them on high alert, which is dangerous and could trigger a nuclear war.

EN: How could that happen?

KD: The Air Force maintains the missiles on high alert so it can launch them before they could be destroyed by an incoming Russian nuclear attack. But it takes only 30 minutes for a long-range missile to travel from Russia to the United States, so the president would have only a matter of minutes to decide whether to launch U.S. ICBMs in response without knowing for sure that the attack warning was accurate.

That scenario has played out more than a few times over the last 50 years. There have been a number of close calls where human or technological errors led both the United States and Russia to prepare to launch their nuclear weapons. Fortunately, cooler heads prevailed, but you never know when luck will run out.

Our report recommended taking ICBMs off high alert and eliminating the option to fire them in response to an attack—rather than wait for confirmation—which would preclude re-alerting the missiles in a crisis.

In any case, even if the Pentagon retains ICBMs for the foreseeable future, there is no technical reason to build the new Ground-Based Strategic Deterrent missiles instead of extending the life of the current Minuteman missiles, which would be far less expensive.

Some members of Congress have argued that it would make sense to keep the Minuteman III nuclear missiles around longer and move $1 billion from the Ground-Based Strategic Deterrent program into a Pentagon pandemic preparedness fund. Unfortunately that didn’t happen.

EN: Last May, it was reported that the Trump administration is considering resuming underground nuclear weapons tests, which came as a big surprise. Even though the Senate has never ratified the Comprehensive Test Ban Treaty—which the United States signed the day it opened for signature in 1996—the United States has not conducted an explosive nuclear weapon test since 1992. What did the House and Senate ultimately decide to do about this controversial idea?

KD: After that story ran in the Washington Post, two representatives from Nevada—Dina Titus and Steven Horsford—filed a bill that would block funds for such a test. Eighty-two members of Congress also sent a letter to President Trump calling it an “awful idea” that is “scientifically, technically unnecessary” and “dangerously provocative.”

A week or so later, behind closed doors, 14 Republican senators inserted $10 million for nuclear test preparations into their defense bill. This prompted the Democratic-controlled House Appropriations Committee to bar dollars from fiscal year 2021 or any prior year from being spent on nuclear testing. And to send an even stronger message against resuming nuclear tests, the House took a roll call vote on the matter and 227 representatives affirmatively stated that no funds can be spent “to conduct or make preparations for any explosive nuclear weapons test that produces any yield.”

This vote highlighted how bad an idea it would be to resume testing. As we’ve already discussed, House Democrats went along with the president’s budget request for nuclear weapons this year. They signed off on buying more than 600 brand-new, nuclear-tipped missiles to replace the ICBMs we already have, missiles that the Air Force certified are good through 2036. They also okayed expanding the production of plutonium pits—the trigger in the nose of a nuclear-tipped missile. But when it came to testing, they said:

It is our job as advocates to make all nuclear weapons issues as clear-cut as nuclear testing. Folks can grasp testing. They’ve seen the videos of past tests. We need to do a better job of making these ever-increasing investments in nuclear weapons tangible as well.

Elliott Negin is a senior writer in the Communications Department at the Union of Concerned Scientists.