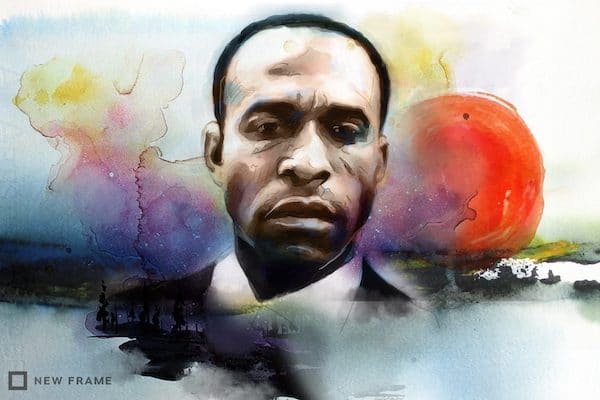 We inhabit extraordinary times, times in which we are acutely aware of the intensity of what political thinker Frantz Fanon called “the glare of history’s floodlights”. Around the world, the pandemic has thrown new light on old inequalities. From the United States to Brazil and South Africa, it is those who had already been rendered acutely vulnerable who are on the front lines of caring for those with private healthcare.

And then there was the rebellion. The velocity and scale at which the rebellion against police violence that began in Minnesota moved through the U.S., and then other parts of the world, was astonishing. Many were reminded of Lenin’s observation that “there are weeks where decades happen”.

Thinking about this moment with Fanon, we need to be aware of continuities and discontinuities–or as he puts it, an opacity–between the ages. Fanon is always speaking to us, but often in ways we cannot hear. We have to work to listen to him, and understand the new contexts and meanings in relative opacity. It is this constant dialogue that helps illuminate the present and enable ongoing fidelity to Fanon’s call in the conclusion of The Wretched of the Earth to work out new concepts.

One of the concepts central to Fanon’s thought is the idea of “the rationality of revolt”. In the chapter titled “Medicine and Colonialism” in A Dying Colonialism, he connects his work to hearing symptoms speak in the hospital to hearing quotidian resistances in daily life: “It is necessary to analyse, patiently and lucidly, each one of the reactions of the colonised, and every time we do not understand, we must tell ourselves that we are at the heart of the drama, that of the impossibility of finding a meeting ground in any colonial situation.” In other words, understanding requires both careful and critical listening aware of meaning and context.

The important first step is to recognise that we don’t understand. In other words, rather than fitting these reactions into a readymade scenario, we begin with an absolute, “the impossibility of finding a meeting ground”, but this itself also could become an abstraction that effectively limits any further work. The hospital itself is such a space.

In the eyes of the psychiatrist, the patients are deemed as mad and therefore irrational and thereby in need of control (and medication). In the colonial hospital, ethnopsychiatry generalises the pathologisation. Politically, then, Fanon insists on self-critical reflection to enable listening as a first step towards understanding. It is on this basis of working with those who are considered external to history and rationality that new concepts are allowed room for their own development.

Understanding thus requires both critical listening and the development of new concepts through which to hear, with each dependent on the other. In The Wretched of the Earth, this is connected with the idea of the rationality of revolt, which becomes a new beginning that opens up both action and thought. And Fanon immediately adds a critique of the old leadership and old politics, which wants to close down thinking into a series of reformist demands constructed by old concepts.

“In defiance of those inside the movement who tend to think that [nuance and] shades of meaning constitute dangers and drive wedges into the solid block of popular opinion”, thinking becomes alive and principles are actually “worked out” in the struggles for freedom. This is a new form of political activity based on real action “living inside history” where people, he adds,

take the lead with their brains and their muscles in the fight for freedom.

This thinking challenges revolutionary intellectuals to help work out the movement’s own self-clarification, to help develop what the movement itself is revealing. As Fanon puts it, these “unexpected facets… bring out new meanings and pinpoints the contradictions camouflaged by these facts”.

It is in the working out of these unexpected facets that Fanon’s discussion takes on an important class dynamic. The nationalist elite’s unpreparedness, the lack of practical ties, their colonial mentality and their cowardice “derives”, he says, from their “incapacity… to rationalise popular praxis, their incapacity to attribute it any reason”. It betrays an elitist attitude toward mass action, which it tries to control or suppress. It means the continuation, by other means, of the regime of necropolitics.

Hemmed in, crushed, denied space, food and clean water, Fanon’s description of colonial space in The Wretched of the Earth and the colonial world as a motionless and Manichean world of statues has rightly been considered one of his most important contributions. While space is absolutely essential to his analysis, so too is time. As he says in Black Skin White Masks, “the problem considered here is one of time”.

He refuses to consider the present as definitive and searches for notions of the future in the present, or as he wonderfully phrases it, the Algerian revolution being “no longer in future heaven” but in the radical actions and consciousness of the people. The idea of the future time in the present is similar to Karl Marx’s description of time as “the space for human development”.

In The Wretched of the Earth, Fanon also asks about the timing of revolt. “In this atmosphere of violence… which is just under the skin… What makes the lid blow off?” It is impossible to predict but then, in retrospect, it is an “event”. As we look back over the past few months and their concatenation of events, it seems so obvious.

In A Dying Colonialism, Fanon explains the event as an opening into historical time, a time in which the oppressed become historical actors, and the future suddenly becomes a matter of contestation:

Before the rebellion there was the life, the movement, the existence of the settler, and on the other side the continued agony of the colonised. Since 1954… in Algerian society, it seems, things no longer repeat themselves as they did before.

Fanon dates the rebellion to 1 November 1954, the day that the National Liberation Front launched a number of attacks in Algeria against French colonial forces. For Fanon, it was an extraordinary declaration of intent against the odds that led to a radical change in consciousness among the colonised.

What is also obvious is that the spontaneity of popular actions is not simply spontaneous but the result of ongoing thinking and organising. When demonstrators in Bristol, England, pulled down the statue of slave trader Edward Colston and dumped it in the same harbour where his slave ships used to dock, there is thinking, a rationality of revolt intimating a different world. When demonstrators deface the statues of “national heroes” such as George Washington in the U.S. and Winston Churchill in the UK, they express a moment of decolonialisation reminiscent of Fanon’s opening pages in The Wretched of the Earth.

There, Fanon talks about another notion of time and dignity, one that is fully integrated with a conception of human life and one that humanises and socialises the individual. Critical of the betrayal by the nationalist elites, he says “the yardstick of time must no longer be that of the moment or up till the next harvest, but must become that of the rest of the world”. Fanon immediately links that to “humanising work”. Today, his idea of the “rest of the world” takes on a significance that is universal and urgent in this moment of climate extinction and global pandemic.

It is a notion of time, liberated from the colonial foreclosure of possibility and capitalist time dominated by dead labour. Time, instead, is connected with life and self-determination, the development of a historical subjectivity that emerges through struggle. Nothing, however, is automatic. Fanon’s notion of time is also extremely sensitive to the psychological situation that people find themselves in, including the weight of collective trauma and prospects for future health that only time will fully reveal. He is aware that the process of creating actional people liberated from internalised inferiority is going to take time, insisting there is no magical process, no leader, no other who will do it for us.

In a certain way, you could say this way of taking measure of time echoes Marx’s idea of time and his critique of capitalism’s commodification and disposal of human time. What is time for capitalism but opportunity for profit? In Grundrisse, Marx contrasts a struggle over time and labour (forced and free), understanding a wholly different and more freely associated notion of labour time.

Marx writes, with glee, about an article in The Times of London about the cry of outrage of a West Indian plantation owner at the free blacks of Jamaica, who produce “only what is strictly necessary for their own consumption, and… how they do not care a damn for the sugar and the fixed capital invested in the plantations, but rather observe the planters’ impending bankruptcy with an ironic grin of malicious pleasure… They have ceased to be slaves,” says Marx,

but not in order to become wage labourers… As far as they are concerned, capital does not exist as capital, because autonomous wealth as such can exist only either on the basis of direct  forced labour, slavery, or indirect force labour, wage labour.

Fanon sustains a fundamental sense of movement and opening to the future, in the form of a critical, questioning mode of praxis. He concludes his first book, Black Skin, White Masks, with a prayer.

O my body, make of me always a man who questions!

In his final text, The Wretched of the Earth, there is a radical questioning from within the revolutionary movement. “Perhaps we need to rethink everything,” he says, connecting his notion of the future as a “limitless humanity” to new ways of life. “Perhaps it’s necessary to begin everything all over again: to change the nature of the country’s exports… to re-examine the soil and mineral resources, the rivers and–why not?–the sun’s productivity.” There’s an ecological dimension here essential to human life and dignity.

What is the struggle really about? It is a reaching toward a new humanism based on self-determination, uprooting the alienated social relations of a racist and colonised society. “If conditions of work are not modified,” he adds, “centuries will be needed to humanise this world which has been forced down to animal level by imperial powers.” He’s talking about the forms of forced labour called freedom in neoliberal and neocolonial capitalism that consume life and environments. We know very well, we no longer have centuries. The time is now.