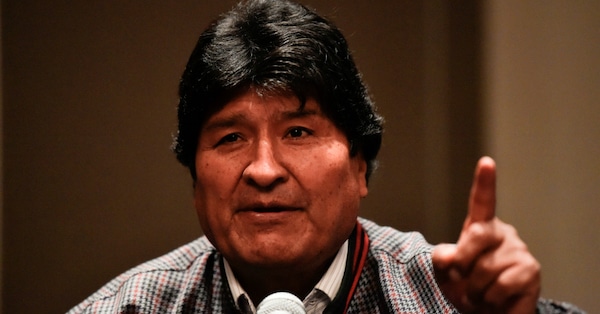 Lauca Eñe – RKC – Former Bolivian president Evo Morales Ayma, speaking to Radio Kawsachun Coca on the occasion of the 195th anniversary of the Armed Forces, denounced that according to his information, the government and the military are preparing a coup d’état to prevent the holding of general elections.

“Last minute information, I denounce that General Ivan Ortiz Bravo, head of the third department of the Armed Forces Command, on the instruction of the commander in chief of the Armed Forces, General (Sergio Carlos Orellana), has a coup d’état plan, for some two months, the military patriots informed me that they want to form a civil and military government, now, and they have that plan” he said.

He added that two U.S. planes arrived a few days ago, bringing military equipment, “we don’t know if it’s a donation or a purchase, the army’s immediate response team has been mobilized” he added.

He also reiterated the accusation he made last week that snipers from the Challapata and Sanandita regiments were deployed, which he said were in the tropics and in the city of El Alto.

The former president warned that the government decided to remove the blockade; “yesterday the de facto government again prepared a supreme decree for the armed forces and police to intervene in blockades, especially in the tropics of Cochabamba and Yapacani, using 22 and 25 calibre weapons, and then to say that the demonstrators killed each other,” he said, alerting the organizations mobilized in the country.

“I have this information because there are soldiers who are not with the coup d’état, they are new generations, sons and daughters of the people, I call on them to be with their people, with their fathers, don’t risk the lives of the soldiers, and officers, They have so many people infected with the coronavirus, COSMIL has totally collapsed, and to obey a de facto government with the repression against the people, once again they have a decree ready, I don’t know if they have signed it, until last night it was ready, just like they prepared a decree for the massacre in Sacaba and Senkata.

Bolivia's regime is terrorising the population by sending planes to fly at almost ground level over protesters. They're preparing for a massacre.
Vid: @canela_cs pic.twitter.com/sn4Zy5aJm6

Morales said that according to the report he has, they are preparing to take over the installations of Radio Kawsachun Coca. “They want to take over the media that reports the truth and that gives us coverage,” he said in time to ask the bases to organize themselves into defense committees or vigils, to defend the community radio stations in particular.

The international community must know what the social movements have already witnessed: Bolivia's armed forces and police committed the two massacres against unarmed people. Claims of protesters killing each other have the intention of delegitimizing the struggle for democracy. https://t.co/b4uTWrE0BU

Addressing the military he said, “To the soldiers of the country who accompanied me to guarantee the nationalizations, the economic project, I congratulate you on your day, to the patriotic military who are in the barracks who are thinking of their people the most, to liberate them and not to subdue them, not to repress them, repression is synonymous with domination, synonymous with foreign invasion, the armed forces have to guarantee the sovereignty and independence of the state, the dignity and integrity of the people, armed forces that do not guarantee sovereignty and independence, make a country a colony of the United States so that they can plunder the natural resources, which is why I conclude that the patriotic military, the soldiers of the fatherland who are at the service of their people, together with their people, have a thousand congratulations”.