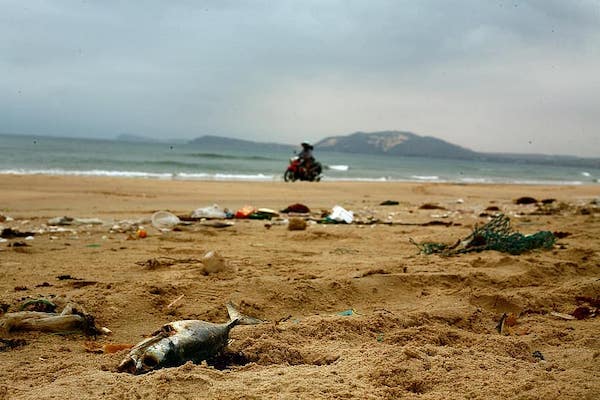 “Let us not, however, flatter ourselves overmuch on account of our human victories over nature. For each such victory nature takes its revenge on us. Each victory, it is true, in the first place brings about the results we expected, but in the second and third places it has quite different, unforeseen effects which only too often cancel the first.” —Frederick Engels

Talk about bad timing. This year’s Shelfwide Hypoxia Cruise, the annual scientific expedition that measures oxygen-depleted waters off the Louisiana coast, started on July 25, just after Hurricane Hanna raged through the area. High winds and waves continued through the cruise, thoroughly mixing the water column: high-oxygen surface waters were forced deep, and low-oxygen bottom waters were pushed off the continental shelf.

As a result, the official area of year’s dead zone is 5,048 square kilometers, the third-smallest since surveys began in 1985. Future charts and graphs will require a footnote, explaining that weather conditions produced a misleading result. 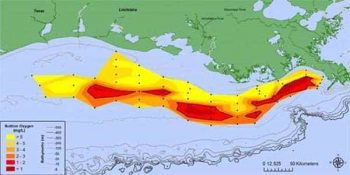 If the survey had been done a week earlier, or a couple of weeks later, the low-oxygen area would likely have been three or four times as large, because the conditions that deplete oxygen on the continental shelf haven’t changed.

In the summer of 1972, an environmental assessment study for a proposed oil facility off the coast of Louisiana found something unexpected–an area below the surface, where the water contained little or no oxygen. In waters that had long supported a large and profitable fishing industry, there were areas where fish couldn’t breathe.

Over the following decade, other low oxygen areas were found along the continental shelf, but no comprehensive study was done until 1985, when a research ship carefully measured what has become known as the dead zone. That expedition found that hypoxic (low oxygen) or anoxic (zero oxygen) conditions then covered about 10,000 square kilometers on the northern edge of the Gulf of Mexico, from the mouth of the Mississippi west to Texas. It extended up to 130 kilometers offshore, and from about 5 meters below the surface to the seafloor, 60 meters down.

Paradoxically, the dead zone is caused by too much life, by excessive plant and bacterial growth that leads to oxygen depletion in bottom waters. Each year, the Mississippi and Atchafalaya rivers carry about 1.6 million tonnes of dissolved nitrogen into the Gulf of Mexico. When the flow peaks in the spring and early summer, that influx of an essential nutrient overwhelms the region’s natural food webs, causing eutrophication–massive growth of marine vegetation. Single-celled algae called phytoplankton multiply into blooms far larger than zooplankton and other marine animals can eat. A huge amount of organic matter–dead algae and zooplankton excrement–sinks to the bottom and is decomposed by microbes, a process that consumes oxygen.

Oxygen from the surface normally replenishes deeper water, but the river water floats on top of denser salty seawater, creating a distinct layer that limits or blocks oxygen circulation. The combination of decomposed organic matter and water stratification generates hypoxic regions where there is too-little dissolved oxygen to sustain most animal life. The result has been called “ecological havoc.”

“On the surface, hypoxic waters can appear normal, but the bottom is eerily devoid of any living animal and littered with the casualties of suffocation. In extreme cases, the sediment turns black.

Fish can swim out of the hypoxic waters, or dead zone, to areas with life-sustaining oxygen levels, but other marine animals such as mollusks, anemones and worms cannot and die. Hypoxic waters kill high levels of aquatic species, disrupting the food chain and habitat.(2)

The gulf dead zone generally lasts until cooler weather or storms break the stratification and promote downward mixing of oxygen-rich surface waters. It returns the following year when snow melt and spring rains once again increase the flow of fresh water and nutrients.

The discovery of a dead zone in the Gulf of Mexico–and many more at about the same time–raised an obvious question: was this a previously undetected natural phenomenon? Cores drilled from the seafloor, containing decades of sediment, give the answer: yes and no.

Fertile soil naturally contains soil nutrients, and the Mississippi has been eroding soil and carrying it to the ocean for a very long time, so it is not surprising that oxygen was occasionally depleted in coastal waters in the past. However, sediment studies in the Gulf of Mexico prove that “the low-oxygen events of the last few decades were more extreme than any that occurred in the previous 150 years.”(3)

Research on low-oxygen areas in other parts of the U.S. and Europe leads to the same conclusion:

the modern aggravation of coastal hypoxia is unprecedented and … must have been forced by excess human-induced nutrient loading.

Evidence for accelerated eutrophication and worsening hypoxia exists in many estuarine and coastal ecosystems in the last half of the 20th century. These changes are consistent with population growth, industrialization, urbanization, increased combustion of fossil fuel, and increased use of fertilizers in the post-World War II era. Human activity that altered the delivery of nutrients to coastal waters did not begin just within the last 50 years, but the acceleration within the last 50 years has been a feature of cultural eutrophication, the ‘Anthropocene,’ in many developed countries.(6) 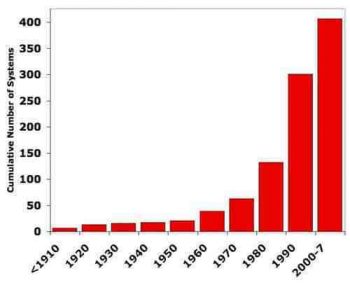 Not only have existing coastal dead zones been expanding and lasting longer, but there are more of them every year. In the 1960s, there were a few dozen relatively small coastal dead zones in the world. A 2008 study found more than 400, with a total area of 245,000 square kilometers; the authors calculated that the number of dead zones had “approximately doubled each decade since the 1960s.”(7) In 2019 researchers identified over 900 coastal areas that experienced eutrophication–over 700 of those were hypoxic.(8)

Those figures only include scientifically confirmed dead zones, so they omit parts of the world where monitoring and reporting of coastal water quality is limited or non-existent. In particular, although China is a major producer and user of synthetic nitrogen fertilizer, so far only a handful of hypoxic zones have been reported along its extensive coast. There are probably now more than 1000 dead zones world wide, and the number continues to rise.

Anthropocene scientists often use what have become known as the  “Great Acceleration” graphs to show that a new epoch in planetary history has begun. Historical trend lines for multiple categories of human activity and physical changes in the Earth System show a common pattern: many decades of little or no growth, followed by a sharp upturn in the mid-20th century.(10)

By no coincidence at all, graphs of the growth of coastal eutrophication and hypoxia are similar, although the upturns begin a decade or so later. Until the 1960s, there simply wasn’t enough reactive nitrogen in the environment to cause eutrophication on a major scale. Two of the Great Acceleration graphs–nitrogen production and fertilizer use–show why that changed.

Great Acceleration graphs for nitrogen production and fertilizer use, 1750-2010.(11)

As previously discussed in this series, all life requires nitrogen, but the naturally-available supply is limited, so organisms have had to evolve ways of using small amounts efficiently. Mass availability of cheap nitrogen fertilizer upset that balance after World War II, turning a natural shortage into a glut. A metabolic ceiling that had existed for millions of years was shattered in a few decades.

Between 1950 and 2000, worldwide use of synthetic nitrogen fertilizer increased from 4 to 83 million tonnes a year. This was one of the most important features of a global shift to industrial agriculture, which remains dependent on fossil fuels, genetically modified seeds, monocropping, and heavy use of chemicals.

Nitrogen fertilizers have substantially increased crop yields, but they are far from efficient–less than 20% of the nitrogen in fertilizer actually ends up in human food. The rest remains in the environment.(12) A significant portion is carried by irrigation or rain into streams and rivers. By the beginning of this century, the amount of nitrogen in many rivers was far above pre-industrial levels: 400% higher in the Mississippi, 800% higher in rivers in the northeastern United States, and 1000% higher in rivers that drain into the North Sea.(13)

The UN Food and Agriculture Organization says that,

In most high-income countries and many emerging economies, agricultural pollution has… overtaken contamination from settlements and industries as the major factor in the degradation of inland and coastal waters.(14)

In the Gulf of Mexico and many other coastal areas, marine ecologist Donald Boesch writes, the nitrogen glut has caused “explosive and synchronous intensification of eutrophication,” and “dramatic alteration of coastal ecosystems.”

The 1.6 million tonnes of nitrogen that pour into the Gulf of Mexico each year is 23% of the amount applied to crops in farms in the Mississippi River basin.(16) It is very clear that the only way to shrink the dead zone in the Gulf of Mexico is to reduce the amount of fertilizer used in the 31 states in the Mississippi River basin.

In 2008, the U.S. Environmental Protection Agency adopted an “Action Plan” developed by the Mississippi River/Gulf of Mexico Task Force. Its goal was to reduce the average size of the hypoxic zone to less than 5,000 square kilometers by 2015–“through implementation of specific, practical, and cost-effective voluntary actions.”(17)

Inclusion of the word “voluntary” was a victory for agribusiness interests that preferred to have no plan at all. In the following years the corporations that sell agricultural chemicals and profit from over-production of corn and soy actively resisted every attempt by state and local agencies to require changes that would protect waterways from fertilizer and other agricultural chemicals. As a result, when 2015 arrived, the dead zone was more than three times larger than the plan promised, so the Task Force extended the timetable by twenty years: the goal now is to reduce the dead zone to 5,000 square kilometers by 2035. If current trends continue, the timetable will have to be extended again.

This failure is not unique to the United States. The dead zone in the Baltic Sea is larger and in many ways more destructive than the one in the Gulf of Mexico. In 2007, the nine nations that surround the sea adopted an Action Plan “to achieve a Baltic Sea in good environmental status by 2021,” including elimination of eutrophication. They agreed:

In 2018, with only three years left to achieve those ambitious goals, a scorecard published by WWF found that “all nine Baltic Sea countries have failed to make good progress,” and that “eutrophication status of most parts of the Baltic Sea remains poor and even deteriorating in some sub-basins.” The overall results were “bleak and unsatisfactory.”(19)

In WWF’s view, “the Baltic Sea environment remains in a critical state due to lack of efficient delivery of measures and management.” But what their study actually reveals is unwillingness to challenge an agricultural system that, as sociologist Philip McMichael puts it, “is ultimately about combining commodified inputs (seeds, fertilizer, antibiotics, privately-owned genetic materials, pesticides and so on) with land or water or factory farms to produce outputs as ingredients of processed commodities to fuel labor or machinery, without regard for social or ecological consequence.”(20)

Unless fundamental changes are made to the agro-industrial system that rules today, coastal dead zones will continue to grow and multiply.