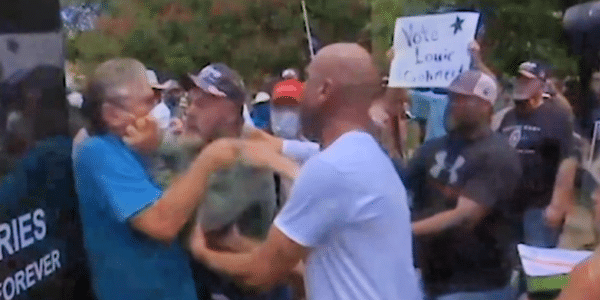 Hank Gilbert, the Democratic challenger to Rep. Louie Gohmert in Texas’ 1st congressional district, held a rally in Tyler, Texas, on July 26 against federal law enforcement agencies’ recent intervention in Portland, Oregon. But armed participants of a “Back the Blue” counter-protest crashed the event, beating and robbing attendees in the park. The attack injured a number of rally attendees, including Gilbert’s campaign manager Ryan Miller, resulting in at least two police reports being filed so far. 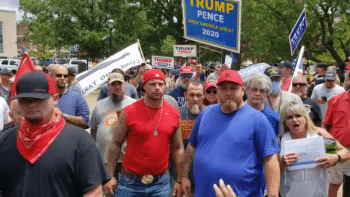 But you wouldn’t know any of this from following major media outlets. Since the attack, we could find no major national newspaper or TV outlet coverage of it at all.

Beyond a handful of local stories, the only media attention we found came from two liberal-leaning news sites (Salon, 7/27/20; Talking Points Memo, 7/27/20) and nine sentences at the end of an Associated Press article (7/27/20) on a similar attack two-and-a-half hours west in Weatherford, Texas.

The city of Tyler has made national news twice recently. NPR’s “In East Texas, Death of George Floyd Brings Activism to a Region of Rare Protest” (6/13/20) exposed the country to Tyler’s current political happenings and the long history of white supremacist violence there. The piece described an activist named Blue speaking at a Black Lives Matter event, wearing a bulletproof vest that extended to her knees while addressing threats on her life.

Only weeks later, a protest by student-athlete Trude Lamb against the name of her school, Tyler’s Robert E. Lee High, was featured on CNN (6/24/20). Both articles show that events in Tyler, a small East Texas city, are the results of national events, and also have implications for the rest of the country. 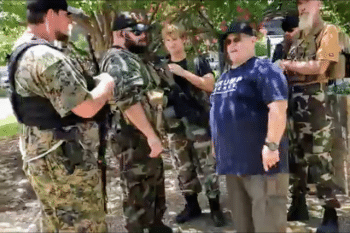 Screengrab from video shot by the Tyler Morning Telegraph (Facebook, 7/26/20).

Likewise, armed supporters of a far-right politician holding Confederate flags and attacking people in broad daylight in front of police, in a place like East Texas with a history of white supremacist violence, is an important event with national implications about the growing boldness and militancy of the far right. It is a critical example of the white supremacist violence that has skyrocketed in response to the George Floyd uprisings.

Major media’s silence is also striking in light of Gohmert’s infamy across the country for a number of incidents which include, in the last year alone, being one of the four (out of 414) votes against an anti-lynching bill, outing an impeachment whistleblower on the House floor, drafting a resolution to ban the Democratic Party for its “loathsome and bigoted past,” and, most recently, testing positive for COVID-19 after refusing to wear a mask.

In addition to the lack of national coverage, much of the local coverage of the attack portrayed the events as a “clash” (Dallas News, 7/27/20) or “brawl” (KETK, 7/27), as opposed to the targeted political violence that it was. 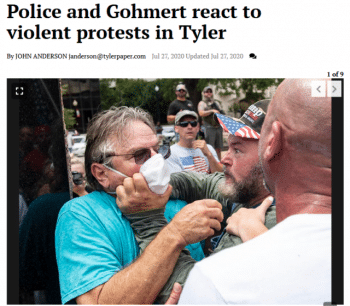 The Tyler Morning Telegraph (7/27/20) reported that supporters of candidate Hank Gilbert like the one at left “felt they were attacked.”

This was typified by a lead from a piece in the Tyler Morning Telegraph (7/27/20) which read, “A small group of people…felt they were attacked Sunday by a large crowd with Trump signs and shirts.” The reporter who wrote the article was there live-streaming the event as the attack happened (Facebook, 7/26/20—see 16:00); he should be able to confirm whether or not Gilbert’s supporters were attacked. (The header image for the article provides an additional clue, showing one of those supporters being choked by a man in a Trump hat.)

Gohmert himself deploys these same tactics. In a statement to the Morning Telegraph (7/30/20), he says of the attack and the videos,

It is difficult to tell, from what I understand today, who started what.

Whether this obfuscation comes from Gohmert or reporters, it has the same effect: It creates and deploys a narrative of “both sides” to justify the political violence of one side, and it ignores facts and uses neutered language to cloud who actually perpetrated the violence.

The end result of national media’s neglect and local media’s muddling is the erasure of right-wing political violence, sending a message to would-be future attackers that there will be no consequences for their actions.