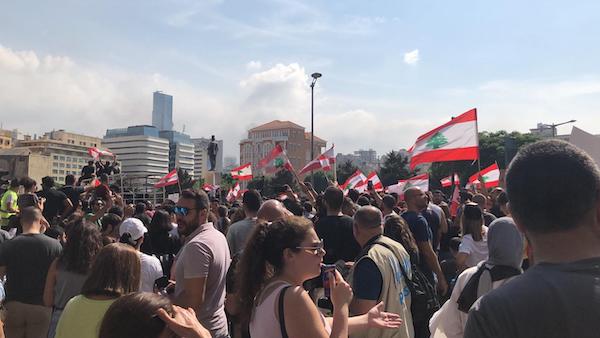 THE tragic events unfolding in Lebanon are a portent of things to come for the entire third world. Lebanon, a small, highly import-dependent country, has been in the grip of an economic crisis for quite some time as the world recession has become more acute; and with the coronavirus crisis, Lebanon’s economy has been reduced to utterly dire straits. Its two major sources of foreign exchange, tourism and remittances from the Gulf and elsewhere, have virtually dried up owing to the pandemic, causing its currency to depreciate massively, its external debt to be impossible to service, and its ability to import essential commodities which are the lifeline of the population to be severely curtailed. This has led to huge shortages and a rampaging inflation, estimated at 56 per cent per annum. With unemployment currently estimated at 35 per cent, there has been a massive increase in poverty; indeed half the population of the country today is below the official poverty line.

All these phenomena however were already present even before the pandemic; the pandemic has accentuated them greatly. They are phenomena which can be found almost everywhere in the third world and they follow from the pursuit of neoliberal policies, which tightly link the fate of these economies to developments in the world economy.

The Lebanese government is seeking at least $10-15 billion of external loans immediately, but since it defaulted on its international debt payment obligations in March, no new loans are forthcoming. The government, not surprisingly, has become unpopular; and this unpopularity has been fed by a narrative about Lebanon’s economic travails that lays the blame for it on the “rampant corruption” afflicting the government and the political class generally.

This corruption narrative is neither new nor surprising nor false; but it serves to distract attention from the structural crisis in the country caused by the pursuit of neoliberal policies in a world economy slipping into recession.

Governments over much of the third world are corrupt, but this corruption narrative as the cause of a country’s crisis is flawed for two obvious reasons. First, it is insufficient for explaining the pervasive nature of the crisis, as indeed of the fact that the crisis is not confined only to third world countries but afflicts much of the advanced capitalist world as well. Secondly, rampant corruption is itself a feature of the neoliberal economic regime. True, corruption was there earlier as well. It is also true that a regime marked by controls, as was the case earlier, lends itself easily to corruption; but so does a regime marked by large-scale privatisation, and by substantial largesse from the State exchequer to the capitalists. In fact the scale of corruption is much larger under the latter regime, that is, the neoliberal regime.

Against this backdrop of popular anger against the government that was perceived to be inflicting the crisis because of its widespread corruption, there was the tragic explosion in Beirut. A dangerous stockpile of ammonium nitrate near the port of Beirut caused the explosion which killed 200 people, injured 5000 and rendered vast numbers homeless. This has further inflamed popular anger against the government and the political class, and led to street demonstrations for a regime change which have led to clashes with the police, injuring nearly 500 people as of now.

There is nothing surprising or unprecedented about such popular demonstrations demanding a regime change in a crisis-hit country. What is of significance is the use being made of this situation by imperialism.The first metropolitan leader to land in Beirut after the blast was Emmanuel Macron, the French president whose main claim to fame is that he is better than Marine Le Pen (his election was facilitated by the fact that the French electorate rightly preferred the non-fascist Macron to the fascist Le Pen). In a blatant display of imperial arrogance, reminiscent of the days before the Second World War when Lebanon was part of the French colonial empire, he announced assistance for the Lebanese people, provided “political and economic reforms” were undertaken. Then the United States jumped in with support for the demonstrators, with statements like “the Lebanese people have suffered too much”, and “the United States has long supported the Lebanese people’s pursuit of economic prosperity and accountable governance, free of corruption and foreign pressure”.

Let us for a moment assume that the denouement desired by the imperialist countries does come about. The external loan they will arrange will have to be paid back after some time. Where will the resources for such repayment come from? True, the end of the pandemic will give rise to some improvement in tourism earnings and also in remittances. But Lebanon’s crisis is not caused only by the pandemic; it predates the pandemic, though much accentuated by it. After all, in March itself, we have seen, Lebanon had defaulted on its external debt payment. It follows that, like in the case of other third world countries, its crisis has its origins in the slowing down of the world economy, which is not going to be reversed in the foreseeable future. To extract loan repayment therefore,“austerity” measures will have to be imposed which will reduce the incomes in the hands of the people.

While the availability of loans will immediately ease the balance of payments constraint somewhat, and hence reduce to some extent the prevailing rate of inflation, the imposition of “austerity”, by lowering people’s money incomes, will hurt them in a different way. At the same time, the exploration of any option other than the pursuit of neoliberal policies, would have been prevented by the very availability of immediate foreign loans. Far from there being “economic prosperity”, the economic crisis of Lebanon therefore would just continue.

The Lebanon case is important because, notwithstanding the historical and geographical specificities of that country, it holds portents for the third world as a whole. As the third world continues to remain afflicted by economic crisis, imperialism will adopt a strategy whose contours are already visible in Lebanon.

Second, it will tie the crisis-hit economies even more closely to the neoliberal order. It will do so by making loans available to them to tide over their immediate problem, but imposing “conditionalities” which bind them even more tightly to neoliberalism. Thus in the name of overcoming the crisis caused by neoliberalism, imperialism will further increase the hold of neoliberalism on these economies.

It may be thought that such a strategy, since it cannot bring any improvement in the conditions of the people, cannot possibly work for long. But capitalism’s concern is neither with improving the conditions of the people nor with what happens in the long-run; its concern is with immediate threats to the neoliberal order. If people become worse off because of the way it deals with such threats, then so be it.