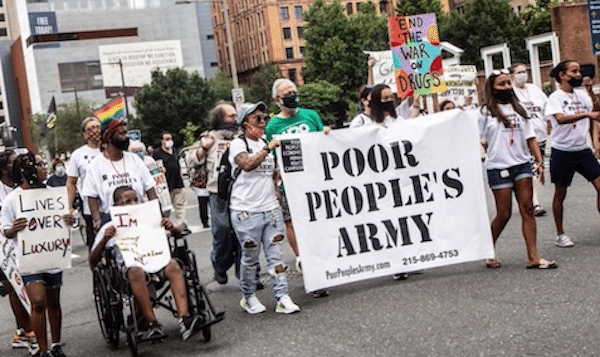 Cheri Honkala tells Ann Garrison that the Biden campaign headquarters threw up a rent-a-fence when they heard the Poor People’s Army was coming.

Cheri Honkala is a founder and coordinator of the Poor People’s Economic Human Rights Campaign (PPEHRC). We spoke after she was arrested outside Biden campaign headquarters on the opening day of the virtual Democratic National Convention.

Ann Garrison: I see you marched from Philadelphia’s Liberty Bell to Biden’s Philly headquarters and got arrested yesterday. What did you do to once again menace the foundation of our American institutions?

Cheri Honkala:  We challenged American institutions by saying they shouldn’t be run by corporations. But that’s America — the right to life, liberty, and the pursuit of happiness for rich people and corporations, and the right to struggle, get sick from preventable diseases, get shot on your block, and get locked up for poor people. We want a different America, a different world. We threatened the institution of the Democratic Party by pointing out all the issues they ignore.

I got arrested for “trespassing” on a sidewalk because the Biden campaign headquarters was too high-and-mighty to meet with us and decided to throw up a rent-a-fence the day before our widely publicized event. I hopped the fence to get our demands over to the building, which is normally open to the public just fine but that happened to be fenced off on the day that the Poor People’s Army had announced its plan to march there. We had business with Biden’s campaign: we wanted to talk to him as people who have legitimate grievances. We were exercising our 1st Amendment Rights, and I delivered our demands, which included:

AG: Tell us what’s going on in North Philadelphia and your neighborhood, Kensington, in particular.

CH:  People are shooting dope on every street corner out in the open. They are defecating in the streets, they are sleeping in the shit. They are selling their bodies for money. And 12-year-olds patrol their turf in bulletproof vests; teenagers have shootouts.

The cops sit in their cars, paid off or asleep, or harass citizens. Poor people live in an alternate reality. That’s why we did a “Poverty Reality Tour” for the presidential candidates on Monday morning, but only Green Party candidates Howie Hawkins and Angela Walker showed up. We have done these reality tours throughout the years, showing people what the poor neighborhoods, especially Kensington, are really like. And sometimes we create tours to show our own children what rich, gated communities are like because they haven’t been exposed to anything beyond the hood. We want them to dream big of the abundance of wealth that is available for all people, but that’s deliberately kept from them so that others can have four and five houses, and throw away as much food in one day as they eat in a week.

When people talk about “Third World countries” or the “developing world,” that’s where I live right here in the USA. And that’s how over half of all Americans live.

AG: NPR’s WHYY-Philadelphia’s report on your arrest says that Biden’s campaign headquarters there are right next to Philly City Hall and that they’d built a fence around it. That suggests they’re not much interested in unmediated contact with the general population there. Did they make any effort to campaign in Kensington or other poverty-stricken neighborhoods during the primaries?

CH:  The fence was new, thrown up the day before our march. It’s a busy, busy central city building. Perhaps one of the busiest buildings in Philly, with offices for all kinds of businesses and people. Then somehow, on Monday, opening day of the Democratic National Convention, when the Poor People’s Army was coming, they closed it off to the public. That’s not coincidence. That’s fear. The only efforts they make in our neighborhoods are to make sure that the dope flows freely, and the campaigns throw around enough money to get some people to show up and vote for them.

I ran for state representative three years ago in a special election, and because I ran as a Green, and people dared to come out and vote for me in a Democratic Party city; they were intimidated, and there were ultimately three voter fraud and intimidation convictions and one admission of responsibility in District 197 during my election.

The Democrats come at you hard if you are challenging them. They come harder at independents than at their so-called opposition party, the Republicans. Well, we’ve always been independent; poor people know that their problems aren’t magically solved by a Democrat in office. Most of us have lived under Democratic, so-called progressive mayors, and our lives continue to get worse and worse. We are here to announce our political independence, and we want a new system that puts #LivesOverLuxury. We know the Democrats and Republicans serve the interests of the rich, high-end luxury condo developers and buyers more than any kid in the city who didn’t have breakfast that morning, or any senior who is choosing to pay for a medication over a meal. This society is sick, and COVID-19 is just the latest example of preventable diseases that are killing off poor people while rich people profit and get all the best healthcare they need.

AG: What else is the Poor People’s Economic Human Rights Campaign doing to protest the virtual Democratic Convention?

CH:  The best thing we can do is to build our Poor People’s Army to  to challenge both the RNC and the DNC. And we did. We hosted an incredible People’s Movement Assembly on August 16th, and the #LivesOverLuxury March on August 17th. We used this time to discuss all the issues that impact us and come up with plans for our own solutions. We had people joining the Army left and right. We need to educate our soldiers about which side they’re on, how we challenge those in power, and, ultimately, how we take back the resources we need to survive, and how we survive and take power. We do that 365 days a year, but we always ramp it up every presidential year, and this was a huge success, especially given all the challenges of organizing during this pandemic.

AG: The actions you and the PPEHRC are best known for are homeless occupations of empty buildings. A sign displayed on your Facebook page says that there are ten empty houses in Philadelphia for every homeless person.

CH:  We have new research by a group of PPEHRC-affiliated geographers mapping out the number of abandoned properties in Philly compared to the number of homeless people. We found out there are ten vacant properties for every person experiencing homelessness. This absolutely matches with our lived experiences. Homelessness and gentrification get worse, exacerbated by the current economic and health impacts of COVID-19, and so the Poor People’s Army is expanding housing takeovers across the city and the country.

AG: I read WHYY’s report on the arrest, and their reporter seemed to be particularly concerned about whether or not PPEHRC members will vote for Joe Biden. Is there anything you’d like to say about this, particularly given that Pennsylvania gave its 20 electoral votes to Trump in 2016?

CH:  No matter who wins in November, we lose. Normal people lose. Poor people lose. As I said, the most progressive Democrats belong to a party that sells us out for the corporations in town. They hand out corporate welfare and tax abatements to corporations but cut cash assistance like General Assistance in PA. These policies kill people, and it’s both corporate parties that agree that luxury of the few is more important that the lives of the many. That’s why this was the #LivesOverLuxury March.

We on earth have an abundance of resources to take care of every human being. But it’s misdirected, it’s hoarded by the wealthy. Wealthy, empty high rises, and ten abandoned properties for every homeless person. A child could give you the solution there: put the homeless people in the empty houses. That’s what we do, no matter it’s Biden or Trump in office. No one is coming to save us but ourselves. Politicians of all stripes make laws to make it easier for the rich to steal from the poor, then blame the poor for being poor. They write laws to criminalize the poor but loopholes for their friends on Wall Street. They find deals and rehabilitation and pardons for their rich friends, but dope and death and detention for our neighborhoods. Vote for who you want to, but don’t pretend that it will save the planet or the poor.

AG: Are the poor and homeless populations you work with registered to vote?

CH: Most people I work with vote. Many people I know choose not to vote, or vote for third parties. They shouldn’t be demonized for understanding that they’ve been forgotten. Poor people are the ones corrupt politicians come running to before elections to buy our votes. If you live in my neighborhood you don’t have much faith in elections, and most of us would like to see election monitors come into our neighborhoods.

AG: Lastly, how has COVID-19 affected you and your community? The last time we spoke you were sick in the hospital, and the medical staff had given you the standard-of-care medical treatment for COVID, even though you’d tested negative, because all your symptoms indicated COVID.

CH: I was lucky to have advocates from across the country, and some very important friends who are doctors and nurses helping me. That’s not most people’s experience. People have been turned away from hospitals; more than 50% of people in the largest shelter tested positive for Covid. Homeless people need to be housed. Quality healthcare and ways to stay healthy needs to be accessible and available for everyone. Their solutions are to roll portable showers and hand-washing stations into the dirty streets. We say take people off the streets. We live in a land of plenty. The only problem we face is the organization and political will. Once we get those things in order, we can take back our country from the billionaires and corporations. While practicing mutual aid we can continue to help people find ways to be healthy, but at the end of the day, we only get what we are organized to take. So the Poor People’s Army is organizing, and we are getting ready to take back what belongs to the people. Join us.