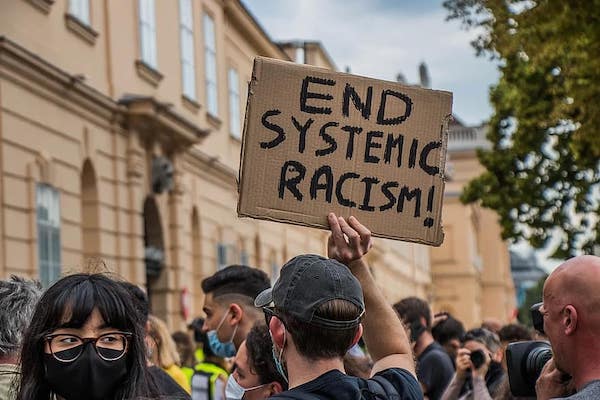 It’s true. Too often, in too many circumstances, for too long, the lives of Black people in the United States don’t matter. Black people fill prisons; their children fill terrible schools; many are poverty-stricken. But at issue here are the killings and people being left to die.

Post-Civil War arrangements by which the victorious North settled with the defeated slavocracy ensured that many Black people would not matter much and that some would die. A thousand or so were murdered in the South in 1866, reports W.E. B Du Bois. Over 2000 more would be lynched during the Reconstruction years, as documented recently by the Equal Justice Initiative.(1) That organization had already documented and memorialized thousands of lynching deaths occurring between 1877 and 1950.

The police killings of Black people prompted the formation of Black Lives Matter. But they die unnecessarily in others ways. Life expectancy is far shorter and infant mortality far greater for U.S. Blacks, for example, than for white people.

According to journalist Adam Serwer, writing in the Atlantic,

The lives of disproportionately black and brown workers are being sacrificed to fuel the engine of a faltering economy.” Specifically, “workers at the front lines of the [COVID-19] pandemic—such as meatpackers, transportation workers, and grocery clerks—have been deemed so worthless that legislators want to immunize their employers from liability.

Significantly, even white people viewed as worthless may be in trouble. Texas Lt. Governor Dan Patrick, commenting on the Covid 19 pandemic, told a reporter that “there are more important things than living. And that’s saving this country.” Representative Hollingsworth of Indiana identified Coronavirus deaths as “the lesser of these two evils,” the other being economic collapse.

That white people die because they don’t matter is revealing.  They too may be disposable—if they are unnecessary, in the way, or far off. The victims of Hiroshima, Nagasaki, and Dresden are remembered, as are indigenous peoples decimated by settlers and invaders, and civilians and combatants dying in U.S. wars. The political powers seem to be at ease presently with the probability that millions will be dying soon due to climate change.

Dan Glazebrook, writing for Counterpunch, is a witness. He asserts that, “one product has defined capitalism above all else: human waste.” Criticizing Britain’s management of the COVID-19 crisis, he notes that,

Superfluous people, not necessary for production, not able to participate in the market, and an ever-present threat to the stability of the system [are] the main output of the bourgeois epoch.…. [S]urplus Europeans were exiled…to the colonies…to continue the process of exterminating surplus non-Europeans.

Glazebrook cites urban theoretician and historian Mike Davis’s observation that up to 3 billion informal workers constitute “the fastest-growing and most novel social class on the planet.” But this “is not a labor reserve army in the nineteenth-century sense: a backlog of strikebreakers. [It’s] a mass of humanity structurally and biologically redundant to global accumulation and the corporate matrix.”

They’re minorities who are far and away a global majority. They’re people who feel the periphery inside them, who identify with the periphery, even if sometimes they’re located in the core. Residues are workers without regularity, workers without any real stake in the future of work…. A lot of these residues know that now work is contingent [and] life itself is contingent.

George Floyd’s life was contingent. The lives of U.S. Black people who don’t matter are residues.

Under capitalism, human beings are valued for their use. Enslaved, Black workers were useful, even essential. Then their agrarian society merged with the larger one embarked upon industrial production and territorial expansion. They acquired a distant master that, like the old one, measured the worth of workers with an economic yardstick.

Black agricultural workers, bereft of education, their ancestors stolen from Africa, didn’t fit the capitalist mold. European immigrants ready to work in factories or to occupy land being opened up by the railroads amply fulfilled capitalist objectives.  From Reconstruction on, Black people were marginalized in a country where social needs are neglected and public attention distracted. Violent thugs threatening them have had free rein.

Du Bois in his Black Reconstruction in America (1935) offers an explanation for how the failure of Reconstruction led to limited political rights for Black people and exclusion from real participation in the larger society. Initially,

the reconstructed states were in the power of the rebels and…they were using their power to put the Negro back into slavery.” But the North “united its force with that of the workers to uproot the still vast economic power of the planters. It hoped…to induce the planter to surrender his economic power peacefully, in return for complete political amnesty.

The northern business class was insecure: “the Republican party which represented it was a minority party.” But “united with abolition-democracy [with its] tremendous moral power and popularity,” the party hoped to “buttress the threatened fortress of the new industry.” Giving Blacks the vote “would save the day.” The Republicans sought to nullify apportionment based on non-voting slaves, as provided for in the Constitution. Southerners had relied on that device to inflate their representation in Washington.

But poor whites in the South regarded Blacks as wage competitors. Landowners proceeded to “draw the color line and convince the native-born white voter that his interests were with the planter class.” Poor whites “thought of emancipation as giving them a better chance to become rich planters, landowners, and employers of Negro labor.” They wanted “to check the demands of the Negroes by any means” and were willing “to do the dirty work of the revolution that was coming, with its blood and crass cruelties.”

In the North, “Abolitionists failed to see that…the nation did not want Negroes to have civil rights and that national industry could get its way easier by alliance with Southern landholders than by sustaining Southern workers.” And so, “labor control passed into the hands of white southerners, who combined with white labor to oust northern capitalists” and themselves manage a southern-style capitalist economy.

What resulted remained for decades. Wages for Black people, initially non-existent or very low, stayed depressed. Aspiring Black landowners met resistance, eventually at the hands even of New Dea l officials. Because the methods of exploitation available to southern overlords, sharecropping and the convict-leasing system, were less profitable than those available to northern capitalists, the material value of southern Blacks stayed low.

Most Black people were barred from occupying a sustainable niche in the productive apparatus of the U.S. economy. They’ve verged on the irrelevant, remaining as a “residue,” at risk of being disposed of.

Nevertheless, the U.S. political system has been open enough to allow many Black people to find remunerative work, elevate their social-class status, and be safe. Even Black workers defied expectations: in 1950, 43% of Black men in Michigan were working in the auto industry.(2)

The argument here has centered on social-class difference. But racism, which operates as a means for imposing differentiation among humans, also had a part. The notion of racism elaborated by political scientist Adolph Reed Jr. is relevant. Reed explains that racism showed up historically as a tool devised by oppressors for dealing with social conflict. He claims that white settlers and other exploiters configured differences among humans—physical, cultural, and religious plus others fashioned out of upper-class snobbery—into an all-embracing concept of race. They thus gained the ability to weaponize inequalities within human society, the better to enforce oppression.

One example: southern elites, from Reconstruction on, arranged for Blacks and the white underclass to be at each other’s throats. Their northern counterparts did likewise, leaving it so that Blacks and whites don’t easily unite in common struggle.

Racism serves as an adjunct to classed-based oppression. Causing pain, it works for maintaining social-class boundaries. The combination of the two has resulted in Black people being left with a generally precarious role within U.S. society and with vulnerability to lethal violence.

Some basic ideas, no less true for being platitudinous, may suffice to conclude this effort. One, an injury to one is an injury to all. Two, ruling class prerogatives and oppression travel in the same lane. Three, dedication to equality, radical or otherwise, does matter.

Anti-colonialist intellectual and activist Franz Fanon has the last word: “For my part, the deeper I enter into the cultures and the political circles the surer I am that the great danger that threatens Africa is the absence of ideology.” You need to replace “Africa” with “USA.”