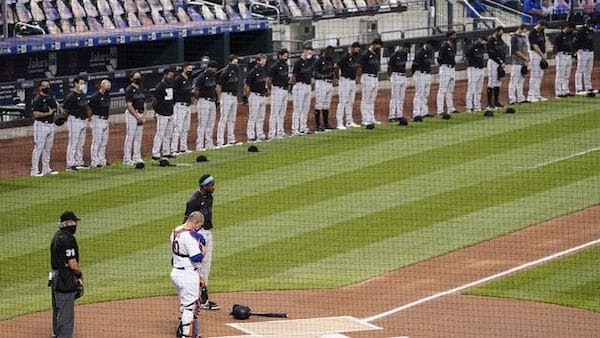 The New York Mets and Miami Marlins stand on the field and bow their heads before a scheduled baseball game ,before walking off in protest, Thursday, Aug. 27, 2020, in New York. (AP Photo/John Minchillo)

The boycott by professional athletes of scheduled games and practices expanded on Thursday for the second day. The boycotts began yesterday with professional basketball players in protest against police violence and racism, in particular, the brutal shooting of Jacob Blake in Kenosha, Wisconsin on Sunday.

The unprecedented joint protest by athletes from major professional sports leagues in opposition to police violence is an expression of the significant growth of social opposition within American society more broadly. Their demands for a halt to the epidemic of police violence against poor and minority populations expressed by the athletes—of all ethnicities—reflects the broad sentiments of the public.

American sports, which have long played host to empty-headed patriotic rituals, often funded with tens of millions of dollars from the Pentagon, is now becoming an arena for political protest. The athletes, many of whom come from working class backgrounds, are all too familiar with the brutality meted out by the forces of the capitalist state against the public in cities and neighborhoods across the country.

While the sports leagues themselves are based in the US, all headquartered in New York City, and the teams are based in major cities in the U.S. and Canada, the players are increasingly international, coming from Latin America, Europe, Africa and Asia.

Scheduled NBA playoff games were postponed for a second day following a morning meeting of basketball players in Orlando that included a vote to resume the championship competition, which will likely take place on the weekend. According to ESPN, “a long meeting among players and coaches inside the NBA bubble at the Walt Disney World Resort was held Wednesday night, and then the players met again Thursday morning, leading to their decision, sources said.”

The NBA players sparked the athletes’ boycott when players for the Milwaukee Bucks refused to take the court for the fifth game of their first-round playoff series against the Orlando Magic. The four teams scheduled to play in games later Wednesday also joined the protest and refused to play. In all, six NBA playoff games have now been postponed.

ESPN also reported, “The exact date of when the playoffs will resume, and what will happen next, is expected to be announced after Thursday afternoon’s meeting, which also will include discussion of formulating the action plans to address racial injustice issues, sources told ESPN.”

NBA players, coaches and sportscasters continued to comment publicly about the boycott on Thursday and responded to the provocative statements of both President Donald Trump and White House aide and Trump son-in-law Jared Kushner denouncing the athletes’ protest against social injustice.

The president answered a reporter’s question about the boycott by saying, “I don’t know much about the NBA protest. I know their ratings have been very bad, ‘cause I think people are a little tired of the NBA, frankly… They’ve become like a political organization and that’s not a good thing.”

Kushner, during an interview on CNBC, said that the NBA players are “very fortunate that they have the financial position where they’re able to take a night off from work without having to have the consequences.”

The Washington Mystics of the WNBA boycotted their game against the Atlanta Dream on Wednesday night. Prior to the scheduled game start time, the Mystics took center court, each player wearing a white T-shirt with a letter of Jacob Blake’s name on the front and the image of seven bullet holes on the back. They lined up to spell his name and embraced each other before spelling his name while taking a knee.

The WNBA canceled the other two games scheduled for Wednesday and all three games on Thursday. Ariel Atkins, a guard for the Washington Mystics, told ESPN, “We wanted everybody to feel like they were supported. Understanding that this just isn’t about basketball. We aren’t just basketball players, and just because we are basketball players, that’s our only platform.”

The Oakland A’s-Texas Rangers baseball game was not played on Thursday evening after players on both teams agreed to join the boycott. This is the fourth MLB game to be postponed due to player protests.

In a joint statement, the Oakland A’s players wrote: “All too often we hear about the plight of our fellow man and fail to act. It is long past due that these communities are being heard, seen, understood, and supported. We will not take the field tonight to help raise awareness for these social issues, not just tonight, but for our collective future. This is the first step in our relentless pursuit for meaningful change.”

After a 42-second moment of silence to mark Jackie Robinson Day, which is named after the first black major leaguer and commemorates the racial integration of pro baseball, the New York Mets and Miami Marlins jointly walked off the field. Mets General Manager Brodie Van Wagenen said in a video that the Mets did not want to play and were speaking with the Marlins about coordinating a postponement.

Van Wagenen criticized Baseball Commissioner Rob Manfred’s handling of player protests this week and said the commissioner was pressuring the Mets to stage a symbolic walkout and then return to the field to play the game. The players refused to do it.

The NHL postponed Stanley Cup playoff games scheduled for Thursday and Friday after the league went ahead with hockey games the night before. The NHL was criticized by fans and the public for its refusal to cancel the games on Wednesday.

The decision to postpone the Stanley Cup competition was made jointly by the NHL and the NHL Players Association after a player group called the Hockey Diversity Alliance (HDA) issued a call on Thursday for the league to suspend the games.

San Jose Sharks winger Evander Kane, a co-founder of HDA, made the request public on Thursday afternoon, tweeting: “We have formally requested the [NHL] to suspend all playoff games today. We strongly feel this sends a clear message that human rights take priority over sports.”

In a tweet, Kane acknowledged that the vast majority of the NHL players forced the league and the players association to act. “The PLAYERS took a stand today, they stepped up. Proud of my fellow nhl PLAYERS for their action.”

Washington Head Coach Ron Rivera said, “In place of our practice at FedEx Field, the players, coaches and football staff will meet as a football family, and we will continue our open dialogue on the issues of racism and social injustice in our country.” He added that the plan was to return to the field on Friday, but Thursday will “be about reflection instead.”

In some cases, teams decided to go ahead with practice and organized other forms of protest regarding the Kenosha police shooting. The Baltimore Ravens released a statement that said, “Our team decided to practice this morning. After practice, the team will come together for a meeting to discuss and work on a plan for continued social justice reform efforts.”

The New Orleans Saints also decided to have practice, and players, including NFL star quarterback Drew Brees, put the name “Jacob Blake” on their helmets to show their support for the protests.