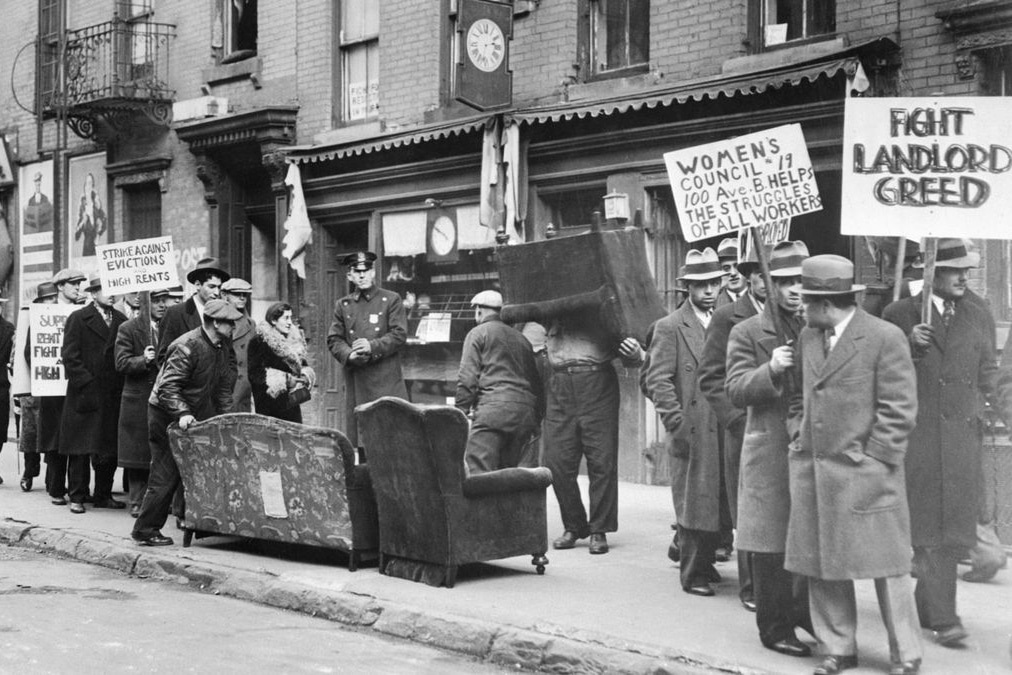 It is almost impossible to overstate the gravity of the housing crisis now facing our society. Due to the COVID-19 pandemic and its resultant mass layoffs, according to the Pulse Survey of the Census Bureau, 20 percent of U.S. tenants could not pay their rent in July. One in three U.S. renters do not know if they will be able to pay their landlord in August. Out of the 110 million Americans who pay rent for housing, by 2021, some 30 to 40 million will face eviction. Such mass homelessness would be an unprecedented social catastrophe with possible revolutionary consequences.

Do not be fooled by any “moratorium” on evictions possibly ordered by Donald Trump. Proving once again the lack of honor among thieves, the president is quite willing to temporarily sacrifice his oldest political allies and base—the real estate and construction magnates—for the sake of his possible reelection. But any moratorium is only a temporary putting-off of the reckoning. As one mega-landlord put it, eventually his tenants will have to pay him all their back rent, and then where will they get the money?

The workers will necessarily need to demand a cancellation of that debt and a permanent freeze on evictions in response. In 2008, during the last economic crisis, millions lost properties to foreclosure. Though low income, they were, at least to some extent, people with something to lose. In the 2021 crisis, in contrast, the renters thrown out on the street will have nothing to lose. The class question will be posed most starkly. One side, one class or the other, must win or lose.

Across the nation, the fight for housing security has already become a part of the general struggle against inequality made possible by the epochal rise of the Black Lives Matter movement. And that makes sense. Nationally, 80 percent of evictions are against people of color. The most frequent victim of housing displacement is a woman of color with children. In New York in 2018, for example, according to Census Bureau figures, the zip codes with the highest number of evictions—all in the Bronx or Brooklyn—were all minority neighborhoods.

As Brooklyn’s Crown Heights Tenants Association put it in a July 4 statement of solidarity with the Black Lives Matter movement, “the fights to Cancel Rent and Defund the Police [are] deeply interconnected.… If NYC [New York City] and NYS [New York State] elected officials do not cancel rent, it will be clear that they do not value Black lives, despite whatever posturings they may do.”

The severity of the sudden pandemic has forced the rulers to grant payment moratoriums in forty-three states. Yet there have already been signs of pushback. These are straws in the wind of the hurricane of resistance that is sure to come. Last Wednesday, for example, in Downtown Brooklyn, a direct action was carried out by Crown Heights Tenants Association activists. Assembling outside Eviction Court, disregarding New York Police Department cops and rent-a-cops, they marched into buildings containing two law firms representing landlords and then into the Brooklyn Borough Hall. They carried placards that spelled out their demands—“Cancel Rent” and “Shut Down Evictions”—and generated wide publicity for their message: “Brooklyn residents, join the struggle against greedy landlords and take the streets!”

In another instance in Crown Heights, on July 7 residents spontaneously intervened to prevent the illegal eviction of eleven queer women of color from a house they rented. The women are in their 30s and 20s, working service jobs. After losing employment due to the pandemic, the tenants decided collectively to go on rent strike. They did not pay their rent for May or June. Then, in the first week of July, without warning, the landlords arrived—a wealthy local white businessman and his ex-wife—with their three children, two dogs, and several maintenance men. Cursing the tenants and shouting for them to get out, the “owners” tossed the women’s mattresses and other belongings out on the street.

Fortunately, the shocked tenants resisted. They were able to contact Equality for Flatbush, a local grassroots group. (This organization, led by people of color, declares their goals to be the ending of police murders and the displacement of their community’s longtime residents.) Equality for Flatbush supporters quickly organized a protest online. Soon, about one hundred activists were on the scene, surrounding the house and chanting “Go home!” at the invading property owners. The landlord and his entourage left.

Later, a group of locksmiths arrived, saying that the owner had sent them. They attempted to change the locks, but were prevented from doing so by the protesters, who stood with locked arms to protect the premises. Thanks to the tenants’ and activists’ ability to make use of social media, wide—and sympathetic—media coverage resulted from the spontaneous direct action.

In Ralph Ellison’s great novel Invisible Man, his never-named protagonist, newly arrived in 1930s Harlem, took part in anon-spontaneous rent resistance action. He joined a crowd returning an old woman’s furniture that had been put out on the street. He narrated: “We rushed into the little apartment…and put the pieces down and returned for more. Men, women and children seized articles and dashed inside shouting, laughing.”

Suddenly, he was surprised to see a white man helping them and, out on the street, several more whites, women and men, were “cheering whenever another piece of furniture was returned.” The shocked Invisible Man asked, “‘Who are those people?’… ‘You mean those ofays?’… ‘We’re friends of the people,’ one of the white men called.… They all joined the crowd and started lugging the evicted articles back inside.”

Of course, the mysterious “ofays” were members of “the Brotherhood,” Ellison’s Cold War code name for the Communist Party USA. Communists were often participants or leaders of such neighborhood protests. So identified was the Party with eviction resistance that, according to Fraser M. Ottanelli’s The Communist Party of the United States, one resident, upon receiving her eviction notice, immediately told her children: “Run quick and find the Reds!”

To help families threatened with cutoffs from utilities, Communists organized “electric squads” or “gas squads” to turn the power and heat back on. Unemployed Council members became experts in reconnecting cut off electric or gas lines—”meter jumps.”

In the early 1930s, the fight against mass evictions was not separate from struggles against widespread hunger and mass unemployment. Though not shadowed as we are today by the fear of epidemic disease, the crisis of the Great Depression was worse than ours in certain respects: the unemployment payment was not $600 or $400 a week, but $0 a week. Such basics of the social safety net as social security pensions, a federal minimum wage, or a system of unemployment insurance were radical goals yet to be won.

On March 6, 1930, more than a million U.S. workers took part in an International Unemployment Day. Organized by the Communist Party under the dramatic slogan “Fight! Don’t Starve!,” demonstrators in cities across the nation demanded immediate federal payments for the unemployed or home relief.

In response to the 1930s economic crisis, the Communists’ strategy was to recruit the refuse of capitalist society, the reserve army of the unemployed, nationwide, into Unemployed Councils. In Chicago alone, for example, the group had forty-five local branches with more than twenty thousand members. In Chicago on July 4, 1930, 1,320 delegates assembled to form the first National Unemployed Council. The Reds built their movement on the breadlines and soup kitchens, in the flop houses and the crowds outside factory gates—these “insulted and injured” were the people they sought to recruit. The Communist organizers believed that the army of workers needed to liberate their class must be recruited from among the workers themselves.

Ottanelli quotes the Communist Steve Nelson on how a typical Council was organized:

Some organizers had approached a group of workers they heard “complaining about the relief that they were receiving and the discrimination in handling the relief.” The workers help draw up a leaflet, distribute it and organize a first meeting. The next step was to circulate a petition…listing their demands. Soon, an Unemployment Council was formed.

The degree of resistance achieved by this strategy was epitomized by one incident of a Depression-era housing struggle in New York remembered as the Battle of the Bronx. In January 1932, due to the economic crisis, a Bronx Unemployed Council voted to support a rent strike at several large apartment buildings. In those days, rent strikes and evictions were tied together. This was because prolandlord judges automatically approved notices of evictions to tenant strike leaders.

But when the New York Police Department and city marshals arrived at the first building to evict seventeen tenants, they were met by a furious crowd of more than four thousand local residents. When the cops started to move out the first of the furniture, the “mob” attacked them, pitting sticks and fists against the police clubs. They almost prevailed, until more police reinforcements arrived. At this point, the landlord gave in, promising a rent reduction and no more attempts to evict tenants. The Bronx Home News reported: “When news of the settlement reached the crowd, they promptly began chanting the Internationale, and waving their copies of the Daily Worker.” By later that year, there were Communist-organized rent strikes carried out in poor neighborhoods across New York. In the Bronx alone, there were more than two hundred buildings out on strike. As Mark Naison, professor of history at Fordham University in the Bronx, has written,

Using their networks…in fraternal organizations, women’s clubs and left-wing trade unions, aided by younger comrades from the high schools and colleges, Communists were able to mobilize formidable support for buildings that were out on strike, and to force police to empty the station houses to carry out evictions.

These interventions were both numerous and effective. Between November 1931 and June 1932, New York had some 186,000 evictions. But many were unevicted by popular force. According to Richard Boyer and Herbert Morais in Labor’s Untold Story, “77,000 of these families were moved back into their premises by the people of the Unemployed Council.”

What did the 1930s resistance movement have that we lack today? Mainly, two factors. First, they possessed a unifying, scientific, revolutionary ideology: Marxist-Leninism. And, second, they maintained a strong, stable organization with principled, working-class leadership.

But the 2020 movement is young and will learn from experience. Like the mythological giant Antaeus who drew his strength from the earth, the eviction resistance movement will grow strong to the extent that it bases itself on the overwhelming majority of the common people, the multiracial, multinational, multigender working class.

Michael R. McBrearty is a disabled worker living in Manhattan. He has earned an M.F.A. from Columbia University. He is currently working on a cultural history of the 'lost world' of the American Communist movement of the 1930s and 1940s. He can be reached at redallover49 [at] gmail.com.