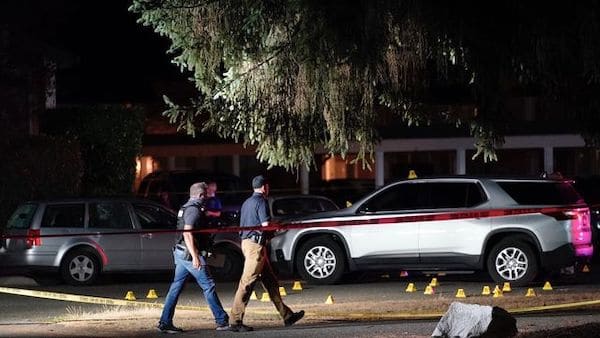 An eyewitness has come forward to contradict official claims that Michael Reinoehl, a left-wing opponent of police violence who was killed in Lacey, Washington on September 3, died in a shootout with police. According to the witness, an ordained minister who lives nearby, police opened fire without warning and Reinoehl did not appear to be armed.

Reinoehl had fled from Portland, Oregon to the suburb of Olympia, Washington, about 120 miles north, after a warrant was issued for his arrest in the fatal shooting of an armed fascist, Aaron Danielson, during a right-wing attack on antipolice violence protesters. Reinoehl had claimed self-defense, saying he was acting as a defense guard for the protests that have taken place in Portland over the past three months.

In interviews with press contacts, Reinoehl said he was fleeing because he feared being murdered by the police because of his political views, a fear that was fully justified as events have since demonstrated. He became the victim of what can only be called a targeted assassination, whose instigator resides in the White House.

The official account is that when police accosted Reinoehl in the parking lot of an apartment building, he pulled a gun and exchanged fire with them. The officers who fired their weapons were from the Pierce County (Tacoma) Sheriff’s Office, the Lakewood, Washington Police Department, and the Washington Department of Corrections (the prison system), operating as part of a federal/state task force.

But eyewitness Nathaniel Dingess, a 39-year-old ordained minister who lives in the apartment complex, said police gave Reinoehl no warning or command before they opened fire and shot him dead. According to a statement issued by Luke Laughlin, his attorney, Dingess saw Reinoehl walk towards his car holding a cell phone in his hand and eating a piece of candy, when two unmarked police cars converged, blocking the exit from the parking lot.

“Officers shot multiple rapid-fire rounds at Reinoehl before issuing a brief ‘stop’ command, quickly followed by more rapid-fire shooting by additional officers,” the statement from Dingess reads. The witness said he did not see Reinoehl with a handgun or reaching for one. Police claimed to have recovered a gun in Reinoehl’s possession but have not said if it had been discharged.

This account was first published Wednesday in the local media in Portland, Oregon, but by Thursday it was being prominently reported on the website of the Washington Post, the leading newspaper in the U.S. capital, under the headline,

This was accompanied by an extraordinary 18-minute video presentation on the newspaper’s website that profiled the experiences of four protesters arrested in Portland by heavily armed agents dressed in camouflage and unidentified except for the word “police.” The four were held for periods of up to 12 hours and interrogated, then released without charges.

The Post headline—“Swept up in the federal response to Portland protests: ‘I didn’t know if I was going to be seen again’”—captures the terror inflicted on those arrested by federal agents using methods reminiscent of Latin American death squads.

All four were from the Portland area, not “outside agitators,” and all four were active in the protest movement against police violence but unaffiliated with any left-wing organization, let alone the supposed Antifa, which is more of a label adopted by antifascist protesters than an actual group.

Evelyn Bassi, 30, a lifelong city resident, is a bartender and chef. Mark Pettibone, 30, had recently completed a master’s degree at Reed College in Portland and works at a grocery store. Tawasi, 44, is a Native American who uses only one name, lives in Portland, and works as a delivery driver and video blogger for the protest movement. He is a pacifist. Police accused him of being a Canadian named Ronald Hickey and sought to bring charges against the Native American of illegally entering the country.

The fourth arrestee who discussed his experience with the Post was John Hacker, a 36-year-old recent graduate of Portland State University who works as a “citizen-journalist” documenting the Portland protests and the repressive measures of all levels of the state: Portland cops, Oregon state police and federal agents.

Bassi and Pettibone were grabbed by armed agents and put into unmarked vans as they walked on downtown streets late at night, while Tawasi and Hacker were likely targeted because they were engaged in documenting the role of the police for left-wing social media outlets.

After the Trump administration largely pulled federal agents out of Portland in August, it mobilized fascistic supporters, who staged several rallies in the Portland suburbs, then organized a series of caravans that drove into the city and carried out violent attacks on those protesting police violence. In some cases, they fired paint balls, pepper spray and other noxious irritants, and displayed firearms.

It was in the course of one such confrontation, on August 29, that Aaron Danielson, who was firing paint balls and pepper spray at protesters and carrying a handgun, was shot and killed.

One aspect of the killing of Michael Reinoehl—that he was carrying his cell phone when shot down—has particular significance from the standpoint of security. OregonLive.com reported that the U.S. Marshals Pacific Northwest Violent Offenders Task Force obtained “pen register” and “trap and trace” warrants from a Portland-area judge.

As the WSWS wrote Thursday, “The court-approved warrants permitted the task force to track the GPS location and cell phone call data from Reinoehl’s cell phone and pinpoint his precise location.” One hour and 14 minutes after the judge approved the warrant, the police apparently followed the cell phone signal to Reinoehl’s location and shot him dead.

The moral author of Reinoehl’s execution-style slaying by police is President Trump. For months he has held up Portland as the prime target for his law-and-order and anticommunist demagogy. He dispatched hundreds of federal agents to the city, including the notorious BORTAC unit of Customs and Border Protection, a SWAT-style unit that has operated all over the world against so-called terrorists.

In the past two weeks, Trump has defended the right-wing vigilante Kyle Rittenhouse, who gunned down two unarmed protesters against police violence in Kenosha, Wisconsin, then hailed the killing of Reinoehl, calling it “retribution.” Attorney General William Barr called the killing of Reinoehl “a significant accomplishment in the ongoing effort to restore law and order to Portland and other cities.”

The Trump administration and the police are seeking to create a political atmosphere that justifies in advance whatever violence is carried out by the fascist right against left-wing protesters and the working class as a whole.

They are assisted in this by their Democratic Party opponents, Joe Biden and Kamala Harris, who have remained silent on both the execution of Reinoehl by the police and the gunning down of the two protesters in Kenosha by Rittenhouse. The Democrats have sought to present themselves as more competent and serious advocates of “law and order” and police repression than Trump.

Nathaniel Dingess, the eyewitness who has bravely come forward to expose the police lies about the killing of Reinoehl, expressed fear for himself and his family as a consequence of his testimony. His attorney, Luke Laughlin, and other civil liberties lawyers have called for an independent investigation into the shooting of Reinoehl, rather than that conducted by the Thurston County Sheriff’s Office, which has jurisdiction because the killing took place in Thurston County, Washington.

In a statement to the press, Laughlin said,

Given the political sentiment of the deceased, and the national climate regarding police shootings, the investigation ought to be handled by an outside organization without ties to law enforcement, if it can really be considered fair and neutral.

At a time when public outcry over police killings is at its peak in this country, it is imperative that the circumstances of Reinoehl’s death not be swept aside.