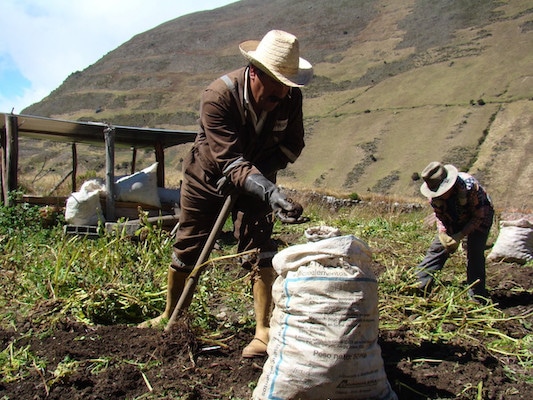 Researchers, academics and Andean families are working on strategies to recampesinize food choices. Photo: Ministry of People’s Power for Science and Technology

“…on the agricultural issue, which is of high national interest, we have been fighting a hard battle since the very beginning of the Revolution”.

– Hugo Chavez. Presentation of Memory and Account before the Venezuelan National Assembly (2012)

The Great AgroVenezuela Mission was born on January 25, 2011 under the leadership of President Hugo Chávez, and was launched from the Agricultural Social Property Unit “La Productora” in the municipality of Ospino in the state of Portuguesa, with the aim of promoting food security and sovereignty in the country.

Since its creation, this Great Mission became a highly mobilizing call, “a new impulse, (…) a re-impulse, the three R’s squared” of the Bolivarian Revolution, and which began with the “registration of all Venezuelan women and men capable of producing food”, which among other things, deployed 347 “tricolor points” throughout the national territory.

In the celebration of its first year, it registered 682,125 people (586,789 agro-Venezuelans registered in the first phase–May, June, July, August 2011–and 95,336 in the second phase–September, October, November and December 2011). Of these, 4,028 became delegates, and of these, 1,007 were principals, elected in 1,030 assemblies, which were held when the President announced the beginning of the second year of the Great Agro-Venezuelan Mission, at the beginning of 2012, affirming that, “we are committed to raising agricultural production, livestock production, agricultural production (…) the cornerstone of the new model of development, the productive economy, the socialist economy”, in order to make a “qualitative and quantitative leap in agricultural production”, for which it created the Superior Body, which would allow greater coordination among all state entities for its conceptualization, objectives and goals.

Earlier, on January 13, 2012, during the Memory and Account before the National Assembly, President Hugo Chavez commented:

On the agricultural issue, which is of high national interest, we have been fighting a hard battle since the very beginning of the Revolution, (…) this effort and these modest achievements, we have to use them as a basis to ask for a national effort and for us to make more efforts every day, to work more efficiently to continue building, but in a more vigorous way, national production.

Regarding the modest achievements, he announced that of the 47 agricultural sectors, 39 had grown in area and production compared to 2010:

Among other results, the urban agriculture program was born, with the initial name of AgroCiudad, which gave way to what is now the Ministry of People’s Power for Urban Agriculture.

From this space (Food and Power) we have consequently proposed that in Venezuela the agri-food system should be considered highly strategic, and we welcome the proposed constitutionalization of the Great Agro-Venezuelan Mission, but what does highly strategic mean in concrete terms?

In 2012, President Chávez provided light on what he, as Head of State, understood:

The strategic objective is to ensure a vital interest for the nation, which for Venezuela means “achieving food sovereignty to guarantee the sacred right to food for the people,” as described in the Plan de la Patria 2019-2025, within the first Great Historical Objective, National Independence.

Therefore, to safeguard that the country advances towards its objectives, annulling or reducing the negative consequences, derived from the existence of opposing wills (the fall of oil prices, or of oil production, but particularly from the blockade and the unilateral coercive measures, imposed by the U.S. and its allies), with necessary actions to channel the development and constitution of national power, which for the Bolivarian Revolution would be the alternative model of socialist development, that guarantees its population a good life.

Considering that, from 2014 onwards, when the open conflict with the United States was unmasked, and which has been escalating at different levels since it began, it became necessary to incorporate strong and permanent measures related to the national agrifood system, focusing all the potential during times of peace (to the extent that this situation of siege, of unconventional war, can be called peace), to make concrete a national policy to anticipate or confront times of crisis, even war, which before this year, would not have been considered by society as something that could really happen in Venezuela.

Here I am referring to the blockade against the nation, with the constant threat of military intervention by the first world power, and in which food also becomes a vital national interest, because the very existence of the population depends on its preservation, and the population is the most important power factor to be protected within a nation.

Thus, the Plan of the Nation is constituted in the general planning, and the Great Agro-Venezuelan Mission in the form of execution to achieve the National Objective 1.4. It is here where all the forces must coordinate in this defense policy to solve an element of strategic importance, the vulnerability of the Bolivarian Revolution to feed itself or, and at least, sufficiently, all its population. Although extensive efforts were made in this direction from 2000 to 2014, some sectors deny there have been improvements in the indicators of food for the population and national production to historical levels during this period. The concrete reality is that this was accomplished under a completely different scenario than the current one, with an evident break in the year 2014 with the precipitous fall in oil prices, although some analysts do not take this into account.

The objective: the preservation of the population

With President Nicolas Maduro’s announcement of the re-launch of the Great Agro-Venezuelan Mission and the implementation of a process that pays tribute to the collective construction for its re-impulse, we consider from this space that it is necessary to incorporate the whole agro-alimentary system.

To explain it more clearly, to “all the factors or tangible and intangible components, which involve the people and the government, as well as the public and the private”, or paraphrasing Chávez, the communal or direct, the state or indirect, or the mixed, which is State–Private, but also, State–Communal Power, in favor of the constitution of national power, whose ultimate purpose is to strengthen the national production of food.

Its objective is to preserve our population base, especially those that are suffering daily from food shortages, in the midst of the blockade and the COVID-19 pandemic.

The blockade and the unilateral coercive measures made it difficult to obtain the amount of fertilizer required for planting, and have been an instrument for the dispossession of Venezuelan crops, as well as for the decrease in production; the greatest damage being inflicted on the Venezuelan population, who are being starved to death, while causing a greater period of suffering, in terms of months or years, as a way of achieving the change of government promoted by the U.S.

And the fact is that, at present, the food shortage reaches 31.4% of the Venezuelan population, whose increase has been proportional to the number of unilateral coercive measures or actions that the U.S. and its allies are carrying out with the blockade on the nation, its assets, goods, resources, its people, in order to achieve its objective, and where the food has become a weapon of war.

Thus, it is stated that there is no point in increasing national production as a merely economic impulse if the transversal objective is not primarily to feed the entire Venezuelan population, which would translate into diminishing vulnerability and gaining greater freedom of action, hand in hand with the development of the productive forces, which would diminish the constant attacks on the nation from abroad.

On the one hand, in order to “kill the population with hunger”, which would detonate an outburst against the National Government, and on the other hand, to constantly denounce the Bolivarian Revolution at the international level as being solely responsible for the increase in food insufficiency, while access to world trade for the acquisition of food, supplies or raw materials is prevented by the blockade or other conditions.

Argentina, which “produces food for 400 million people”, has been called the “breadbasket of the world”, and recently the “supermarket of the world”, while its population suffers from limited access to food due to lack of economic or other resources, which has increased in recent years, currently affecting 35.8% of the population, or approximately 15.8 million people who suffer from moderate and severe food insecurity, with 11 million people eating in soup kitchens and cafeterias in these times of pandemic; 3.5 million of them are children; without sanctions, without blockade, without siege; but with an agri-food system, mostly controlled by the big food and agribusiness transnationals of the world, for which food is only a commodity and only those who can pay for it have access, a system that cannot and must not allow the viability of building a new model of production within Bolivarian Socialism.

In summary, since the agrifood system is a component of national power, because it is through this that agrifood self-sufficiency is achieved, which for the Bolivarian Revolution is food sovereignty, increasing food production means expanding availability, but it also requires policies for timely and permanent access by the population, especially those who are immediately affected by food insufficiency, and for this it is necessary to take firm steps with the Great Agro-Venezuelan Mission, which ruptures the status quo of the configuration in relation to dependence from a peripheral position subordinated to the Venezuelan agro-food system to the world, to the transnational, and of a highly oligopolized condition, avoiding, among other things, the cycle of privatization, denationalization, oligopolization and transnationalization, in which even the exploitation of arable land can fall.

Therefore, the rational use of natural resources (land, water, oil, gas and biodiversity) should be taken into account, conscious of the scenario that exists, of international competition for these, where Venezuela is an attractive source for large corporations.

And in relation to other factors already considered, such as science and technology, it is profoundly necessary, in all circuits and levels, not only in the field of genetics: also, for example, in innovation, for plants and spare parts, agricultural machinery and implements, national food formulas, or fertilizers, through ancestral recognition and popular knowledge, without leaving aside the geographic, territorial, military, and the primordial element, the population, which in geopolitics has strategic importance.

Because it is this element, in quantity and quality, in addition, with its character and the elevation of morals or its remoralization that will increase its human capacities to continue fighting, living and reproducing for work, the development of intelligence and reaching higher levels of education that meet the scientific-technological demands that will lead to the achievement of the objectives of the Bolivarian Revolution, Bolivarian Socialism, National Independence, Agro-food Sovereignty, under a new alternative model of development.

Clara Sánchez is a researcher, an agronomist engineer and a Master in Strategy and Politics. She maintains the website Alimentos y Poder, where she publishes research and analysis articles about the food world and all the relationships that derive from it.

This article was originally published on September 11 in Alimentos y Poder.

11] (FAO, IFAD, UNICEF, WFP and WHO, 2020) The state food security and nutrition in the world. Retrieved on August 1, 2020, from TRANSFORMING FOOD SYSTEMS FOR AFFORDABLE HEALTHY DIETS: www.fao.org