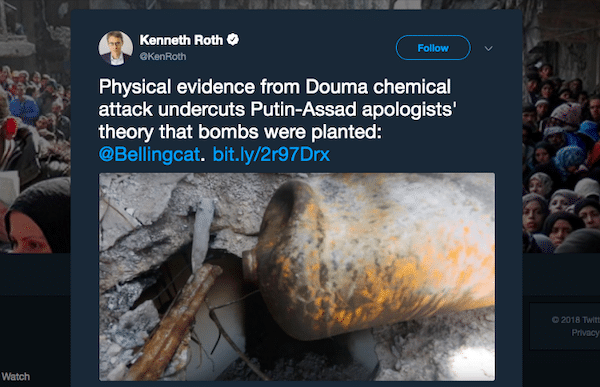 “In 2007, journalist James Bamford recalled how Americans had been subjected to ‘a long line of hyped and fraudulent stories that would eventually propel the U.S. into a war with Iraq–the first war based almost entirely on a covert propaganda campaign targeting the media.’ The dirty war on Syria represents an extension of that strategy, with the mainstream media operating hand in glove with insurgent-allied influence operations like the White Helmets to cultivate public support for another war of regime change.”
~ Max Blumenthal

In December of 2016, the war propaganda firm Bellingcat ran an article assuring its readers that Twitter star Bana Alabed is a perfectly legitimate little Syrian girl and not at all a psyop designed to manufacture support for military interventionism against Bashar al-Assad. In April of 2017, CNN’s “New Day” staged a fake, scripted interview featuring the child condemning Assad and pleading for the world to intervene in Syria. CNN passed it off to its unsuspecting audience as a real interview, and later used the footage against congressman Thomas Massie for his opposition to Syrian interventionism.

Bellingcat churns out such tripe constantly, and there’s a new article published yesterday that has all the usual warmongers salivating with particular enthusiasm.

“Want to know why Assad apologists hate @bellingcat? This is why,” Orr added.

So what is this brilliant, damning evidence Higgins compiled which is sure to have “Putin-Assad apologists” all over the world cursing the sky with raised fists and slithering back under the rocks from whence they came?

Well, there’s not actually much there. Higgins makes a complex and needlessly verbose argument that there are similarities between the alleged chlorine gas attack in Douma on April 7th and alleged chemical weapons attacks the Assad government is accused of perpetrating at earlier dates, using copious amounts of White Helmets footage as always. He examines the two chlorine gas cylinders allegedly dropped by the Syrian air force, mostly ignoring one because it somehow fell out of the sky and through the roof unharmed and harmless.

Higgins spends much of the article talking about the second cylinder, the one which is supposed to have killed dozens of Syrian civilians, and it’s here that the plot holes really start glaring.

First of all, there’s the obvious fact that the cylinder has been posed for photographing, a point Higgins doesn’t see any need to address for some strange mysterious reason. In the photo Higgins uses for his article, very obvious dents in the surface of the cylinder are visible, a point Higgins is sure to emphasize so that we can all be sure it was dropped from a great height by the Syrian air force. This is also the posed cylinder Higgins had posted on Twitter shortly after the alleged attack but subsequently deleted.

#Douma #DoumaMassacre #DoumaProvocation
The tweet deleted by Eliot Higgins proves some serious manipulation of the chlorine cylinder. Probably this is the reason why he deleted it. Compare the deleted version to the later White Helmet version. pic.twitter.com/4JcyzIlFtm 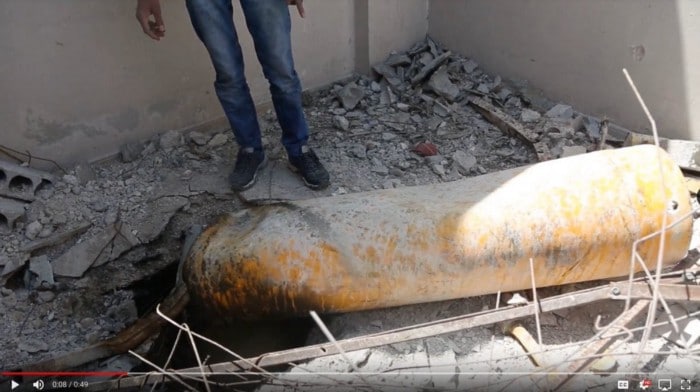 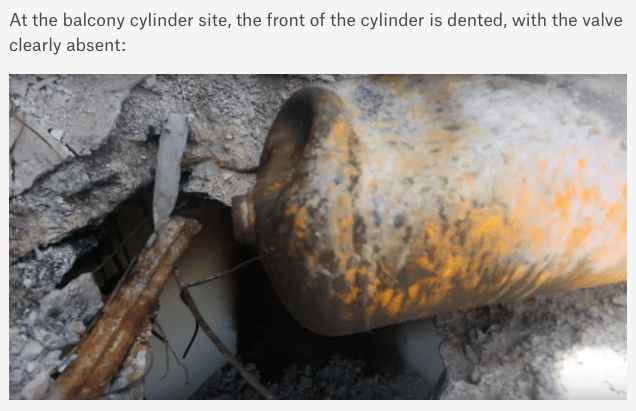 Here’s the same photo with a straight line drawn along the side of the cylinder so you can see how its side is dented as well, not just the end: 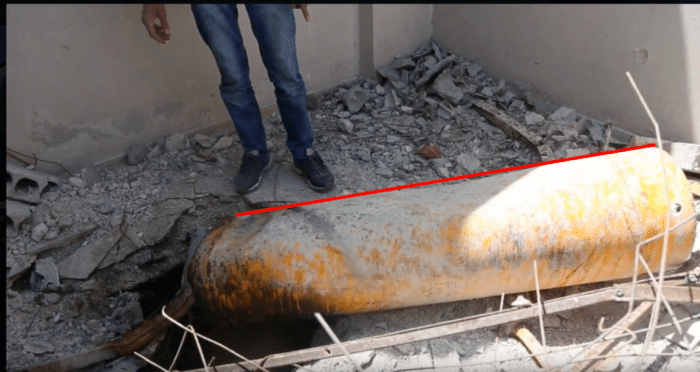 With me so far? Now let’s check out this other footage from Eliot’s friends, the White Helmets: 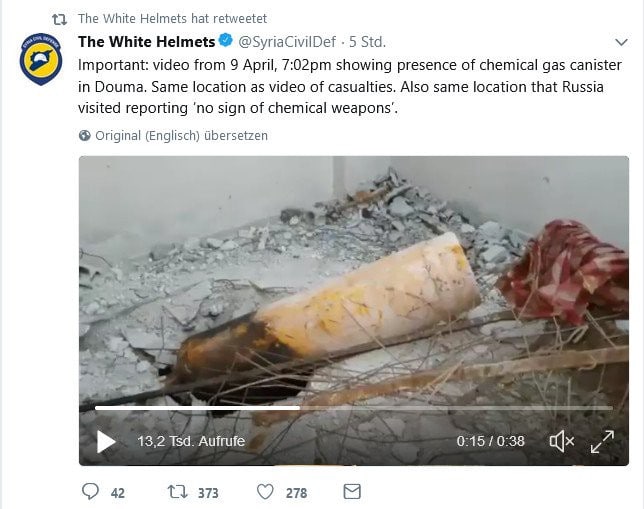 Let’s blow that up a bit: 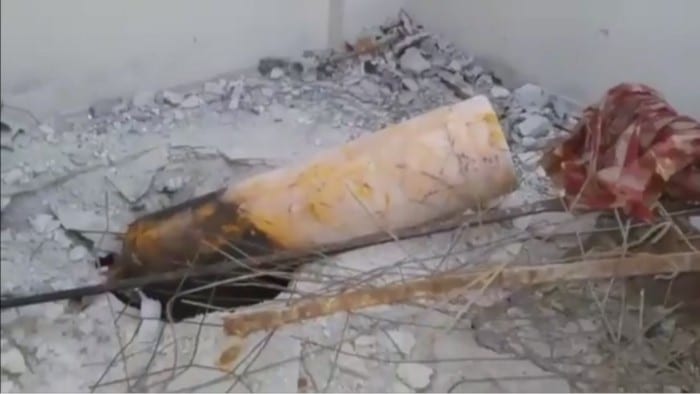 And let’s draw a straight red line, just like we did last time: 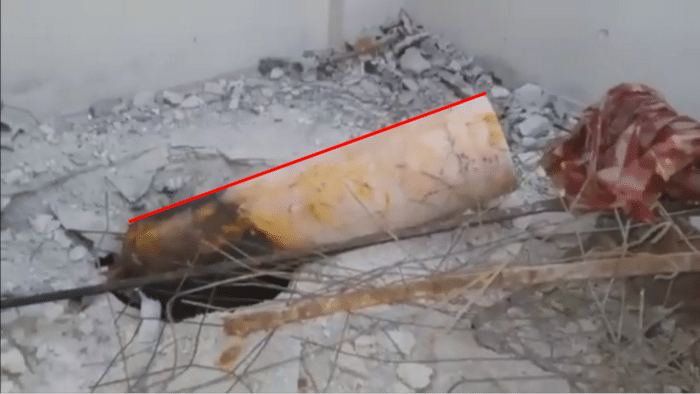 They also appear to be at slightly different angles, with Higgins’ preferred pose being perhaps a tad more horizontal, and the metal underneath the nose doesn’t look the same. Here they are again together, you can make up your own mind:

This of course kills the argument that the cylinder wasn’t posed over the hole in the roof for propaganda purposes. We know people were moving and posing it for photos, so there’s no reason to believe it wasn’t brought to the site and placed there by the Al Qaeda-linked Jaysh Al-Islam fighters and/or White Helmets in order to provoke an attack from the west, granting Assad’s enemies a temporary makeshift air force.

More devastating to Higgins’ case is one that was actually made in the comments section of the article by username Sean Lamb, who among other solid arguments wrote the following:

The whole idea that a cylinder dropped from a thousand meters would neatly knock out a hole in the ceiling and then after ricochet would come back to have its valve neatly pointing down into the same hole is a ridiculous fable only suitable for Bellingcat.

Boom. Higgins is trying to claim that, rather than being placed there by violent jihadists who would have had every incentive to do so, what actually happened was that the cylinder was dropped from an aircraft high in the sky, punched a hole in the roof of a building, snapped off its valve releasing the gas, and then either (A) ricocheted off the impact site only to land perfectly like an open wine bottle at the hole it had just created, or (B) somehow didn’t bounce at all and landed just right like a 1,000-meter version of the “water bottle flip challenge”.

This is clearly nuts. Even if the Syrian air force is gassing civilians willy nilly at the most strategically inopportune moment possible, they’re not going to be basing their military strategy on one-in-a-million novelty trick shots. A large metal cylinder falling from the sky with enough force to break a round hole in a concrete roof is either going to fall through or bounce away; it’s not going to punch a hole through the roof and just splat there like a dog turd. That’s not how matter works, Eliot.

But Eliot knows this. He’s a clever boy. He sees the plot holes in the stories he’s pushing and he keeps them quiet, just like he kept quiet about Syrian rebels having chemical weapons. It isn’t Eliot’s job to inform the public. It is Eliot’s job to deceive the public to advance interventionist NATO agendas.

Higgins is a nonresident senior fellow at the Atlantic Council, an extremely shady think tank with ties to powerful oligarchs. Its name seems to come up whenever you investigate any of the mainstream media’s favorite Russia conspiracy theories, from the DNC hack to Russian trolls to the PropOrNot blacklist publicized by the Washington Post which normalized the smearing of alternative media outlets as Kremlin propaganda. It’s a very influential organization with a very clear agenda, and it is Higgins’ job to advance that agenda.

We are being lied to about Syria to manufacture support for a regime change agenda which has been planned since long before the outbreak of violence in 2011. The U.S. and its allies have been arming and funding known terrorist factions like ISIS and Al Qaeda in Syria for years, the revelation of which really should have ended the debate about interventionism on the spot. The only reason the world isn’t screaming for the heads of the evil western officials who inflicted these horrors upon Syria is because of people like Eliot Higgins, who make their living feeding a false narrative into the minds of a trusting populace.

People are waking up though, Eliot. You can’t keep this up forever.