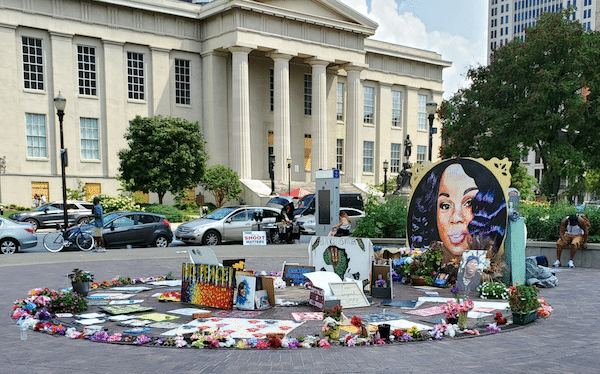 Breonna Taylor was murdered by Louisville, KY, police while asleep in her home in March of this year. Today, the three officers responsible for her death–Jonathan Mattingly, Brett Hankison, and Myles Cosgrove–were not held responsible for her death. A grand jury indicted only one former officer, Brett Hankison, with three counts of wanton endangerment. The other two former officers were not indicted at all. No one was charged directly for Taylor’s death.

For blindly firing shots, with no substantial evidence for having “raided” in the first place, officers Mattingly and Cosgrove enjoyed the benefits of paid administrative leave, and Hankinson was fired. Taylor’s family recently received a settlement of $12 million, such a concession fails to challenge the power structure that enables police officers nationwide to continue to inflict fatal violence onto poor and working people.

The Kentucky Attorney General insists they located a witness stating the officers did knock and announce themselves. This sits poorly against the backdrop of the other public evidence. The incident report was a farce. It was so poorly filled out that some information is wrong–like the victim’s injuries are indicated as “none.” Her boyfriend Keith Walker isn’t mentioned in the report despite the fact that he defended himself and was then detained while in the hospital for doing so.

In fact, three Louisville officers barged into Taylor’s apartment while she was sleeping. The officers murdered Taylor, a Black woman and essential worker. Now they are trying to justify extreme force and avoid being held accountable. Sgt. Jonathan Mattingly–one of the officers involved in the police killing of BreonnaTaylor–said “I know we did the legal, moral and ethical thing that night.”

Protests across the country have demanded justice for Breonna Taylor, and other victims of racist police brutality. In an email to around 1,000 officers, Mattingly called protesters “thugs” and said “it is good versus evil.”

The only reason the grand jury has even brought this meek indictment is the strength of the movement that erupted after the murder of George Floyd and the work on the ground in Louisville of the movement against racist police brutality.

In anticipation of continued protests after what they knew would be an insufficient indictment, the state declared a state of emergency and imposed a curfew starting Wednesday. In this society, the police murder of a Black woman requires no real response yet the righteous anger of thousands resisting racist police brutality is cause for a state of emergency.

Breonna Taylor should still be here today, and she would be if the police weren’t assured by the system in a million different ways that they will get away with wanton murder and racist, sexist violence.

As we know, Taylor is not the only woman murdered by police. Geraldine Townsend. Hannah Williams. DeCynthia Clements. India Kager. These are just a few of the names of the near 250 women who have been murdered by police since 2015. Many of these names have yet to even breach the surface of mainstream news coverage, despite having been just as brutally and unjustly murdered by the state.

Of the, on average, 1,000 people murdered by police yearly since 2015, about 44–or 4.4 percent–have been women. The gendered gap may be explained, in part, by the broader patterns that exist within the criminal justice system regarding gendered stereotypes; women tend to be viewed as less of a “threat” to police than men. Because women account for a much smaller subset of the population, such murders are often left out of the conversation of policing, or are dismissed as “collateral damage” in instances including other police pursuits. However, the social and economic conditions that result in women’s fatal encounters with police point to some of the same overall trends among policing at large–particularly in regards to race, class and disability.

The chance of police using force on women rapidly increases if they are perceived as not conforming to the stereotype of being submissive–especially if the woman is Black (and thus inherently “uncooperative”), LGBTQ, or mentally ill. Of the 247 women fatally shot by police since 2015, Black women have the highest rate compared to women of other races, accounting for 20 percent of all women’s deaths. An identical pattern of racial disparities is present in police stops, for both men and women; the year before Michael Brown was murdered, Black women in Ferguson were subject to traffic stops more than any other group of motorists. Mental crises also often end in police murder, particularly for women, who have higher rates of mental illness; nearly one-third of the 247 women murdered experienced mental health issues, compared to 22 percent of men.

Such was the case for DeCynthia Clements, a 34-year-old Black woman living with schizophrenia and bipolar disorder, who was shot and killed by Chicago police. Hannah Williams, a 17-year-old Afro-Latina with an established history of mental illness, also suffered the same fate at the hands of Fullerton, Calif., police while experiencing an episode. In both cases, police acted customarily with fatal bullets rather than necessary de-escalation tactics. Nationwide calls for police departments to be defunded, instead shifting the resources to social services and mental health programs, are most blatantly emboldened by such tragic cases. Despite the overly violent and often fatal handlings by police of case after case of interactions with civilians, rarely do the victims or their families receive justice.

The nationwide revolt against racism has forced the system to change–and substantially changed the consciousness of people across this country. This is the only force capable of keep up the pressure and demanding true accountability for Breonna Taylor’s tragic murder–the people themselves.