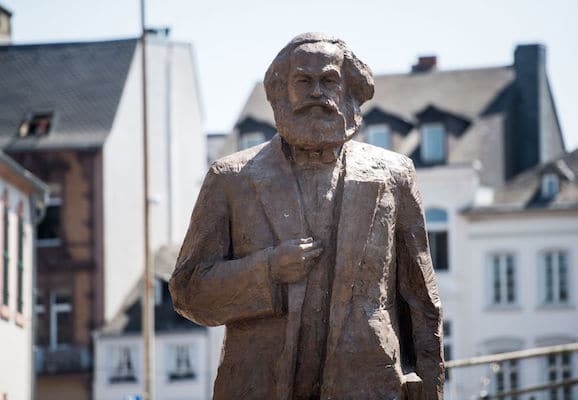 Links International Journal of Socialist Renewal — “The Roots of Karl Marx’s Anti-Colonialism“[1] by Thierry Drapeau in Jacobin examines the influence of the Chartist Leftist Ernest Jones on the development of Marx’s anti-colonialist thinking in the 1850s. Drapeau’s analysis is enlightening, but raises some questions.

Drapeau writes that the Communist Manifesto “considered Western imperialism as a progressive and beneficial force drawing underdeveloped societies into bourgeois civilization”. But the Manifesto made no such simple claim. Instead, it revealed the dynamism of the bourgeoisie taking root all over the world and remaking the world in its own image. It did not so simply express a naive view of imperialism (even if this term did not exist at the time) as a “progressive and beneficial force”.

Drapeau thinks that Marx took on an anti-colonialist stance after 1850 when he began to interact with Ernest Jones. But even reading just Marx’s and Engels’ famous speeches on Poland in November 1847, we see that Marx spoke of the need for the liberation of oppressed nations as a precondition for the struggles of the working class, and Engels advocated the famous proposition, later frequently used by Lenin, that “a nation cannot become free and at the same time continue to oppress other nations” [2]. In The Condition of the Working-Class in England, Engels further makes a case for the important role that the Irish have played (or could play) in the British labour movement, and that the racial and ethnic diversity of the working class is a positive rather than a negative for the movement.[3] Furthermore, in his 1847 book The Poverty of Philosophy, Marx said that slavery and the colonies are an integral part of modern capitalism, and went so far as to say that “direct slavery is just as much the pivot of bourgeois industry as machinery, credits, etc.”[4].

Drapeau’s claim that Marx’s views of colonialism turned 180-degrees after 1850 when he became anti-colonialist is misleading. It is true that, after 1850, especially from the middle of the 1850s, Marx denounced more strongly and more concretely the criminality of British imperialism. And perhaps it is also true that there was some influence of Ernest Jones on Marx’s thinking on this point. But Marx never lost sight of the perspective that the global spread of capitalism as a world system would create the material preconditions for communism as another world system.

As an indication of Marx’s turn to anti-colonialism Drapeau cites Marx’s words in his August 1853 article in the New York Tribune, “The Future Consequences of British Domination of India,” that “the profound hypocrisy and inherent barbarism of bourgeois civilization”[5]. But Drapeau ignores the fact that Marx’s article simultaneously contains the following sentences pointing out the (resulting) historical progressiveness of British domination of India:

The devastating effects of English industry, when contemplated with regard to India, a country as vast as Europe, and containing 150 millions of acres, are palpable and confounding. But we must not forget that they are only the organic results of the whole system of production as it is now constituted. That production rests on the supreme rule of capital. The centralization of capital is essential to the existence of capital as an independent power. The destructive influence of that centralization upon the markets of the world does but reveal, in the most gigantic dimensions, the inherent organic laws of political economy now at work in every civilized town. The bourgeois period of history has to create the material basis of the new world–on the one hand universal intercourse founded upon the mutual dependency of mankind, and the means of that intercourse; on the other hand the development of the productive powers of man and the transformation of material production into a scientific domination of natural agencies. Bourgeois industry and commerce create these material conditions of a new world in the same way as geological revolutions have created the surface of the earth. When a great social revolution shall have mastered the results of the bourgeois epoch, the market of the world and the modern powers of production, and subjected them to the common control of the most advanced peoples, then only will human progress cease to resemble that hideous, pagan idol, who would not drink the nectar but from the skulls of the slain.[6]

Marx’s perspective on capitalism, including its imperialist form, was enduringly multi-dimensional and deeply dialectical. Capitalism is “progressive” in the sense that it creates the material and productive conditions (objective conditions) for a new society, and also creates and unites its gravediggers, the working class (subjective conditions), but the system of capitalism can carry out its historical “progressiveness” only in the most barbaric, violent and exploitative forms. Marx’s Capital thoroughly reveals the most barbaric and violent exploitation and deprivation of capital against workers, and at the same time points out that it creates the objective and subjective preconditions for a new society. This dialectic, Marx thought, applies not only to the capitalist center, but also to the relationship between the center and its periphery, as is clear from the passages cited above.

Of course, this doesn’t mean that there was no change in Marx’s thought on this issue. There were indeed two major shifts.

Secondly, the following shift occurred in his understanding of the creation of preconditions of a new society. Even if capitalism always has both progressive and barbaric aspects, the qualitative forms and quantitative proportions of both can vary from the more barbaric forms to the more humane ones, depending on the struggles of the workers and the oppressed peoples. This is fully possible even within the capitalist system. In order to create the material conditions for a new society, it is not necessary to have unrestricted exploitation of workers that leads to mass overworked deaths. Through the limitation of the working day, a better capitalism is possible (of course it cannot last forever, capitalism is constantly returning to barbarism[7]), and such capitalism is what makes the true material conditions of a new society possible. That is to say, capitalism, when left to its own freedom, can prepare the material conditions for a new society (whether within the developed countries or in the peripheral countries) in the poorest and most distorted form, and only as a result of the struggle of the workers and the oppressed peoples will capitalism be able to establish more decent material conditions. And through such partial victories and the class struggle for them, the transforming capacity of the working class will be gradually enriched, and this will be the higher subjective condition for a new society. Marx gradually came to believe that this was the case. This was an important shift from his early understanding in which he expected an explosive revolutionary uprising of the working class from the unilateral progress of their over-exploitation and pauperization.

Similarly, he did not think that the way in which capitalism is transferred to the periphery is always by shamelessly colonialist methods, as the British empire did for India and China. On the contrary, Britain even strengthened feudalistic relations of domination in India in order to make its rule in India more efficient. Barbaric colonialism could bring only a very distorted, semi-feudal capitalism to the periphery.

Thus, while adhering to the basic position of the dialectic of progress and barbarism in capitalism, Marx shifted his emphasis and deepened his awareness of the specific nature of that dialectic. It is clear that these two changes are interrelated. Inasmuch as there is a certain range and variety of ways of creating material and subjective conditions, it is natural that he more strongly attacked the barbarism of the British empire’s actual methods of rule in India at the time. This critique by Marx does not deny the historical “progressiveness” of capitalism in terms of the preparation of the material conditions of a new society; on the contrary, it is part of the collective effort to become a true preparation, the formation of true material conditions.

Over and above this critique of Drapeau’s remarks, it might be additionally noted that Marx, in his changing perception of Russia in his latter years, began to question even the inevitability of bringing about capitalism in the first place (or whether it was progressive) with respect to the Eastern world. This, too, can be understood as an extension of the development of his recognition that there are a variety of ways and forms to create the material and subjective preconditions for a new society.

In these last years, Marx argued that the Russian obshchina (a form of common ownership of land in rural commune) as such was not a foundation for communism, but if the Russian (bourgeois democratic) revolution was to be complemented by a (proletarian socialist) revolution in Europe which already created the material and subjective preconditions for a new society, then the Russian obshchina could be a ‘fulcrum’ or ‘starting point’ for communism.(e.g., his letter to Vera Zasulich and the 1882 preface to the second Russian edition of the Communist Manifesto).

This was, however, a false inference that took Marx too far in his view of a variety of conditions for a new society. The actual process of development in Russia contradicted his expectations and allowed capitalism to take hold and develop in Russia to the point where it produced 10 million workers in 1905 (this number was greater than the number of workers in Britain in the 1860s, the most developed capitalist country at the time of the writing of Capital). And it was this vast and more intensively organized workforce in the Russian big factories that produced the Russian revolutions of 1905 and 1917. After all, the democratic and socialist transformation of Russia could not be substituted by the Russian revolutionary intelligentsia (the Narodniks) or by the European socialist workers, it had to be carried out by the Russian working class with its allies, the Russian peasants.[8] This is the principle involved in the fundamental idea from the youth of Marx and Engels that the emancipation of the working class is the project of the working class itself, and this principle cannot be violated, no matter how much variety there is in requisite conditions for a new society. This is especially true in a country as large as Russia.

Nevertheless, we should not think of Marx’s view of Russia in his last years as a simple turn, but rather as the result of the evolution that gradually occurred after the 1850s in his understanding that there could be a variety of ways and forms of creating material and subjective conditions for a new society.

[3] “And to this [deepening the chasm between workers and bourgeoisie,] the Irish immigration further contributes by reason of the passionate, mercurial Irish temperament, which it imports into England and into the English working-class. The Irish and English are to each other much as the French and the Germans; and the mixing of the more facile, excitable, fiery Irish temperament with the stable, reasoning, persevering English must, in the long run, be productive only of good for both.” (The Collected Works of Marx and Engels, Vol. 4, p. 419.)

[7] See, Seiya Morita, “The Origins of the Slogan ‘Socialism or Barbarism’ and its Contemporary Significance: From the Communist Manifesto to the Present Day”, Links International Journal of Socialist Renewal, 21 July 2020, http://links.org.au/origins-socialism-or-barbarism-contemporary-significance-communist-manifesto-present-day