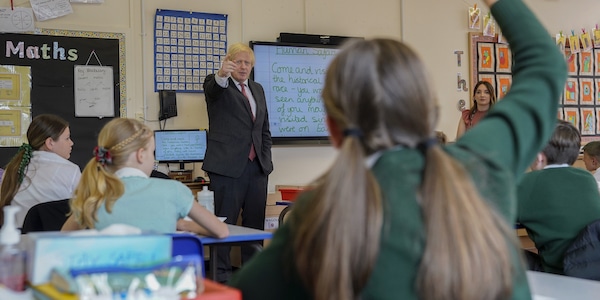 Last week, the Department for Education (DfE) released new guidance to help ‘implement the new statutory curriculum’. The guidance states that schools should not work with, or use resources produced by, organisations that ‘take or promote extreme positions.’ The broad nature of the guidance implies that any divergence from the government’s position may be deemed unacceptable. The Coalition of Anti-Racist Educators (Care) and Black Educators Alliance (BEA) are already threatening legal action in response, noting the limits to anti-racist teaching the guidance will likely impose.

This dangerous escalation of Conservative authoritarianism should ring alarm bells. It is part of a wider picture in which we can see the political right wrangling to cement global hegemony. In the United States, for example, President Donald Trump has denounced Critical Race Theory and ‘diversity training’ and instructed federal agencies to stop funding any programmes that suggest the ‘United States is an inherently racist or evil country’. In Brazil, President Jair Bolsonaro’s government has set about defunding Sociology and Philosophy programmes, making revisionist changes to school textbooks, and threatening teachers who criticise the government.

Like the machinations of Trump and Bolsonaro, the DfE guidance demonstrates that the UK government recognises and fears the power of education. Conservative leaders know that, even while it is almost invariably used to reproduce the status quo and perpetuate the ideology of those in power, education also has the power to spark and feed social change.

By allowing it to deem any and all views that challenge their power as ‘extreme’, the guidance cements the government’s position as the rational norm. Oppositional voices are integral to a healthy democracy, particularly in a society with such gross injustice and inequality as ours. By silencing oppositional voices this new guidance is an attempt to consolidate power. This is the creeping path towards totalitarianism.

The vague examples of so-called ‘extreme positions’ cited in the DfE guidance include a ban on resources produced by organisations that ‘desire to abolish… capitalism’. This prohibition may be understood as an establishment backlash against the fears that were evoked (or at least mainstreamed) by the Corbyn-inspired resurgence of socialism. Buoyed by Labour’s Keir Starmer-driven shift to the right and the increasing indistinguishability of the UK’s major political parties, the guidance is an attempt to shore up the neoliberal capitalism-loving political consensus.

Yet, with over four million children living in poverty and great economic uncertainty on the horizon (the effects of which will be unevenly felt), it is essential that students are encouraged to think critically about a capitalist system that fails us time and time again. Such criticality enables students–and therefore society–to better understand the government’s inadequate response to the pandemic, and to see how the capitalist economy has come to be prioritised over health, wellbeing, and mortality: profit before people. It teaches students to raise questions about the vested (capitalist) interests that, for example, have pushed university students to return to campus despite safety warnings, only to be locked up and patrolled in lucrative student halls. It is this kind of questioning that the government is keen to extinguish – and it is this kind of questioning that is key to the future of our society.

The guidance also warns against the promotion of ‘divisive or victim narratives that are harmful to British society’. The DfE is not explicit in its meaning, but it is worth noting that the government’s race commission adviser has previously characterised anti-racist campaigners as ‘affirming a culture of grievance’ that ‘harms the very people they aspire to help’. It is also worth considering who and what is imagined when the state speaks of ‘British society’ and ‘British values’.

Whether evidenced by Grenfell, the Windrush ‘scandal’ or more routine social murder, there are many real victims of state policy, and many victims of racial capitalism more broadly. Interlocking systems of capitalism, hetero-patriarchy, ableism, and white supremacy mean that some are more likely to fall ‘victim’ than others. For a government that seems unwilling to face up to structural and institutional causes of injustice–dismissing talk of institutional racism as unsubstantiated and promoting instead in the myth of meritocracy–it isn’t hard to imagine how a prohibition on ‘victim narratives’ will be used to quell discussion of, and potential resistance to, oppression.

We should also be worried about the guidance’s warning against ‘selecting and presenting information to make unsubstantiated accusations against state institutions.’ This incredibly broad and vague language creates a real danger that, when refracted through a Conservative lens, any criticism of the state and its institutions will be curtailed. Democratic state institutions must always be subject to public and political critique. This is particularly true when those institutions repeatedly fail the most vulnerable. In order to imagine brighter futures and to do the radical work of envisioning, for example, the defunding and abolition of policing, students should be encouraged to think critically about state institutions.

As writer and organiser Joshua Virasami warned in response to the DfE guidance, ‘fascism never arrives in a day… it slides toward us’. When we catch such a glimpse of the seeds of authoritarianism, we must take note. If dissent-curtailing restrictions were presented to us through a dystopian TV series, or about an elsewhere, we would be appalled. It is remarkable that we might let it happen right under our noses.

Earlier this summer, I wrote a report on Race and Racism in English Secondary Schools for the Runnymede Trust. Noting the tragic death of Shukri Abdi, I emphasised ‘how urgent it is that schools prioritise anti-racism’. In the context of the state’s wider failings in addressing racism and inequality, the new DfE guidance threatens to stand in the way of such recommendations, and halt the important transformative work that needs to be done.

There is hope, however. As the state looks to sure up its power, they should be aware that the harder they crack down, the more they fuel opposition and resistance. With a long tradition of community-led political education in Britain, perhaps now is the time for a widespread resurgence of radical grassroots education projects. It is in these community spaces that our future society will be built.

Remi Joseph Salisbury is a Presidential Fellow in Sociology at University of Manchester and a Red Pepper columnist.