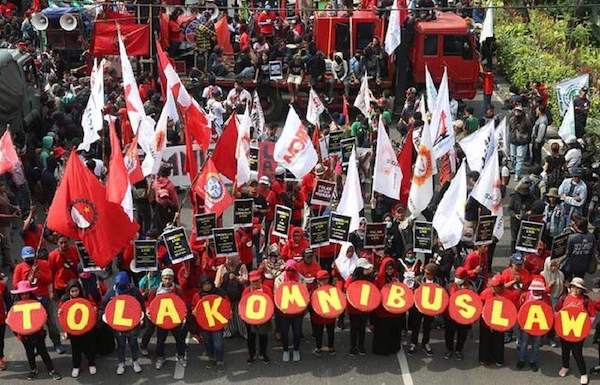 Because of the threat that the Omnibus Bill poses to Indonesian society, workers, students, peasants, and all elements of social movements have boldly opposed it.

On 5 October, in the middle of the COVID-19 pandemic, Indonesia’s People Representative Council (the Dewan Perwakilam Rakyat, or DPR) adopted the “Omnibus Bill on Job Creation”, a collection of regulations on labour law, investment and the environment vehemently opposed by labour movements across the country.

The Omnibus Bill is the successor of the “Master Plan for the Acceleration and Expansion of Indonesia’s Economic Development” (MP3EI); both were formulated to create a “friendly climate” to investment. Since the 1965 anti-communist purge, Indonesia’s political leadership has dedicated itself to fostering economic growth and foreign investments, no matter how they affected the welfare of working people.

Now, many of the articles included in the Omnibus Bill pose a significant danger to the well-being of Indonesia’s working people and the environment. The sole purpose of the bill is to drive capital accumulation, i.e. to trim due diligence processes for granting business permits, reduce labour costs, perpetuate the flexible labour market system, and suppress trade union activities.

Both the government and DPR argued that easing business permits would reduce corruption. However, it has already become clear it will only give big business leeway to exploit natural resources or build infrastructure with less regulation. For example, requirements for a full AMDAL (environmental impact analysis) procedure, a minimum standard needed in assessing business operation, will be relaxed.

“Job creation” is nothing but a pretext in the Omnibus Bill. The story of the “demographic bonus”—which implies Indonesia’s overabundance of a reserve army of labour–has justified the proliferation of low-paid casual jobs in Indonesia’s flexible labour market. It will also further increase the informalization of work, ending job security and social protection for the working class–which is already almost extinct.

But workers in the formal sector are all too familiar with precarity. Many of them are already caught in casual working arrangements or working in hazardous environments. With the Omnibus Bill passed into law, their vulnerability will be expanded to all sectors.

The drafting of the bill was itself a violation of the democratic process, involving only representatives of capital. The task force that gave feedback on the bill, fully drafted by the government through the Coordinating Ministry for Economic Affairs, was dominated by Indonesia’s business associations while labour representatives were excluded. Moreover, both the government and DPR have refused to circulate the bill draft publicly from the very beginning.

Because of the threat that the Omnibus Bill poses to Indonesian society, workers, students, peasants, and all elements of social movements have boldly opposed it. Although it is dangerous to rally during the pandemic, hundreds of thousands of people in different cities now take to the streets..

At the same time, police repression has dramatically increased. Many of the protesters were beaten and arrested without due process and narratives about rioting protesters and vandalism continue to be echoed by the government, social media influencers, and mainstream media to delegitimize protest.

Indonesia is in a dire situation. We need all our international comrades to stand in solidarity with the popular resistance in Indonesia, directed not only against this particular draconian bill but also any type of capitalist exploitation.