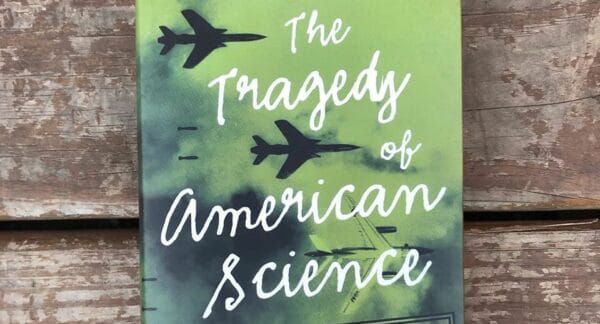 American1 science has aspired, for a long time, to present itself as exceptional.2 In 1966, the historian Hunter Dupre invited his colleagues to celebrate, in his view, this long-neglected exceptionalism. More than half-a-century on, Clifford Conner takes on and upends Dupre’s grand thesis. With this mournful but marvelous survey, Conner challenges dominant narratives on the status, objectivity, and integrity of American science, revealing the role played by money, military, and politics in producing its apparent superiority in the aftermath of World War II.

A historian of science himself, Conner is fully cognizant of the accomplishments of American science and technology. In an earlier book, A People’s History of Science: Miners, Midwives and “Low Mechanicks” (2005), he demonstrated the contributions of ordinary citizens to science, but he also warned of the corruptive potential of corporate money and military power. The Tragedy of American Science is a meaningful sequel to that story, which follows the downhill trajectory of the sciences, as potential triumphs gave way to mere byproducts of war technology. To show this, Conner diligently traces the course of developments in the physical, biological, and social sciences, naming the institutions, think tanks, networks, and individual scientists who, for more than seven decades, have advanced imperialist objectives and corporate agendas, all in the name of scientific inquiry. The diversity that Conner reveals about these actors with respect to background, discipline, reputation, and affiliation is impressive.

Conner goes about this immense task in four sections, first examining corporatization of science, then militarization of science, then asking “how we got into this mess,” and finally explaining “the only way out.” He begins the first section with the “big fat lie” of nutrition scientists dredging data to formulate government dietary guidelines under the aegis of government agencies, but with funding from major corporations such as Coca-Cola; the resulting nutritional “science” in fact threatens the health of the American population. Likewise, in agriculture, the aggressive development of Genetically Modified Organisms (GMOs) has put global food supplies under the monopolistic control of American multinationals such as DuPont and Dow, exacerbating global inequalities in access to food. These developments have been facilitated by reputable organizations such as the National Academy of Sciences, whose members are tainted by corrupting payments (in the form of research grants and consultant fees) from big pharma, big oil, and the “charitable” foundations of the Koch brothers and their ilk.

The second part of the book provides an equally informative account of the dominance of the military in the funding of science, which has reached new levels under the Trump Administration with the willing cooperation of scientists. Conner explains this within the frame of “weaponized Keynesianism” (which seeks to mitigate the recurring cycles of capitalist crisis through military spending) and the related principle of “deliberate waste” (economic output that, in Conner’s words, “will not house, feed, clothe, or otherwise benefit anybody in any way”). What might count as deliberate waste in the U.S. domestic economy, however, serves a very different purpose abroad—namely, the projection of American imperial power around the globe. In emphasizing the domestic function of weaponized Keynesianism, therefore, Conner might have given its imperial function short shrift. Nonetheless, he superbly chronicles the role of the social sciences in advancing the cause of militarists, showing how physical and biological scientists serve as the designers and architects of the weapon systems, while a whole army of economists, psychologists, behavioral scientists, and social scientists are mobilized to maintain the myth of the superiority, legitimacy, and righteousness of American militarized science.

So how did we get here, then? The third part of the book takes up this question and gives an “origin” story of these pernicious developments, starting with the Manhattan Project and the myth of “atoms for peace” that continues to sustain the unclean, unsafe, and uneconomical nuclear energy industry. The cast of characters that has staged this twisted drama is large, but its stars include DARPA (Defense Advanced Research Project Agency), U.S. appropriation of Japanese wartime medical experimentation, and the RAND Corporation (which Alex Abella has dubbed “the think tank that controls America”). The most damning act in the drama, however, is the blanket recruitment of Nazi scientists in all major branches of American science. From rocket and space science (call it hell science) to medicine (call it concentration camp science) and psychology (call it torture science), former Nazi criminals were brought in one after the other and assigned to prominent scientific positions in the US. And with what justification? To borrow from Tom Lehrer’s parody of Wernher von Braun, the Nazi-criminal-christened-the-father-of-American-space-science: “Once the rockets are up, who cares where they come down?” The sentiment here might be expressed:

So long as a scientist is willing to do the dirty work, who cares where they’re from?

Given everything the book documents, does this history ultimately qualify as a tragedy? As Conner indicates early on, in framing the history of American science in this fashion, he is inspired by William Appleman Williams’s The Tragedy of American Diplomacy. Williams took inspiration from Karl Jasper who found “genuine tragedy…only in that destruction which does not prematurely cut short development and success, but which, instead, grows out of success itself.”3 How else can we understand the history that Conner lays out so vividly in front of us? And in what other terms than “tragic” can we make sense of the fatal failures of American science against the backdrop of its alluring success? While individual “war-time” scientists have instigated very real material harm, the bigger tragedy is in the political, economic, and social system that has turned science into an instrument of exploitation, violence, destruction, and murder. As Conner points out, “the tragedy of contemporary science is less about science than about economics, politics, and public relations.” The COVID-19 crisis has lifted this veil, highlighting the “need to replace the global economic system that serves private interests with one that serves the public interest.”

It is in that spirit that Conner goes beyond revelatory expositions, using the final section of the book to provide “a way out.” As a self-proclaimed “science-and-technology junkie” with a “sunny disposition,” he outlines some of the ingredients of a science for human needs. Taking as an example the Cuban health system— with its expansive medical internationalism and the highest doctor-to-patient ratio in the world—the ingredients include a list of action items that would put science “under genuinely democratic control in the context of a global planned economy.” The history that Conner has laid bare impels all of us, as citizens or working scientists, to avoid the Faustian bargain of American exceptionalism.

Hamid Ekbia is Professor of Informatics, International Studies, and Cognitive Science at Indiana University, Bloomington, where he also directs the Center for Research on Mediated Interaction. He is interested in the political economy of computing, in the future of work, and in how technologies mediate socio-economic, cultural, and geo-political relations of modern societies. His most recent co-authored book Heteromation and Other Stories of Computing and Capitalism (MIT Press, 2017) examines computer-mediated modes of value extraction in capitalist economies, and his earlier book Artificial Dreams: The Quest for Non-Biological Intelligence (Cambridge University Press, 2008) is a critical-technical analysis of Artificial Intelligence.