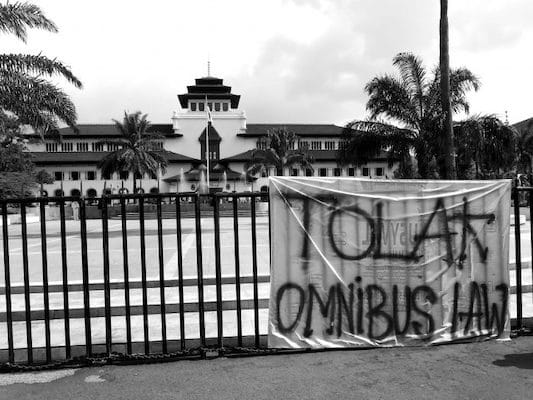 Indonesia’s president, Joko Widodo (or ‘Jokowi’) introduced the concept of an ‘Omnibus Law’ (or ‘Jobs Bill’) at the start of his second term (2019-2024) as a way to speed up changes to laws seen to be hampering economic growth, development and investment.

The law, drafted in just three months by the Coordinating Ministry for Economic Affairs, was widely criticised for a lack of public input, transparency and public participation. No draft was made accessible to the public, and the government taskforce set up to guide the process was mostly made up of entrepreneurs and representatives of employers’ associations, with no voice given to trade unions or workers. Attempts to keep the law’s contents out of the public eye have sparked widespread anger and protest against the impacts the Bill would have on workers’ rights.

In October 2020, the House of Representatives ( DPR–Dewan Perwakilan Rakyat) and the Indonesian government passed the bill into law, supposedly as a way of increasing employment during the COVID-19 pandemic. They are taking advantage of the pandemic situation to pass these legal changes. The Omnibus Law amends some 79 existing laws, including labour laws, planning regulations, mining regulations and environmental protections; more than 1200 articles of pre-existing laws are affected. The removal of this ‘red tape’ is an attempt to expedite business permits and attract greater foreign investment.

The law reduces the leave entitlements and the social security (including retirement) rights of many employees, and gives dangerous leeway for employers to more intensively exploit workers. It also eliminates the need to take into account inflation and cost-of-living criteria to determine the minimum wage. The new provisions will also enable employers to keep workers on temporary contracts for an indefinite period of time, with the risk of being subjected to extra working hours for no increased pay. Other rights under attack are paid leave for menstruation, and leave days for marriage and family events and for religious holidays. With the added scrapping of environmental standards, this amounts to a truly catastrophic legal package.

The Omnibus Law builds on other neoliberal reforms implemented by Jokowi in recent years. One of them was initiated in 2018, when he issued Presidential Regulation No. 86/2018, which aims to neoliberalize land, creating land markets and land financialisation, hidden behind a populist discourse of ‘land reform’. The Global Land Forum in Bandung in 2018 became an international political stage for Jokowi, as well as political stage for protests against this regulation. At the start of Jokowi’s second term, related revisions were made to the Corruption Eradication Commission (KPK) and the Constitutional Court (MK) which make them weaker, and laws pertaining to land and to mineral extraction (Minerba) were likewise subjected to business-friendly amendments, triggering the wave of protests under the slogan #reformasidikorupsi(‘Reform corrupted’).

Nonetheless, these legal changes succeeded in weakening any oversight of Jokowi’s reform process within the state institutions, even if the attempt at land reform was less of a complete success. Capitalising on the crisis caused by COVID-19, the government drafted the Omnibus Law in secret and rushed it through the legislature rapidly. There are said to be five different versions of the draft which were circulated, and authorities have not clarified which was the final draft passed in the House of Representatives plenary session, with even the page sizes differing from one version to the next.

The Omnibus Law is not only detrimental to workers, but is detrimental to the rights of the entire population. For example, the law’s agrarian clauses allow the government to build industrial estates, toll roads or dams on land seized from its individual owners, reimbursing the owner with less than the land’s value or, in some cases, not reimbursing them at all. There is a precedent for this land-grabbing in Indonesian law as the legality of land ownership is very chaotic.

This land-grabbing is related to the mineral and coal industry and the large plantation sector (above all in palm oil production), and prepares the way for major sell-offs and land transfers to large investors. Taking the example of palm oil land, this is controlled by 25 tycoons (at the head of 25 business groups), which already control 16 million hectares. This is the case not only in the plantation sector, but also in the mining sector with large land holdings. They will now be able to take even more land and will be allowed 90-years terms of use on it, up from 30 years before the Omnibus Law.

The Omnibus Law also marks an authoritarian shift in modes of governance, granting the government the authority to change the law simply by issuing a government regulation, without oversight from the legislature or the courts.

This builds on previous legal changes such as the earlier revision of the Constitutional Court (MK–Mahkamah Konstitusi), which makes it easier for the government to simply ignore MK decisions; since 2013-18, 24 MK decisions that been issued which have not been implemented by the government. At the same time the government has further weakened the Corruption Eradication Commission (KPK), making any efforts to eradicate corruption, collusion and nepotism even harder. With the changes and revisions under Jokowi, the KPK is now mostly made up of police officials who are close to the government and the legislature, After the 2019 election (coterminous with the presidential election), most of DPR (55%) members are Indonesian business oligarchs with stakes in extractive and plantation companies. This means the KPK is unlikely to act on the clear tendencies towards corruption, collusion and nepotism in the Omnibus Law itself, which is driven by these same business interests.

The protest movement breaks out

Tens of thousands of people have staged a nationwide strike and protested in the days since the passage of the law, demanding its repeal. The protests continued to build across the country, despite mounting repression from the government, which invoked anti-Covid laws as well as regular restrictions on civil disobedience.

All cities in Indonesia, including Bandung, saw street protests which encompassed of workers’ groups, university students, high school student and civil society organisations, culminating in clashes with the military and police in the second week of October. The Education and Culture Ministry’s Higher Education Directorate General issued a circular discouraging university students from participating in protests against the Omnibus Law and asking faculty members to promote the recently passed law. Despite this, many lecturers and university academics supported the protests, often against the stance of their university Rectors. Students were threatened with being blacklisted at university, making it difficult to continue their studies, and with police action which would seriously affect their future job prospects, but neither of these deterred them joining the protests.

In Bandung, clashes with police flared up outside the governor’s office, of the Gedung Sate, and West Java Governor Ridwan Kamil came out to appease the protesters with a message supposedly rejecting the Omnibus Law and in support of the protest; this proved to be a political trick, and Kamil is now once again making himself an advocate for the law. 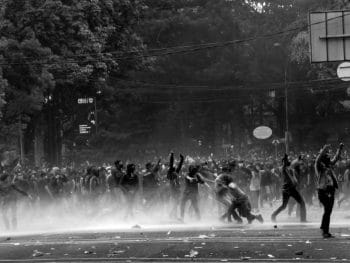 Here, protesters sang, shouted and cursed at the government and the DPR, reprising many of the slogans that characterise the movement: ‘Turunkan Jokowi’ (‘Down with Jokowi!’) ‘Jokowi Penipu’ (‘Liar Jokowi!’); ‘Rezim penipu, rezim penghianat, rezim perampok!’ (‘Liar regime! Treacherous regime! Thieving regime!’). Other slogans translate as ‘Covid kills quickly, the DPR kills slowly’, and ‘The DPR is the real virus’.

The police swept the crowd and carried out arrests, demanding to see the student cards and the credentials of students and union members to determine their legal right to protest. Black blocs among the protesters were infiltrated by police intelligence officers, while other police spies disguised themselves as students and slipped in among the student contingents. Protesters were accused of carrying out attacks, but agents provocateurs also disguised themselves among the protesters and deliberately started clashes.

In Bandung, police arrests and beatings were widespread; the police used tear gas and also carried out arrests and acts of violence against paramedics and journalists. Black bloc tactics, involving tactical clashes with groups of police, have emerged within the movement and helped reveal the limits of the representational basis on which most protest movements operate. Political violence by the police is becoming more common, state violence is becoming more brazen, and the list of ‘criminal acts’, not recognised as legitimate protest, is ever-widening.

There have been reports of clashes, arson and arrestsin at least a dozen cities: Greater Jakarta; Yogyakarta; Pontianak, Malang, Jambi, Medan, Surakarta, Bandung, Makassar, Palu, Palembang, and Denpasar. In several days of protest in Bandung, dozens of people were injured and around 300 people were arrested, while all over Indonesia there were 6,000 people arrested and 507 people still missing. The question is why they disappeared, and where they have been all this time. Police officers did not follow legal procedure and used excessive force to disperse the crowds of protesting students and workers, firing tear gas without warning, physically assaulting protesters and forcibly stripping them of their clothing.

Apart from making brutal arrests of protesters on the street, the police target communications that they describe as ‘fake news’. They have created cyberpatrols to intimidate critics and to propagate negative views of strikes and public protests against the Omnibus Law. Coupled with this is a hijacking of mainstream media and social media to manipulate public opinion via selective, controlled, biased reporting, carefully tailored to support the Omnibus Law. The state have also made arrests of opposition political elites who are considered to be undermining Jokowi’s government or involved in the confrontations.

An end to the current authoritarian-technocratic regime will not come from among the oligarchs or the self-serving politicians, through the ballot box, or from virtue-signalling corporations, but from the actions of conscious, disillusioned individuals. Indonesia’s neoliberal regime is using the pandemic to attack workers’ rights and environmental protections. Workers and students have other ideas; those who have thrown off the psychic shackles of the mainstream political narratives. The protests must continue until the Omnibus Law is cancelled or even until the Jokowi government is pulled down.

Who can quench a fire, when it is growing larger and larger? This regime has played with fire since the beginning. They cannot blame the protesters any more than they would blame the flame.

In discussion with the author, some edits for purposes of clarity were made to this article on 18/10/2020.