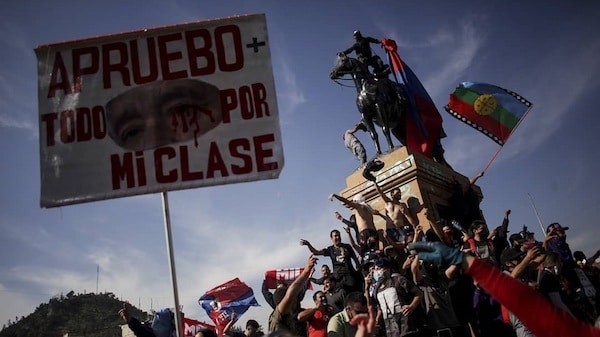 This October 25 holds a special significance for Chile. On this date, the much-awaited national plebiscite will be held in the South American country. Nearly 15 million Chileans will vote to decide whether or not they want to change the current constitution that was written and imposed in 1980 under the military dictatorship of General Augusto Pinochet (1973-1990). Originally, the plebiscite was scheduled for April 26, but was postponed due to the COVID-19 pandemic.

Why is the popular referendum taking place?

This popular referendum is the result of the demands raised by Chileans during the social uprising that began on October 18, 2019 and continued for almost 5 months until the COVID-19 outbreak in March this year. During these months, millions of Chileans took to the streets in rejection of the neoliberal policies of the current right-wing government led by President Sebastián Piñera and the glaring inequalities in the country. Social movements, trade unions and progressive political parties in the country argued that the constitution drafted by Pinochet laid the foundation for the rampant inequality and neoliberal economic system and demanded a new and inclusive constitution with people’s participation.

What will be voted on in the plebiscite?

What will happen if Chileans vote to draft a new constitution?

If the need for a new Constitution gets approved, the citizens will go to the polls again to elect the members for either of the two authorities: “mixed constitutional convention” and “constitutional convention.” This vote will be held alongside the regional and municipal elections on April 11, 2021. The elected authority will have nine months to work on the new constitution. Two months after its preparation, the final draft of the new constitution will be put to another popular referendum for ratification. It will be a mandatory voting process and is expected to happen in the second half of 2022.

Furthermore, if the “approve” and the “mixed convention” votes win, the National Congress will internally elect 86 people in the parliament to draft the new constitution and another 86 seats will be divided equally in the direct election. Meanwhile, if the “approve” and the “constitutional convention” option wins on October 25, the parliamentarians will not participate and 155 representatives will be chosen in a direct election. Half of these representatives will be women. If this alternative wins, it would be the first body in the world to draft a constitution with equal participation from women.

What do the opinion polls suggest?

All opinion polls suggest that the “approve” option will sweep to victory. According to the Pulso Ciudadano (Citizen Pulse) study by the consulting firm Activa Research, published on October 10, 84.8% of the potential voters are in favor of a new constitution, while just 15.2% are against it. Besides, the study also indicated that 77.7% of the citizens would choose the “constitutional convention” option. Meanwhile, 22.3% would prefer the “mixed convention”.

What are the arguments for and against the new constitution?

Those who support the “approve” option – the working class, the social movements, trade unions and left-wing political parties – believe that the new charter will allow a fairer social spending to replace the persistent inequalities due to the current constitution, which favors private interests and prevents any substantial change to the system. They have campaigned to urge the citizens to vote, approve the drafting of a new constitution and mark the option of “constitutional convention” for writing the new Magna Carta.

Those who favor the “reject” option – largely wealthy sectors and conservative parties – argue that the existing constitution has been key to Chile’s decades of economic growth and stability.

Who can vote in the plebiscite?

Citizens over 18 years of age are entitled to vote. Additionally, foreigners who are residing in Chile for more than five years and have not been convicted for a crime can also vote. Chileans living abroad can vote from their countries of residence. Consulates will make polling stations available on election day.

What are the voting hours?

What are the health protocols in place given the COVID-19 pandemic?

Chile’s Electoral Service (SERVEL) has published extensive guidelines for the referendum, such as the mandatory use of a face mask, a physical distance of at least one meter among the voters and election officials, as well as special voting hours for those over 60 years of age (2 pm to 5 pm). It has also been recommended that citizens bring their own hand sanitizers and a blue ink pen to vote.

Will COVID-19 patients be allowed to vote?

No, despite the attempts by various social and political leaders to allow the citizens infected with coronavirus as well as those in home quarantine to vote, they will not be able to exercise their right.

When will the official results be announced?

The SERVEL has until November 27 to declare the official results of the plebiscite.

Debt disaster with no escape
Disability, Covid and Capitalism