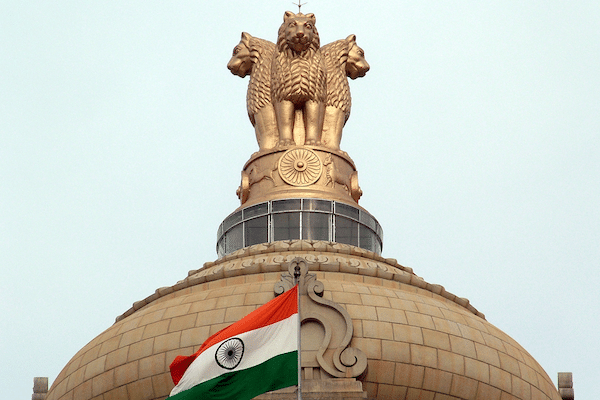 Federalism is one of the basic features of the Indian Constitution. In the Constituent Assembly, Indian economist professor K.T. Shah wanted the terms “federal” and “secular” included in the Preamble itself, but Dr. Ambedkar rejected it on the grounds that the federal and secular character of the republic was understood and did not need specification. The Indian Constitution, in its Seventh Schedule, spelled out the respective jurisdictions of the center and the states in two lists, and areas of common jurisdiction in a third list (Concurrent List). Since then, the center has always tended to encroach on the domain of the states, but this tendency has now acquired a strength where the claim that the country is being pushed toward a de facto unitary state appears to be no exaggeration.

Having persuaded states to give up their constitutionally mandated taxing powers by substituting their main revenue source, the sales tax, with a goods and services tax (GST)—administered by a GST Council dominated by the center—with the promise that their revenue shortfall will be made good, the center has now coolly reneged on that promise. States at present have no taxing powers (except over just three commodities); and the promised compensation from the center has not materialized.

But it is not just control over resources that has been centralized; decision-making too is being centralized against the provisions of the Constitution. Education, for instance, is in the Concurrent List; but the center has recently come out with a new National Education Policy (NEP), without any consultation with the states. The states are simply expected to fall in line and implement the NEP. Agriculture belongs to the State List; and yet the center has just rushed three bills through the parliament, with no consultation with state governments, making far-reaching changes in the country’s agricultural arrangements, which, apart from their impact upon the peasantry, would also mean significant revenue losses for states.

It is not just the states’ domains that are being encroached upon; their very being can now be unilaterally altered by the center. This became clear when the state of Jammu and Kashmir was carved into two separate Union Territories without the consent of the state legislature. The state’s consent to this bifurcation was supposed to have been obtained through the consent of the center-appointed governor, since the state was placed under the governor’s rule at the time. With this precedent being set, any state can cease to exist as a state and can be carved up into any number of fragments at any time—by placing it under governor’s rule and taking the consent of the governor who is handpicked by the center as being legally equivalent to the consent of the state legislature. When the very existence of a state becomes a matter of central discretion, a substantial step has been taken toward a unitary state.

Converting India into a de facto unitary state is the agenda of both the Hindutva forces and the corporate-financial oligarchy integrated with globalized finance capital; it constitutes therefore a prominent element on the common agenda of the corporate-Hindutva alliance that is currently dominating Indian politics.

The federal nature of the Indian state follows from the dual national consciousness that characterizes every Indian—the consciousness of belonging to a particular regional-linguistic group, that is, being an Odiya, or a Bengali, or a Malayali or a Gujarati, or a Tamil; and a consciousness that is pan-Indian. Both kinds of consciousness got strengthened during the anti-colonial struggle; the post-colonial state accordingly sought to accommodate both, through a political arrangement that was federal in character. Maintaining this federal character is essential for preserving the delicate balance between the two. The arbitrary prioritization of one over the other disturbs this equilibrium; and that disrupts the country’s unity. Excessive centralization for instance, by riding roughshod over the regional-linguistic consciousness, tends to encourage its opposite, namely a tendency toward separatism and secession.

The Hindutva elements, however, do not understand this complex reality of India. Since they had nothing to do with the anti-colonial struggle, and since for them India is not a nation-in-the-making but a land of the “Hindus” that has constituted a “Hindu nation” from time immemorial, they look down upon the regional-linguistic consciousness, and the composite pan-Indian consciousness built upon it; they seek to impose from the center a uniformity, such as “one language” and “one culture,” on everyone. They assume an immanent, essential, and (philosophically) “idealist” unity from which every deviation then becomes “anti-national.” The negation of the federal character follows from this: federalism on this perception weakens the “nation.”

The Hindutva elements, in short, are for centralization not only for opportunistic reasons (which of course exist and are significant); but they are also intrinsically and immanently anti-federal, and in favor of a unitary state (as indeed all theocratic states tend to be).

Likewise, the corporate-financial oligarchy also favors centralization. The monopoly of capital over which this oligarchy presides represents centralization in the sphere of the economy; and for realizing its ambitions it requires the support of the state that must also be centralized. A centralized state is the weapon that monopoly capital needs to further its ambitions.

There is, however, an important exception to this rule. There may be situations where the central government in a federal polity is less benign toward a monopoly capital, including a metropolitan capital, than the government of some particular regions within the country. In such a case, a monopoly or metropolitan capital (I am using the two terms interchangeably because the contemporary world is not characterized by intense inter-imperialist rivalry) would want a weakening of the center and a strengthening of the regions—it would, in short, want greater devolution of powers, resources and decision-making within the federal structure. Eventually, of course, it would encourage secessionism on the part of these regions, so that it can use the newly formed centralized states, through the breakup of the larger federal state, for its own purposes.

But of course, where the central government is itself amenable to furthering the interests of the corporate-financial oligarchy, as in India, this oligarchy favors a weakening of the federal structure, and a centralization of powers, resources and decision-making, so that its ambitions are furthered without its having to deal with a range of state-level governments: the latter could have ideas about entrusting projects to local producers, or to the public sector, or about compensation to peasants for lands being taken over from them, that are inconvenient to the corporate-financial oligarchy. The recently enacted agriculture bills, which open the way for corporate encroachment on peasant agriculture through contract farming and unregulated markets, would never have been permitted by several state legislatures; they are being thrust down the throats of the states through central legislation whose very legality is suspect. The fact that such legislation is imposed despite suspect legality is of course indicative of the degree to which the judiciary has lost its independence vis-à-vis the central government.

On the question of converting India into a de facto unitary state, therefore, there is a convergence of views between the Hindutva forces and the corporate-financial oligarchy; the current Bharatiya Janata Party government at the center, which represents a corporate-Hindutva alliance, is engaged, not surprisingly, in carrying this project forward. It is not only in center-state political and economic relations that this tendency is manifest. Even in the spheres of culture and education, there is a strong parallel tendency. The subtle attempt to impose Hindi language on non-Hindi speaking states in India under the NEP may have been thwarted for the time being, but it will be revived again. The curriculum in the NEP is supposed to be centrally prescribed with no consultations with states. All these are pointers to the imposition of the “one culture” idea in the place of the diversity that defines India.

The country, however, will have to pay a heavy price for this thrusting of a uniformity that ignores and overrides completely the reality of regional-linguistic consciousness—for it will create its very opposite effect in ways that are dangerous for our future.