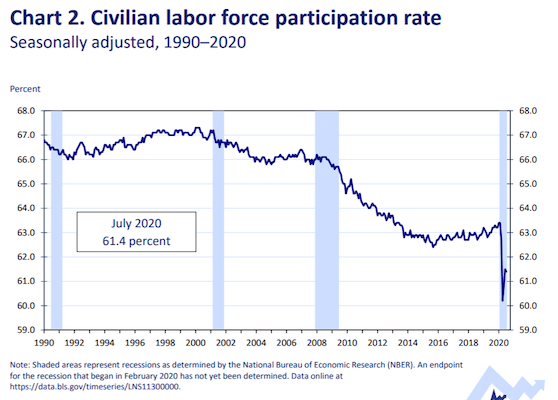 We face a multifacited labor crisis. One of the most important aspects of this crisis is the U.S. economy’s diminishing capacity to provide employment. This development is highlighted in the chart below, which shows the trend in civilian employment over the last thirty years. Civilian employment includes all individuals who worked at least one hour for a wage or salary, or were self- employed, or were working at least 15 unpaid hours in a family business or on a family farm, during the week including the 12th of the month when surveys are taken.

As we can see, it took approximately 4 years to bring civilian employment back to its pre-crisis peak after the 2001 recession, and a much longer 6.5 years after the 2008 recession. The number of years it will take to regain the pre-crisis peak employment level after the end of this recession (which remains ongoing) can be expected to be far greater, with some analysts predicting it could take a decade or more. And of course, new people will be entering the labor force over that decade, generating a serious unemployment problem.

As we can see, this measure has been in sharp decline for many years, including over the years of expansion that followed the 2008 recession. With growing numbers of working-age people, including prime-age workers, forced to drop out of the labor force even during so-called “good times,” there is little reason to expect a significant improvement in employment opportunities in the years following the end of this recession.

These charts make clear that without a significant change in the workings of the economy, working people are facing a future of declining employment possibilities. And it certainly appears that there is no enthusiasm for major economic changes among the most powerful and wealthy in the United States. According to a recent report, U.S. billionaires saw their fortunes soar by $434 billion during the nation’s lockdown between mid-March and mid-May. And Market Watch reported that the S&P 500 and Nasdaq just booked the best postelection day gains in history. The reason:

Wall Street warmed to the possibility of a divided U.S. government and further political gridlock in Washington following a contentious election, potentially keeping Trump administration’s tax cuts in place no matter who sits in the White House.

In sum, if we want a meaningful economic recovery, one that serves majority needs, we will have to fight for it. Among other things, this means finding new ways to strengthen labor-community coalitions and engage people in sustained conversation about the class-contradictory nature of our economic system.