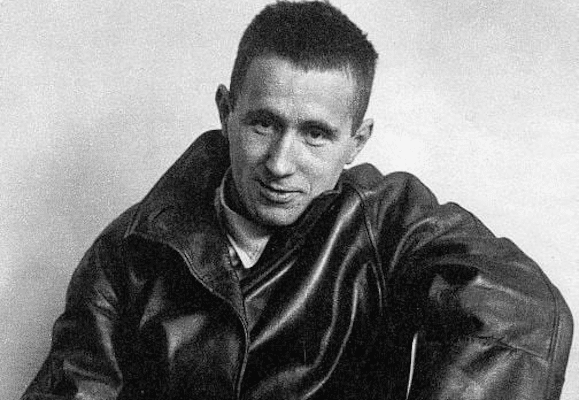 Bertold Brecht put into everyday practice Marxist collectivism and dialectical materialism in his art as few other Western writers have ever achieved. Despite accusations of avidness for money, the German poet and playwright belied any doubts about his ultimate goals: education of the people in Socialism. Moreover, the existence of some thirty volumes of Brecht’s works will bewilder readers who may limit his art to The Threepenny Opera and images of Satchmo singing Mack the Knife.

Brecht was born on February 10, 1898 in Augsburg in Bavaria near Munich and died in East Berlin on August 14, 1956. It was a surprise to me to learn only in these days that he was not a native Berliner at all, as I had long assumed. He studied medicine at Munich University (1917-21), where I too did part of my studies in the 1960s. Brecht’s Munich was a revolutionary Munich, a dynamic city, part of Germany’s November Revolution (1918-19), which led to the weak Weimar Republic. Munich was also the birth place of the Nazi movement led by Adolf Hitler and his Brown Shirts. The explosion of the arts in Brecht’s Munich of the immediate post-WWI resembled pre-war Munich when it was widely said that “everyone was painting, writing or composing” and the artistic movement, Der Blauer Reiter, reigned supreme and, headed by painters Vasily Kandinsky, Franz Marc, Paul Klee and Gabriele Münster, swept through Germany.

Most people will also be surprised to learn that although Brecht’s collaboration with the progressive Viennese composer Kurt Weill was important in his creative life, his major work was not The Three Penny Opera and the song Mack the Knife. Instead his chief contribution was his dramaturgy, his poetry, his own theater ensemble influenced by Meyerhold and Piscator, and his theoretical works.

In his late twenties, Brecht became an ardent Marxist which he remained all his too short life. In those revolutionary times it seemed natural to him that he apply dialectical materialism to his theatrical work: his major targets in all his work were European post-WWI culture, the German bourgeoisie and war, reflecting his generation’s disillusionment with the civilization that had crashed in the Great War. Above all, the  better part of that generation, to which Brecht belonged, still aimed at the ultimate defeat of capitalism.

The editors of the Encyclopaedia Britannica write extensively about Brecht’s creative work: “The essence of his theory of drama … is that a truly Marxian drama must avoid the Aristotelian premise that the audience should be made to believe that what they are witnessing is happening here and now. For he saw that if the audience really felt that the emotions of heroes of the past—Oedipus, or Lear, or Hamlet—could equally have been their own reactions, then the Marxist idea that human nature is NOT (emphasis added by the author) constant but a result of changing historical conditions would automatically be invalidated. Brecht therefore argued that the theatre should not seek to make its audience believe in the presence of the characters on the stage—should not make it identify with them. But should rather follow the epic poet’s art, which is to make the audience realize that what it sees on the stage is merely an account of past events that it should watch with critical detachment. Hence, the “epic” (narrative, nondramatic) theatre is based on detachment, on the Verfremdungseffekt (alienation effect, or the more precise translation, defamiliarization, GS), achieved through a number of devices that remind the spectator that he is being presented with a demonstration of human behavior in (a) scientific spirit rather than with an illusion of reality, in short, that the theatre is only theatre and not the world itself.”In those revolutionary times it seemed natural to him that he apply dialectical materialism to his theatrical work: his major targets in all his work were European post-WWI culture, the German bourgeoisie and war, reflecting his generation’s disillusionment with the civilization that had crashed in the Great War. Above all, the better part of that generation, to which Brecht belonged, still aimed at the ultimate defeat of capitalism.

A reborn Brecht could have written that readers of my account here should not be made to identify with Brecht of the 1920s and 30s—and his generation’s disappointment. We today however can see him as an “epic hero” of his times who faced a set of historical conditions much different from ours today. For a different set of reasons, we too are a disillusioned generation as was his. Some of us also aim at the end of capitalism as a solution of our problems: e.g. threats of nuclear war and man’s path toward destruction of planet Earth. However, we must appreciate Brecht for his accomplishments in his own era as a result of his application of the dialectical process at work—the conditions we face are vastly different, though the underlying evil—capitalism—marked his times as it does ours. Although we see similarities between the conditions facing the Brechtian generation and ours today, there are major differences of degree: his generation had witnessed the destruction of a civilization and searched optimistically, feverishly for the  regeneration of society; instead we are a demoralized generation, a placid generation, facing an Armageddon we perceive but since it is yet to arrive in full force many of us ignore. While his generation emerging from the abyss was filled with energy and hope, we in the West see all around us a largely hopeless and/or disinterested generation, the majority of which, to the dismay of a tiny minority, is largely ignorant of the reality of the dire situation the existence of which only few even recognize. We have in our face the super power USA led by psychopaths of the Dr. Strangelove genre, of “take it all” and “après moi le déluge”. Brecht’s generation faced traditional old regional power blocs; we face the rise of immense almost unimaginable geopolitical blocs covering the globe, by their very nature hostile one to the other, the Western one of which threatens daily to destroy not only the others but human life itself.

That wonderful Berlin writer, Walter Benjamin, noted that his friend Brecht considered the task of the epic theater less the development of actions than the representation of conditions. Brecht aimed at depriving the stage of sensations derived from the subject matter. Brecht recommended dwelling on “historical incidents and purging them of the sensational”. Pure Marxism: Brecht’s theater was conceived to speak didactically to the masses. For that he wanted a relaxed and receptive audience who could better follow familiar, easy to grasp situations. That concept is simple to receive and digest. The class struggle, always present in Marxist writing, “is a fight for the crude and materials things without which no refined and spiritual things could exist.” (Walter Benjamin)

In 1922 while still living in Munich, Brecht had already made his mark in German culture. “At age 24 Bert Brecht has changed Germany’s literary complexion overnight,” wrote the Berlin critic Herbert Ihering in his review of Brecht’s first produced play, Drums in the Night (Trommeln in der Nacht). “He has given our time a new tone, a new melody, a new vision … a language you can feel on your tongue, in your gums, your ear, your spinal column.” That same year Brecht won the prestigious Kleist Prize for his first three plays (Baal; Drums in the Night, and In the Jungle). The Kleist Prize was probably Germany’s most significant literary award until abolished in 1932 as the Nazi rise to power became inexorable.

A fundamental key to Brecht’s approach to Marxism was his enthusiastic emphasis on the collective while downplaying the individual. At the same time his poetry and his written plays seemed insufficient for his insatiable artistic thirst. His association with a new, post-Expressionist movement in German arts, Neue Sachlichkeit (New Objectivity) prompted him to develop his Man Equals Man (Mann ist Mann) project, a kind of Brecht collective—varying groups of collaborators with whom he henceforth worked—an approach mirroring the artistic climate of the middle 1920s and typical of Munich arts since Der Blauer Reiter movement in the early part of the century. Following the idea of the collective vs. the individual, two films, Eisenstein’s Battleship Potemkin and Chaplin’s The Gold Rush, introduced Brecht to dialectical materialism and apparently prompted him to closer studies of Marxism and socialism. In 1964 he himself revealed in  (BRECHT, pp 23-24): “When I read Marx’s Capital  I understood my own plays….Marx was the only spectator for my plays I’d ever come across:” He then praised Bolshevik collectivism (the replaceability of each member of the collective in his play Man Equals Man  produced in Darmstadt) and the red terror in The Decision (Die Massnahme.)

The collective adaptation of John Gray’s The Beggar’s Opera with lyrics by Brecht and music by Kurt Weill, The Three Penny Opera (Die Dreigroschenoper), was the big hit in 1920s Berlin, influencing music worldwide. Hildegard Knef sang Mackie Messer after WWII. Popular singers such as Frank Sinatra and Louis Armstrong made hit recordings of the song called in English, Mack the Knife. A famous line from the work underscored the hypocrisy of the conventional morality of the Church and the establishment in the face of working-class hunger and deprivation. Erst kommt das Fressen, Dann kommt die Moral. First the Grub, (literally: eating like animals). Then morality.

Both Brecht and Weill were keen to revolutionize the tired and bourgeois opera tradition. From that desire emerged the 1927 Mahagonny Songspiel, an operetta that took Brecht’s Mahagonny poems which Weill set to music. It was a statement of radical theater, set in a boxing ring, a story relating the greed in the fictional godless pleasure seeking city of Mahagonny.