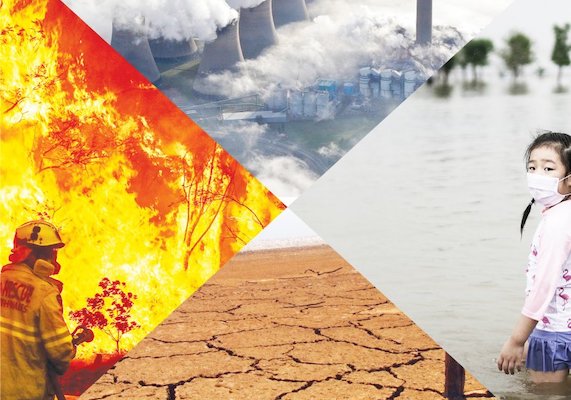 Climate scientists now believe their predictions about the rate of the global temperature increase have been too conservative, and stronger and more decisive action is needed to reduce dangerous greenhouse gas emissions.

In this context, putting the emphasis on net zero emissions by 2050 simply helps the conservative parties, which are not moving away from their fossil fuel mates because the political pressure for change is not great enough.

The Climate Reality Check 2020 (CRC) by David Spratt, Ian Dunlop and Luke Taylor of the National Centre for Climate Restoration argue that an emergency response would make climate the number one priority of politics and economics.

They provide accessible data showing that warming is speeding up and that a global 1.5°C warming is likely by 2030–or even earlier. Warming has accelerated over 2010–19 they say, and the next 25 years are projected to warm at a rate of 0.25–0.35°C per decade.

The conservative estimates made by the Intergovernmental Panel on Climate Change (IPCC) have been shattered: the latest generation of climate models suggest 1.5°C may be only five to seven years away–a decade ahead of the IPCC projections.

CRC says the faster rate of warming is the direct result of rising greenhouse gas emissions, as well as declining air pollution and natural climate cycles. These lead to ocean stratification, with a hotter top layer contributing to faster warming.

CRC quotes British Professor of Energy and Climate Change Kevin Anderson as saying the world is currently on a path to 3–5ºC warming by 2100. He warned that a 4°C warmer future is “incompatible with an organised global community”. That sort of temperature rise is “beyond adaptation”, he said, because it will “devastate the majority of ecosystems and has a high probability of not being stable”.

The Australian Bureau of Meteorology has also estimated that on current international greenhouse emission commitments, the world is heading for 3.4ºC rise from pre-industrial revolution levels by 2100. For Australia, this translates into a hard-to-conceptualise 4.4ºC rise.

Only if the unmanageable is avoided is there a chance to stabilise the system.

The evidence from tipping points alone suggests we are in a state of planetary emergency: both the risk and urgency of the situation are acute.… If damaging tipping cascades can occur and a global tipping point cannot be ruled out, then this is an existential threat to civilization.

The Earth is entering the sixth mass extinction event in its history. In this context, and with the movement still very disparate, radical climate activists need to be clear about what strategy will help and what is simply a detour.

Independent MP for Warringah Zali Steggall’s bill for climate action by 2050 fits into the latter category. As climate campaigner David Spratt tweeted on November 8: “For Australia, zero #climate emissions by 2050 has NO basis in the science and is in complete disregard of ANY notion of climate justice.”

Steggall’s bill is attracting broad support because of the major parties’ inaction: it is being marketed as “the plan” to set targets between 2030 and 2050 and, because there are no targets, it fills the vacuum.

The Australian Council of Trade Unions (ACTU) has just joined the list of corporate, medical and other supporters of Stegall’s bill. Spokesperson Michele O’Neil said on November 9 that it “offers the [Scott] Morrison government a chance to join with the rest of the world in addressing the existential threat posed by climate change”.

Climate scientists argue that net zero emissions by 2050 is too late to avoid catastrophic climate change, and especially for the countries of the South.

Steggall’s bill is largely about the creation of a new Climate Change Commission (CCC), which would set shorter-term targets and report on Australia’s emissions and preparedness for climate change. But its five-member commission would have no power to force government to act. It can only advise. The government can ignore it.

O’Neil said “the reality of climate change” means “we must act now to avoid it” and that “workers affected by the changes necessary to meet the 2050 targets” need “a just transition”. The peak union body has dragged its feet on climate change.

O’Neil is rightly critical of the federal government’s inaction. But the ACTU should also criticise the Labor opposition which, so far, has also avoided setting new 2030 targets. The resignation from the shadow cabinet of the fossil fuel promoting resources spokesperson Joel Fitzgibbon may change that. But while Labor supports new coal and gas projects, its climate plan will fall well short of what is necessary.

But Steggall’s bill, which remains silent on new coal and gas, is not the route. Indeed, it assumes that coal and gas exports will continue. Steggall’s bill proposes that the new CCC “must report to the Minister on the effect of Australia’s fossil fuel export emissions”.

Too little, too late

Her push for net zero emissions by 2050 is too little too late, and setting up a longer timetable, essentially aimed at helping corporations adapt, ends up protecting the profits of the fossil fuel producers. Her adaptation push only weakens the movement.

“Adaption is no substitute for deep climate mitigation and restoration because it is not possible for most people and nature to adapt to 3–5°C of warming this century”, CRC said.

This is why Steggall’s bill is totally inadequate. As Green Left said of her bill in February:

It appeals to those who do not have confidence that the emerging climate movement can build up enough power to win its demands, including for no new coal and gas.

If the ACTU was serious about its members’ jobs and climate action, it would be at least championing the Australian Greens’ proposals to quit coal and transition away from gas, while retraining affected workers.

CRC says “zero emissions, even in a decade, coupled with large scale drawdown, is not sufficient to negate the existential risk”.

This means unions and the climate movement need to be bold and step up the pressure on all parties for serious climate action.