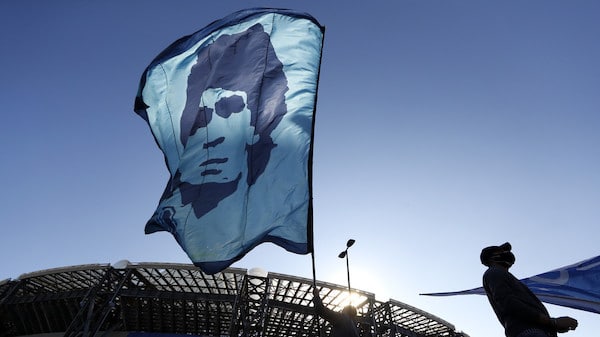 Diego Maradona was an icon and a true people’s hero–just like his own icons, the revolutionaries Fidel and Che.

A working-class hero is something to be…

“L’audace, encore l’audace, toujours l’audace.” The slogan of the French revolutionary hero Danton might have been stencilled on the flesh of Diego Maradona alongside his own heroes Fidel Castro (with whom his death anniversary is now eternally entwined) and his compatriot Che Guevara.

I saw him play for Argentina in 1979 in Glasgow when he was just 18, although he had won his first international cap at 16. It was in Glasgow he scored his first international goal but it was a simple one. It was the goal he laid on for a team-mate that day which etched his audacity into my mind, leaving a Scotland team of greats like Kenny Dalgliesh and Alan Hansen with twisted blood as they “birled” this way and that seeking, impossibly, to get to grips with the teenage sensation. They might as well have tried catching moonbeams.

Diego Maradona was born into a family of 10 in impossibly impoverished circumstances in the slum of Villa Fiorito where the only running water came through the roof or ran through the shanty-town in the open sewers.

And as the Guardian obituary–the best I have read so far – put it, he forever-after “carried the whiff of the street urchin about him even as the millions rolled in.”

It was perhaps this which so endeared him to the masses of Naples where his virtual beatification is already underway. For the Italian elite, Africa begins in Naples and there was always a whiff of Africa about Diego Maradona. The condescension of the Italian elite turned into a burning hatred as Maradona carried Napoli to titles and trophies never-before attained. He was always the underdog and beloved by underdogs everywhere.

Fidel Castro, whom I knew well, adored Maradona, once taking off his military jacket and draping it around Maradona’s shoulder. It was one of the most touching of their encounters. The adoration was mutual. Maradona was to his core a revolutionary man.

When he won the World Cup virtually single-handed (five goals, five assists) for Argentina in 1986–just four years after the Falklands War–the feat required him to slay England on the way. In the game, he scored first with a magnificent header and then with a mazy run beginning well inside his own half, leaving five England players for dead. His leap of joy was unconstrained (as is the Argentine commentary) and had everything to do with the Argentines fallen in the Malvinas.

We knew they had mowed our young men down like little birds.

A list of Maradona’s causes would take too long but would stretch from Northern Ireland to the Middle East and of course through all righteous struggles in Latin America. His friendships with Fidel, with Hugo Chavez in Venezuela and Daniel Ortega in Nicaragua were based not merely upon the mutual attraction of superstars but on Maradona’s perfectly educated hatred of “Yankee imperialism.” The whiff of the street urchin was not dispelled by his millions. Maradona was a people’s champion.

When I broke the news of his demise to my own six-year-old football prodigy son known by all the parents watching him as the “little Maradona” for his bounce-back ability and dribbling skills, he asked me: “Did he die of the coronavirus?”

After a minute’s silence, he asked:

Who attacked his heart, Daddy?

It should be consoled by the wave of sadness rolling in from around the world for the street urchin from the slums of Villa Fiorita. Don’t cry too much, Argentina. The truth is he never left us. He will shine on forever. Eternalmente.