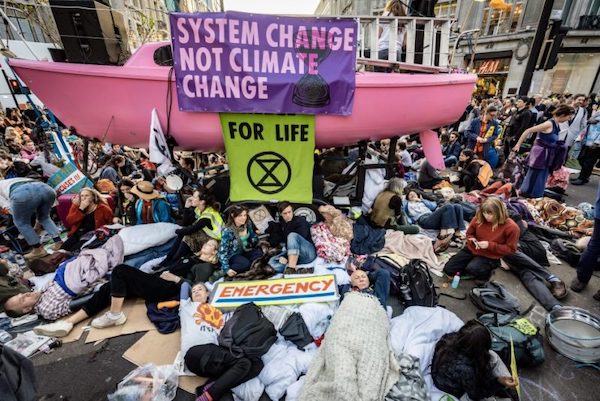 The UN Emissions Gap Report released on Dec. 9, shows how far off the mark we are for averting complete climate catastrophe. Current global emissions reduction policies have us on track for 3.5 C warming by 2100, which would be catastrophic for life on Earth. An average increase of 1.5 C globally is the line that must not be crossed–with current temperatures at an average of nearly 1 C warming.

The report takes a surprisingly class perspective by pointing out that the one percent richest people on the planet are responsible for emissions equal to that of the poorest 50 percent of the world’s population. This group would need to reduce its carbon footprint 30 fold just to meet the Paris Agreement commitments.

2020 will likely be the hottest year on record following the record breaking hot decade of the 2010s. With unprecedented monsoon rains, wildfires, hurricanes and tropical cyclones, we are witnessing the unraveling of life on Earth as we know it. And let’s not forget the pandemic, which is the result of the changing climate and human encroachment on wildlands, with official reports of nearly 70 million globally contracting the virus and more than a million dead.

Arctic ice loss has accelerated so much that scientists are predicting that a new Arctic climate is emerging–moving from one of snow and ice to one of open water and rain. Similarly, scientists are alarmed by the rapid deterioration of the Antarctica ice sheet. Ice loss triggers a positive feedback loop as open water and land absorb more heat, unlike ice and snow that reflect the sun’s rays–meaning ice loss creates more warming, which accelerates more ice loss, and so on.

A 2015 consumption-based greenhouse gas emissions study of the San Francisco Bay Area–home of Big Tech and the highest concentration of billionaires on the planet–confirms the UN assertion and shows that the areas where the super rich live have by far the highest share of emissions. The study looked at the life-cycle GHG emissions of all products used and consumed within the Bay Area–from production, shipping, use and disposal of those products. This is key in order to assign the appropriate responsibility for emissions, and in turn the crisis that humanity is facing. Instead of pointing the finger at the poorer countries where U.S. corporations have outsourced production to, or poor communities within wealthier nations, tying the emissions back to the source of the highest consumption rates shows a more accurate picture of who truly holds more responsibility for the problem.

Individual behavior change not the solution

The corporate media frames solutions as one of individual behavior change, which really takes the blame off the producers and puts it onto individual lifestyle choices–in essence a mass marketing campaign for “green” products and electric vehicles. This gives the illusion that if we all just fly less, recycle more, and go vegan, the crisis will be averted. While having more environmentally-conscious practices is good, the majority of the population that is just struggling to survive often doesn’t have access to “green” options. This scapegoating of the individual diverts attention away from the true culprit, the capitalist system itself–just 100 companies responsible for 71 percent of emissions since 1988.

What you personally do, doesn’t solve the unsustainability of the production model of capitalism. For instance, the UN report goes on to point out that the dip we have seen in global emissions during the pandemic will not have a positive effect in the long run. The solution goes way beyond driving less for a few months. We need an uprooting of the capitalist production model that is based on the whims of the market rather than sustainable planning.

The very nature of capitalism that allows billionaires to exist by hoarding the wealth created by the exploited working class, is the source of the problem. A system that requires endless growth and ever increasing profits can never be sustainable.

The “one percent” are the ruling class of the world–the ones who truly call the shots–controlling corporations and to a large degree, government policy. These capitalists are always looking for ways to profit off of any situation. Whether an investment is good for humanity and the environment is irrelevant. Making the highest profits possible is the only concern. For instance, Wall Street recently began trading water futures making a basic need for human survival into a cynical betting game. This is a perfect example of “disaster capitalism” and reveals the complete disregard for the survival of our species and a complete disinterest in truly addressing the climate crisis.

We cannot solve this crisis within the trajectory of global imperialism

There are a few relatively simple actions that could be taken that if implemented on a comprehensive scale could lower global temperatures, increase the water table in drought-plagued areas, and increase biodiversity and ecosystem resilience to the changes underway. Restoring forests, wetlands, and grasslands, along with a shift to regenerative agriculture and an end to fossil fuel use, could stem the unraveling of our climate in just decades. Humanity has the tools to save ourselves, but the “one percent” and the system of capitalism that their police, military, courts and prisons protect, is literally driving us off the cliff.

One glaring omission that the UN climate reports and summits never address is the issue of imperialism. How can we lower global emissions when the imperialists–who are the biggest per capita polluters–consistently block any binding commitments at the climate summits, despite pressure from the Global South? How can we globally work together for our survival when the U.S. and their European allies constantly undermine and reduce to rubble any nation that doesn’t bow to their demands?

For instance, Libya, prior to its destruction in 2011 by the U.S. and NATO, had the highest standard of living on the African continent. Libya had nearly completed the “Great Man-Made River,” the world’s largest irrigation system that was greening the desert, and were creating a Pan-African banking system and currency to bring the continent out of indebtedness to the imperialist-controlled IMF and World Bank. That could have meant true independence for African nations and development based on sustainability. But, the imperialists wreaked total destruction upon Libya, cheered on the lynching of its leader, and bombed the irrigation system, creating a failed state that today has open slave markets trading Black Africans.

We cannot solve the global climate crisis within the current trajectory of world imperialism. We must uproot the system of capitalism and move to a socialist system built on cooperation and sharing of resources. The wealth of the “one percent” must be seized to fund an ecological and social revolution and put the power into the hands of the majority to determine what is needed for the benefit of both people and planet.

We need to organize ourselves across borders, get educated on the issues, and build a mass militant people’s movement to realize this goal. The time to act is now, to seize control of the car–of the production system–before the capitalists drive us off the cliff. We have the power to stem the climate crisis and take an evolutionary leap forward to a socialist society that meets all of our needs for an equitable and abundant future.