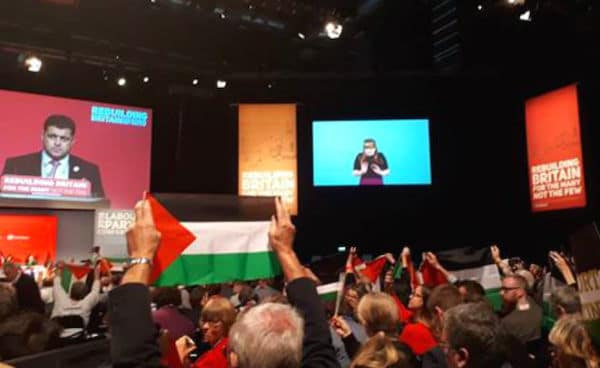 The Labour Party has declared all-out war on its members who support Palestine. Amid the outrageous ban on discussing Jeremy Corbyn’s record on antisemitism, those who have spoken out about Israel’s brutal occupation are being silenced.

Naomi Wimborne-Idrissi is a courageous and fearless campaigner for Palestine. She has talked about the abuse she has had from within the Jewish community for her views (watch this video if you haven’t already!). She and another leading member of Redbridge CLP have been suspended, amid leaks to hostile media.

Moshé Machover, an Israeli-born veteran socialist and anti-Zionist has again been suspended over allegations including the use of the term ‘weaponising antisemitism’.

Similarly, Louise Regan, the Vice-Chair of the Palestine Solidarity Campaign and the chair of her CLP in Nottingham East, was suspended for allowing a motion to be tabled calling for the whip to be reinstated to Corbyn.

And last week, both CLPs in Tower Hamlets had motions on The Big Ride for Palestine ruled out of order. This follows the local Labour Council’s refusal to allow the charity bike ride to have a rally in a Tower Hamlets park in 2019. That decision was revealed by PSC to have been motivated by fears that the use of the word ‘Palestine’ could be deemed to be antisemitic, given the council’s recent decision to adopt, without any caveat, the flawed and discredited IHRA re-definition of antisemitism.

Hours before branch meetings were due to be held in December, members were informed the motion in support of the Big Ride, had been ruled “out of order” and could not be discussed. This fell under the same prohibition of motions regarding party democracy, and reinstatement of the whip to Jeremy Corbyn.

Our warnings and worst fears have proven justified. The debate inside the Labour Party and the adoption of the IHRA “working definition” on antisemitism now appear to be the premise for prohibiting discussion and motions on Palestine solidarity campaigns.

This is not just about Palestine–it is a serious clampdown on the left in the Labour Party. Recently a CLP was prevented form donating its own funds to foodbanks and other charities. All motions in support of Jeremy Corbyn have been banned in an attempt to silence the Labour left from operating within party structures.

Labour is also supporting Tory education minister Williamson’s attempt to bully Universities into adopting the IHRA definition, by threatening to withhold funding. This move would ban most types of Palestine solidarity action from campuses.

This is all despite existing Labour policy in support of Palestine, and the powerful, and unanimous Unite motion to the TUC this year which refers to Israel having an apartheid system.

The ramifications of all this are significant–the space in which Palestinian voices can be heard is shrinking, as the Israelis clampdown further, under cover of the U.S. and Covid, on Palestinian human and political rights.