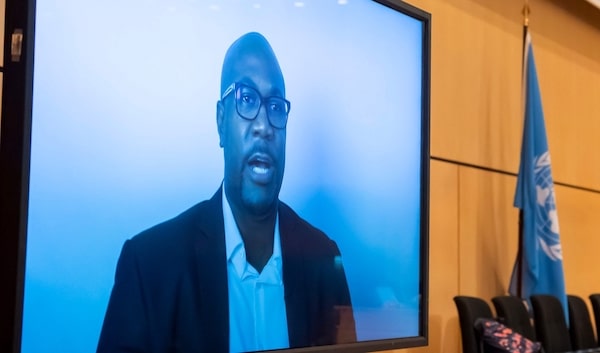 It’s been more than six months since George Floyd’s killing by police on May 25 sparked worldwide protests, and led the United Nations Human Rights Council to consider creating a commission to investigate police violence in the U.S. That didn’t happen, but the international network of lawyers and activists who feel such an inquiry is needed didn’t give up.

Work started almost immediately on an alternative investigative commission that would hold hearings, write a report, and deliver it to the UN Human Rights Council. The drive to create the inquiry was started by retired Rutgers University professor Lennox Hinds. It plans to hold hearings from Jan. 18 to Feb. 6. Hinds meticulously recruited prominent international figures as the commissioners.

We anticipate there would be pushback.

“We anticipate there would be pushback,” Hinds told The World.

And one of the first things that they will do is disparage the credibility of the commissioners, and so, therefore, we sought individuals who have an international reputation, and their report cannot be dismissed out-hand (sic) by the United States.

None of the 12 commissioners are from the US. They include prominent lawyers, advocates, professors, judges and UN special rapporteurs from South Africa, Nigeria, Japan, India, France, Costa Rica, the UK and Jamaica. One, Hina Jilani, founded Pakistan’s Human Rights Commission and sits on the council of The Elders, a global group of human rights advocates created by Nelson Mandela. Another is professor Sir Hilary Beckles, vice-chancellor of the University of West Indies, who’s now at the University of Glasgow, and helped negotiate that school’s decision to pay millions in reparations for its role in the slave trade.

The commission’s hearings are being organized by leaders from the International Association of Democratic Lawyers, the National Conference of Black Lawyers, and the National Lawyers Guild, including international human rights lawyer Kerry McLean.

We don’t want this to be adversarial…. We want the [UN] high commissioner [Michelle Bachelet] to actually use this report. She’s not doing hearings, so we’re doing hearings.

“We don’t want this to be adversarial,” McLean said.

We want the [UN] high commissioner [Michelle Bachelet] to actually use this report. She’s not doing hearings, so we’re doing hearings.

“South Africa took that approach, reached out for international solidarity when they were trying to dismantle apartheid,” she said.

And this is the approach that we decided we have to take–since the powers that be in the U.S. are still putting up such a strong fight.

After George Floyd’s death, the UN Human Rights Council convened a rare, urgent debate to consider a resolution brought by a group of African countries and more than 600 humanitarian groups, It would set up an unprecedented independent inquiry into “systemic racism” and “police brutality” in the United States.

“You in the United Nations are your brothers’ and sisters’ keeper in America,” George Floyd’s brother, Philonise Floyd, said by video.

I’m asking you to help us—Black people in America.

The United States wasn’t officially part of the council debate. That’s because, in 2018, the U.S. became the first country to quit its seat, alleging the council biased against Israel.

But behind the scenes, the Trump administration lobbied aggressively against an international independent investigation focused just on the U.S., said Jamil Dakwar, human rights program director for the American Civil Liberties Union, one of the groups that backed the resolution.

“The outcome is a result of the pressure, the bullying that the United States did, assisted by many of its allies,” he said.

“If this council has a role to play in defeating racism, it should refrain from singling out one specific country,” said Israeli representative, Aviva Raz Shechter, during the debate,

let alone a strong democracy where transparency, the rule of law and accountability mechanisms are in place.

Ultimately, the resolution was rewritten to make the investigation more general and passed on June 19. It tasks Bachelet with delivering a final report in June 2021 on police violence across the world.

I think the challenges are great because this is not a full-fledged independent, independent commission of inquiry…. It was pretty unprecedented to have such a meeting convened. While it was disappointing, it was not entirely surprising.

“I think the challenges are great because this is not a full-fledged independent, independent commission of inquiry,” Dakwar said.

It was pretty unprecedented to have such a meeting convened. While it was disappointing, it was not entirely surprising.

That’s because African Americans have asked the UN for help before.

In 1951, singer and activist Paul Robeson submitted a petition to the UN signed by nearly 100 prominent Americans, charging the U.S. with genocide of African Americans.

In 1978, another petition charging human rights violations by the U.S. was filed by an international attorney named Lennox Hinds — the same Lennox Hinds who, 42 years later, would suggest an alternative investigation after the UN Human rights council decided against an inquiry into U.S. police violence.

All the commissioners’ work will happen over Zoom, because of the COVID-19 pandemic. They’ll consider cases from the past 10 years, along with historical data, for the report they’ll deliver to the Human Rights Council.