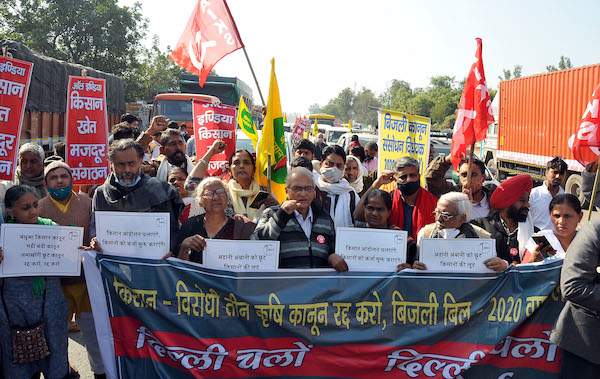 THE historic nationwide farmers struggle that began on November 26 entered the fourth week on December 17. It was intensified and broadened even further after the unprecedented support that was expressed by the people of India through the Bharat Bandh on December 8.

For the first time since the neo-liberal policies began three decades ago, all sections of the peasantry have united as never before against the three Farm Acts, against the rapacious corporate lobby, both Indian and foreign, and against the BJP-RSS central government that is acting as their servile agent. This protracted struggle has united the poor, middle and even large sections of the rich peasantry. The working class, which has itself been hit by the four Labour Codes imposed by the centre has rallied to the support of the peasantry in its struggle. Large sections of the middle classes are also backing the valiant fight of their ‘annadatas’. Women, youth and students from all these classes are standing in solidarity with the struggle.

The last week saw another series of massive peasant actions one after the other, as per the call of the SamyuktaKisanMorcha (SKM) given on December 9, just after the Bharat Bandh and after the SKM had unanimously rejected the written proposals of the central government. Those developments were outlined in these columns last week.

First, there is a massive increase in the number of farmers gathering on the borders of the nation’s capital. Thousands of farmers from Punjab, Haryana, Uttar Pradesh, Uttarakhand and Madhya Pradesh are freshly joining the mahapadavs at the Singhu, Tikri, Ghazipur and Palwal borders where four national highways coming to Delhi have been blocked.

Second, the last national highway from Jaipur to Delhi, which was still open, was blocked by thousands of farmers under the leadership of the AIKSCC on December 13. A large share of those who blocked this highway was AIKS-led farmers from Rajasthan and Haryana and CITU-led Anganwadi workers from Punjab. Red flags are flying here in abundance. They have now been joined by AIKS and CITU-led activists from Gujarat. Some other farmers’ organisations have also contributed to the blockade.

Third, the AIKS Maharashtra state council which held its online meeting on December 14, has decided to mobilise peasants in large numbers from all over the state and join the mahapadav at the Rajasthan-Haryana border. They will begin their 1,300 km vehicle march with a huge rally at Nashik on December 21. Hectic preparations are on to make this march a great success.

Fourth, thousands of farmers in various parts of the country picketed hundreds of toll plazas and refused to pay the toll on December 12. This action elicited an enthusiastic mass response.

Fifth, lakhs of farmers gathered around Delhi observed one day fast on December 14. This fast came after the farmers faced and fought severe repression in the form of water cannons, tear gas shells, lathi charges and arrests at the hands of the BJP governments in Haryana and at the centre, and after braving the biting December cold for the last three weeks.

Sixth, the nationwide call for demonstrations at all district and tehsil centres on December 14 got a massive response from lakhs of farmers in almost all states across the country. After the continuous mass actions on November 26, December 3, December 5 and the December 8 Bharat Bandh, this fifth countrywide action in three weeks blew to smithereens the government’s motivated claim that this struggle is confined to only two or three states. On December 16, a massive West Bengal peasant rally has been organised by the AIKSCC in Kolkata and it was addressed by AIKS general secretary Hannan Mollah and many others.

On December 14, apart from the huge mass actions everywhere, MLAs and MLCs of the CPI(M), PWP, BVA, NCP and SP waved a large red banner in the premises of the Maharashtra Vidhan Bhawan on the opening day of the state assembly’s winter session in Mumbai, demanding the immediate repeal of the three Farm Acts and supporting the countrywide farmers struggle. CPI(M) MLA- Vinod Nikole, addressed the media that was present there in strength.

Seventh, the countrywide call to boycott Ambani and Adani products and services has struck a chord and is being well responded to in several states. Farmers and other sections of the people have led large demonstrations outside Reliance and Adani outlets in many states. Social media channels are being used in a big way to popularise this campaign.

CALL FOR HOMAGE MEETINGS ON DECEMBER 20

It is tragic that over 30 farmers have died while taking part in the struggle on the borders of Delhi. And yet the callous and cynical BJP central government refuses to respond to the one-point demand of farmers for the repeal of the three Farm Acts and the withdrawal of the Electricity Amendment Bill.

The SKM which met on December 15 has given a nationwide call to hold public meetings between 11 am and 1 pm on December 20 to pay homage to all these martyrs of the farmers struggle. There is no doubt that this call will get a massive response across the country.

In a very significant move, as reported by ‘The Hindu’ on December 13, Army veterans from Punjab and Haryana who are camping at the Singhu border have collected over 5,000 gallantry medals since November 26 to return to the central government. They plan to collect 25,000 such medals in the next few days. Some extracts from the above report are eye-openers.

Eighty year-old retired Havaldar Balwant Singh from Jhajjar in Haryana said, “I come from a family of jawans and kisans, which have eight martyrs, either in war or at the border. I was proud of that fact, but because of what the government is doing now, it has begun feeling like this country is no longer worth living in, leave alone to die for. We have been here since the November 26th and the government, instead of listening to us, is busy finding ways to force upon us, these black laws created by people in air-conditioned rooms.”

Retired Subedar S P Singh from Gurdaspur in Punjab said some six farmers were detained when they had attempted to meet President Ram Nath Kovind to return a small batch of medals last week. Retired HavaldarBartar Singh from Patiala alleged that the group of veterans was detained for two whole days and their phones and belongings were confiscated. He said, “I was a soldier earlier but even before that, I was a labourer and a farmer. We are willing to sacrifice these medals in return for a repeal of the black laws…They kept us in detention for two whole days thinking that we will go back home, but the first thing we did after being released this morning was to come back here to join the protest.”

Retired Naik Kapil Dev from Haryana said, “These medals were given not for entertainment but for valour, for coming face to face with death, through sweat and blood and tears, but the jawan is ready to let them go for a better future for the farmer.”

Living in its own world far away from such voices from the ground, and cosying up to the corporates who help it win elections through money and media power, the callousness of the BJP-RSS central government continue unabated. Its leaders have tried, with no success whatsoever, to defame, discredit and divide the farmers movement for the last three weeks.

First, they accused the farmers of being influenced by Khalistanis. Then they alleged that they were instigated by Pakistan and China. After that, they accused them of being led by Maoists and Naxalites. In spite of the Godi media hurling such Goebbelsian charges ad nauseam, they have been rejected with contempt by the people of India, whose support has kept growing.

Realising that its defamatory campaign was becoming counter-productive in the face of massively mounting protests, the government tried a new tack. Propping up some of its own agents (‘dalals’ is a much better and more accurate word) as so-called farmers’ organisations, it held negotiations with them. Like a command performance, they duly supported all the three Farm Acts. The RSS-led BharatiyaKisan Sangh (BKS) and the Swadeshi Jagran Manch (SJM) were also brought in to make noises opposing the farmers struggle. None of this is working one bit.

In a feeble attempt to draw attention away from the farmers’ struggle, on December 10, prime minister Narendra Modi with much fanfare laid the foundation stone for the new parliament building. He used all his usual empty phrases of our “democratic legacy”, “reflecting India’s aspirations” and “being always accountable to people and the Constitution”.

It was the classic RSS-BJP fascistic habit of speaking one thing, while doing the exact opposite. Modi spoke of “atmanirbharta” on the one hand, while selling off the country to Indian and foreign corporates, on the other. Today he is speaking of “democracy”, “aspirations” and “accountability to people” on the one hand, while letting millions of Indians shiver in the bitter cold for weeks on end on the borders of the nation’s capital, on the other.

But the peasants, the workers and the people of India will teach these modern Neros a lesson in this most peaceful and democratic and united resistance that is unfolding before our eyes.