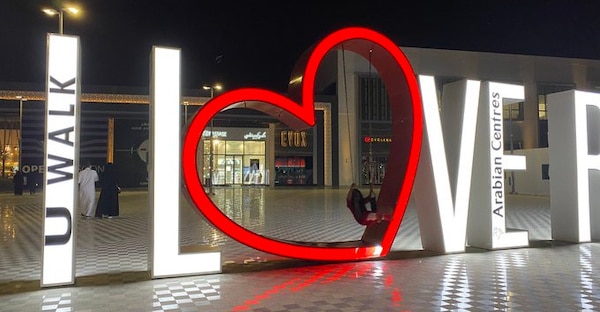 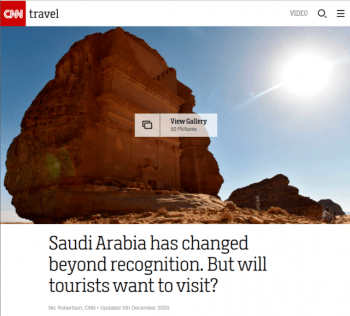 CNN (12/5/20) describes mass arrests ordered by Mohammed bin Salman as a way “to shake up the kingdom in a way his predecessors dared not.”

“Freedom is blossoming.” That is how, without a shred of irony, CNN International Diplomatic Editor Nic Robertson describes Saudi Arabia in his recent article (CNN, 12/5/20). Visiting the kingdom, he informs us, it has “changed beyond recognition” since his last stay. All around him, there was “a sense of lightness, a freedom to make choices.” And this is all thanks to one man: Crown Prince Mohammed bin Salman. “Now our lives as Saudis completely changed,” says one interviewee.

Actually from all the decisions taken by Mohammed bin Salman. All Saudis now is happy about all these changes.

This might be news to many readers who know the country as among the most repressive and censorious in the world, one where millions of immigrants are kept in slave-like conditions, and as the leader of a military coalition turning Yemen into the world’s worst humanitarian disaster. According to the UN, over 24 million of Yemen’s 29 million people need humanitarian assistance. The Saudis target health and water infrastructure, carrying out one air raid on them every ten days on average for the last five years. But perhaps, if Robertson is correct, all this is in the past?

The article also presents bin Salman’s decision to round up and jail hundreds of his political rivals as arguably a good thing, an anti-corruption drive that “shak[ing] up the kingdom.” Yes, yes, the Crown Prince ordered the killing of Washington Post journalist Jamal Khashoggi, Robertson notes, but, he claims, “The young seem OK with it.” He goes on to note: “When I first came to the kingdom in 2003, Riyadh had only two towers. Now there are dozens”—as if that mitigates the murder and dismemberment of a journalist. The article was promoted on Twitter with an image of a giant sculpture of the word “LOVE” with the O replaced by a heart.

Robertson’s relentlessly, embarrassingly optimistic article comes on the heels of another CNNTravel piece by Francesca Street (12/1/20) lauding the country’s “epic efforts” and the “stunning and ambitious project” it is pursuing. “Saudi Arabia is in the process of repositioning itself as a tourist destination to watch,” Street writes, and away from what she euphemistically calls its “concerning human rights history.” Yet the piece does not stop to mention the obvious fact that this article is part of this “repositioning.” 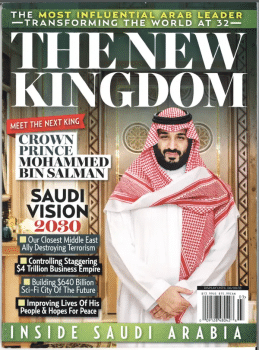 This glossy celebration of Saudi Arabia and its ruler was not paid for by the country, publisher American Media claims.

CNN is far from the only offender, however. New York Times columnist Thomas Friedman (a frequent target of FAIR’s criticism—e.g., FAIR.org, 2/21/09, 4/13/11, 6/29/17, 9/6/18, 7/13/20) was in raptures when he met bin Salman in 2017 (New York Times, 11/23/17), declaring Saudi Arabia to be going through its own Arab Spring, thanks to the country’s crown prince. “Not a single Saudi I spoke to here over three days expressed anything other than effusive support” for the jailing of hundreds of bin Salman’s opponents, he tells readers. (For those wondering who the rich American columnist visiting a Saudi monarch spoke to, his article mentions an American-educated Saudi woman, a banker, an entrepreneur, an NGO worker and the Minister of Education—perhaps not an all-encompassing cross section of Saudi society.)

In fact, Saudi Arabia has been on a major propaganda offensive of late. In 2018, American Media Inc., owners of outlets such as Us Weekly, OK!, Men’s Journal and (until recently) the National Enquirer, put out a nearly 100-page magazine extolling the virtues of bin Salman and his vision for the country, printing 200,000 copies for distribution nationwide. Despite being a love-fest from cover to cover, the company insisted it received no Saudi help or money. The Saudi sovereign wealth fund did, however, invest $200 million in Penske Media, owner of many influential magazines like Variety and Rolling Stone, and has been making overtures to Hollywood and the entertainment industry as well.

Abroad, the Saudi state owns large portions of two of Great Britain’s largest newspapers, the Evening Standard and the Independent. It has also set up a Persian-language news organization, the Independent Persian, which shares the masthead and branding of the British outlet, but is in fact a propaganda operation aimed at Saudi regional rival Iran. (Saudis speak Arabic, while most Iranians speak Persian.) “It was pretty clear that the Independent’s editorial control would be nominal,” said one senior journalist who was approached to lead the operation, but refused because it was clear who would be calling the shots.

Riyadh has tried to control the narrative online as well, employing an army of Twitter bots pushing pro-Saudi talking points.

Bin Salman and his government received very bad publicity for the murder of Khashoggi, although other, even bloodier offenses, such as the Yemen onslaught, have been largely ignored by the corporate press (FAIR.org, 3/20/18, 7/23/18, 4/9/19). Since then, the crown prince has been on a media charm offensive, trying to present one of the most repressive states in the world as a progressive, emerging country. Media should not be helping him do that, either for cash or for free.