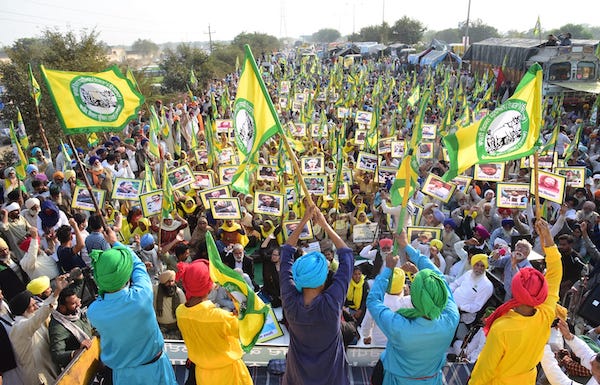 The kisans gathered around the Delhi border have unerringly put their fingers on the real issue confronting them, namely their very survival as peasants. Till now there was an arrangement in the country which, though crumbling under the impact of neo-liberalism, still kept the peasantry alive. The three laws brought in by the Modi government are meant to remove this life-line altogether. These three laws thus carry the neo-liberal agenda in this sphere to its limit. This is also why there can be no meeting ground between the protesting kisans and the government, within the ambit of these laws; they simply have to be repealed.

These laws for the first time since independence would allow encroachment into agriculture by unbridled capitalism, of which, naturally, the big players, i.e. corporates like Ambani and Adani and multinational agribusiness firms, will be the main beneficiaries. To see this point, a distinction needs to be drawn first.

There was much talk in the seventies about the development of capitalism in Indian agriculture; and one may wonder why so much fuss should be made of encroachment by capitalism now if a tendency towards capitalist development had already manifested itself nearly half a century ago. If the peasantry has not disappeared despite the appearance of capitalism so long ago, then why should one worry about its disappearance now?

That capitalist development however had been internal to the agricultural economy; it consisted of an admixture of peasant and landlord capitalism that was developing within a regime that actively discouraged the encroachment of capitalism into agriculture from outside. This regime included the MSP, procurement operations, public distribution at subsidized prices, and so on. The government in short interposed itself within that regime between the peasant producers on the one hand and the outside capitalist sector and the world capitalist market on the other. The development of capitalism in agriculture occurred then within a universe where there was such an interposition by the government, where agriculture was insulated from the outside capitalist sector.

An important feature of commodity production, namely that it leads to a swallowing by big producers of small ones, which in the present context means a swallowing of peasants by the corporates, manifests itself fully only when commodity production in this true sense binds both the peasant and the capitalist economies. Within the regime of MSP and procurement there were restrictions on the spontaneity of the operation of the market; in fact the MSP itself was a restriction of this kind which prevented such swallowing.

The introduction of a neo-liberal regime was aimed at re-establishing such a spontaneity of the operation of the market. This demanded the dismantling of the arrangement that had prevented the swallowing of peasant agriculture by corporate capital; but while several parts of the earlier regime were dismantled, making peasant agriculture increasingly unviable and giving rise to a spate of peasant suicides,  a central feature of it, namely the system of MSP, procurement operations and public distribution system, remained intact. The MSP was kept for long below what it should have been, but was not given up. No government had till now been so brazen in its insensitivity towards the peasantry that it could dismantle the whole system. The Modi government however has beaten all previous governments in its insensitivity; it has decided to dismantle the regime that stood as a bulwark against the corporate takeover of peasant agriculture where the peasantry would be reduces to the status of labourers or de facto tenants-at-will.

In fact, exposing agriculture to the full blast of commodity production, with the State not interfering in the functioning of the agricultural markets, will bring about at least three fundamental changes. First, it would open up the country’s land resource to the dictates of the world market, which means in effect the dictates of imperialism, since the superior purchasing power of the advanced countries would then determine the pattern of land use. Second, since in the present context the demand of the advanced countries is for tropical crops other than foodgrains, full-fledged commodity production would mean a diversion of land away from foodgrain production, i.e. a substitution of other crops and other ways of using land for foodgrain production, which would mean India’s becoming food-import-dependent in the event of domestic food demand exceeding domestic production. Third, as already mentioned, it would mean leaving the peasantry to the mercy of the corporates, and a loss in the economic status of the peasantry. There are many ways in which this would happen. By way of illustration, we can think of one possible way as follows: peasants producing cash crops at the behest of the corporates to meet world demand, would get indebted to the latter in a poor crop year or in the event of a crash in the price (whose effect is invariably passed on to the peasants irrespective of what the original contract price was); once they are trapped in debt they would lose their lands and become labourers.

All this should be familiar from the experience of the colonial days when the peasantry was thrown to the mercy of the market with no government intervention in the form of MSP and procurement prices. The distress to which it was reduced has found heart-rending expression in virtually every vernacular literature of the country during the thirties and the forties; and yet so many intellectuals appear unaware of the implications of leaving peasant agriculture to the untrammelled operations of the market. It is as if they do not know the history of their own country. The BJP’s being innocent of any knowledge of history is understandable; but several non-BJP intellectuals being starry-eyed about commodity production without government intervention is surprising.

These implications of full commodity production will necessarily mean an increase in the pauperization of the peasantry; and since any worsening of the peasants’ material condition brings about a synchronous movement in that of the entire working people, there will necessarily be an increase in absolute impoverishment of the working people as a whole. To see this let us assume deliberately that employment per acre remains unchanged because of the shift from food to cash crops. (If it does not remain unchanged but declines instead, then the increase in impoverishment is obvious). Let us even assume that the per capita income of the peasantry and of agricultural labourers remains unchanged by the shift from food to cash crops. Even so however, if there is a single year of price-fall for the cash crop, the incomes of the working people, i.e. peasants and labourers, would drop, necessitating borrowing on their part.

And once they have got into debt there would be no stopping their downward slide towards destitution because of a very simple fact associated with commodity production, namely that while the effects of price-falls are fully passed on to the peasant producers by the corporates mediating between the peasants and the market, the effects of price increases are not. So the chances of debt incurred, when world market prices fall, being paid back when world market prices increase, are non-existent. The debt therefore would remain like a millstone around the peasantry’s neck, resulting in its pauperization; and since many peasants would migrate to cities in search of jobs, swelling the reserve army there, such pauperization will impoverish the working people as a whole including even the organized workers.

The issues involved in the peasant protests therefore go far beyond this or that clause of the three bills. They concern the very survival of the peasantry.