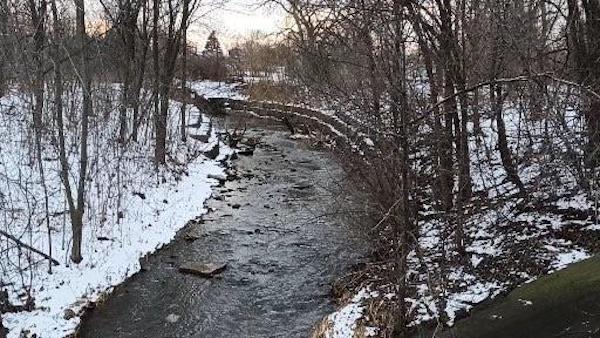 A river in the territory of the Mississauga people, in Ontario, Canada. Photo by Avexnim Cojti.

On December 8, 2020, several media sources reported that fresh water started to be traded on Wall Street as a commodity such as gold and wheat. This comes as water scarcity is increasing in California and many parts of the world and as we near a global water crisis. A water crisis is worrisome enough, yet more alarming is the fact that our Mother Water will be controlled by a privileged group of people who will determine its value to the world.

As Indigenous Peoples of Abya Yala (the Americas), we have seen how our territories were turned into private property for the benefit of settlers and their governments. Although we might have lost our livelihoods in certain cases, we are resilient and we continue asserting our rights to collective lands and land protection. This time, we cannot stand by as Mother Water becomes one more commodity on the capitalist market. It is not right. New Zealand, Ecuador, and Bolivia in recent years have passed groundbreaking legislation giving personhood status to bodies of water as well as securing additional protection for nature. In India, there have been legal attempts to consider the Ganges and Yamuna Rivers as legal persons in an effort to combat pollution. In 2016, the Colombia Constitutional Court found that the Atrato River basin possesses rights to “protection, conservation, maintenance, and restoration.”

We refer to water as our Mother Water in the same way we refer to Mother Earth. They are both mothers who nurture us and all living beings at no cost. We honor water in our ceremonies and practices as it is a sacred element of our livelihoods. In the community of the Maya of Chuwila in Guatemala, people greet the water spirit and we thank it for being with us at the first touch of water in the morning every day. Offerings of flowers are done to water when it is the first time it comes to households. Mother Water needs to be protected and cared for not only by Indigenous people but by all people. We are called to protect all life in regions where water is most scarce.

With climate change, overpopulation, dysfunctional consumerism, unsustainable agriculture, and multiple types of land extractivisms around the world, the scarcity of freshwater is escalating, as is the number of deaths due to illnesses caused by contaminated water sources and lack of access to water. Conflicts within and between communities are arising because of water scarcity and unequal access. One example is the depletion of lake Chad in Nigeria due to climate change that has led to conflict, violence, and the displacement and forced migration of local people. The global community cannot avert our eyes to these facts.

Water on the Wall Street market will benefit only those with large capital who can afford to pay the price of water. It will push people and families to pay for it or die. This will be seen especially in regions where water is already in crisis like those communities around lake Chad. Pedro Arrojo-Agudo, Special Rapporteur on human rights to safe drinking water and sanitation rightly said, “In this context, the risk is that the large agricultural and industrial players and large-scale utilities are the ones who can buy, marginalizing and impacting the vulnerable sector of the economy such as small-scale farmers.” By affecting the price and availability of water, we are also affecting the food security of the world and the displacement of millions of people in the short future.

Water as a commodity on the market can also lead to its privatization and price gouging that would benefit only the most economically strong. As a consequence, people desperate to survive will fight for water rights. One outstanding example in our recent history was the water war in Bolivia in 2000. A private consortium, dominated by the Bechtel Corporation of San Francisco, took over Cochabamba’s water system and raised water rates after the government of Bolivia sold this public service to them. After massive protests, injuries, and deaths, the people of Cochabamba recovered water as a public good and Bechtel Corporation sued the government of Bolivia for damages.

Other examples in the struggle for water rights and water defense are the cases of the Maya Q’eqchi’ Peoples in Guatemala and Sunuwar communities in Nepal. The Maya Q’eqchi’ have fought for the protection and collective use of the Cahabón and Oxec Rivers in the northwest part of the country. They opposed private hydroelectric Oxec projects that were established without the Free, Prior and Informed Consent of Indigenous communities. As a result of the conflict, Bernardo Caal Xol has been a prisoner of conscience since 2018. Xol is one of many land and water defenders who has spoken out on behalf of Indigenous communities and opposed the projects. He was criminalized by Energy Resources Capital Corporation who acted with the support of the Guatemalan government. On the other side of the globe, in Nepal, Sunuwar communities are actively fighting hydro dams which are being built without their consent on the Likhu and Khimti Rivers. These struggles demonstrate the will of the people to fight for water rights and to protect sacred waters from development and pollution that are not unique are present in most countries.

Water is essential for life, access to fresh water is a human right, and most importantly, water is sacred. Water is life.