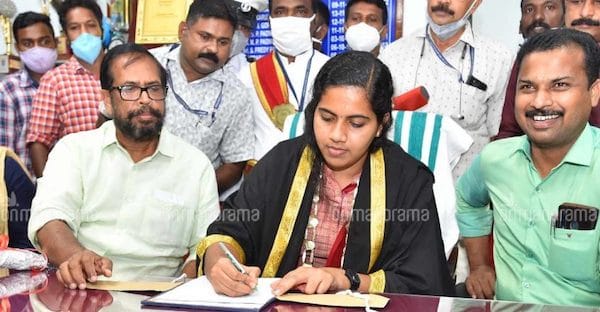 Ms Rajendran, a BSc Maths second year student at the All Saints college, has been elected as the new Mayor of Thiruvanathapuram Corporation, making her the youngest Mayor in the state.

Ms Rajendran had won from the Mudavanmughal ward of the city corporation, bagging 2,872 votes, 549 more than the rival Congress candidate. Thiruvananthapuram Mayor K Sreekumar (CPI-M), had suffered a shock defeat in the polls.

LDF won majority of 53 of the 100 seats in Thiruvananthapuram Corporation, followed by NDA. Congress led UDF was again pushed to a third here.

Incidently, this was also the first time Ms Rajendran could exercise her vote in the local body elections due to her age.

“Even though I was not entitled to vote in the last local body elections, but I still was actively campaigning for the party candidate. That experience and exposure helped me this time as well. I have been activelyinvolved with the party during election campaignin the past,” Ms Rajendran told NDTV.

Daughter of CPI(M) activists K Rajendran and Sreelatha, Ms Rajendran has been associated with the party from a very young age. “From the time I remember my childhood, I was going to Balasangham. May be from around the age of 5. I am now the State President for Balasangham. I am also the Students Federation of India state committee member. My parents are branch committee members of CPI(M). And we firmly believe in what the party stands for”, Arya Rajendran said. Balasangham is the children’s wing of CPI(M) and Students Federation of India and is the party’s students wing.

Her father is an electrician and mother a LIC agent. She also has a brother. All members in the family are strong CPI(M) supporters.

“My family fully supported me and are extremely happy. I will not stop my studies. I will continue it. I also want to pursue my higher studies in Public Administration”, Arya said when asked about her graduation studies.

On being asked about becoming a Mayor at such a young age, Ms Rajendran said,

Democracy is not about one person leading alone, it’s about  deciding collectively and getting decisions implemented. The party has ushered in a new era with this decision and by fielding so many young candidates, including young women candidates.

“Growing with the party, we have been repeatedly exposed to challenges and crisis management. One of the leading examples is our own Chief Minister Pinarayi Vijayan and the way he communicated with people and leaders during various disasters”, she added.

As a Mayor, her top priority would be waste management in the capital city, which has been a challenging task for her predecessors also.

“Our city is beautiful. To keep it like this, it should be free of waste. Besides a scientific waste management system, a thorough awareness is needed among people not to dump waste on the waysides,” Ms Rajendran told news agency PTI.