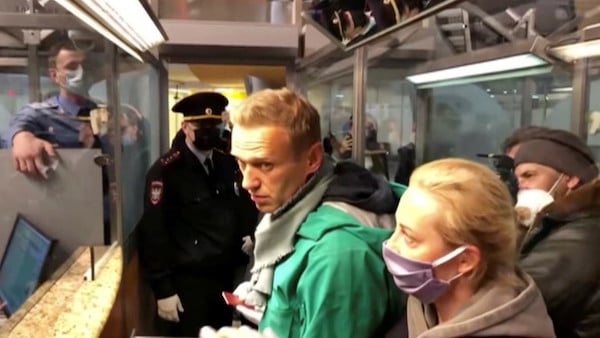 A regime change project in Russia was launched on Sunday with the return of political activist Alexei Navalny to Moscow. It was a highly symbolic event–except that Navalny was travelling by an aeroplane from Germany and not in a sealed train.

Navalny’s rebranding from an obscure rabble rouser to an international celebrity through the past 5-month period is apparently complete. And the timing of his arrival in Moscow is perfect. Moscow had forewarned that he’d be detained for interrogation, being on the wanted list. And this while the Biden Administration is hitting the ground on coming Wednesday, raring to go.

The presidential elections are scheduled to be held in Russia in March 2024 and the next couple of years will be crucial for the Kremlin politics. The big question is whether President Vladimir Putin would seek another six-year term or not.

Putin keeps everyone guessing. Another term as president is his for the asking, as his popularity continues to soar, built on a solid record of achievements in consolidating Russia’s comprehensive national power, steering the country’s resurgence on the world stage and enhancing its international prestige and ensuring the global strategic balance.

Putin is the anchor sheet of the Russian boat. Unsurprisingly, he makes a formidable adversary for the U.S. The Russian analysts expect Biden to turn the U.S.-Russia-China triangle to Washington’s advantage by engaging China and isolating Russia. Basically, in Biden’s world view, China is a competitor but is pragmatic and open to deal-making, and will remain neutral in the U.S.’ confrontation with Russia.

Generally speaking, Biden and the Obama-era officials who comprise his national security team are rooted in their belief that the Russian power calculus is inherently fragile. From such a perspective, Navalny’s return to Russia becomes a moment of truth. The coming weeks would show the extent of popular support he actually enjoys.

The outgoing U.S. Secretary of State Mike Pompeo has lost no time to issue a strongly worded statement on Sunday regarding Navalny, demanding his “immediate and unconditional release” while also taunting Putin indirectly as an insecure leader. How far Pompeo contrived to create a precipitate situation for the incoming Biden administration we do not know. Such a possibility cannot be ruled out.

At any rate, in diplomatic terms, Navalny’s detention in Moscow is being turned into a cause célèbre of the transatlantic alliance at a juncture when Europe has been harping on its strategic autonomy from the U.S. and Germany has pushed back at U.S. pressure to scuttle the Nord Stream 2 gas pipeline project. A German-Russian rapprochement will not be to the linking of Washington and London and some European capitals. The EU Foreign Affairs Council meeting on January 25 is expected to discuss the case of Navalny.

Possibly, the stage is being set for a US.-Russia collision right at the outset of the Biden presidency. In anticipation of the gathering storms, perhaps, the Kremlin made an extraordinary move on Saturday with the former president Dmitry Medvedev authoring an op-ed in the state news agency Tass on Russia’s relations with the U.S. In a lengthy analysis, Medvedev laid bare the archaic political system in America with election rules drawn from the 18th century body polity that virtually negate the essence of truly democratic mandates for the elected presidents, which ultimately renders the U.S. an “unpredictable partner” for its allies and partners alike.

We expect it is highly likely that the United States will consistently pursue an anti-Russian policy… Biden has not yet said anything positive about Russia. On the contrary, his rhetoric has always been openly unfriendly, harsh, even aggressive… Our relations are likely to remain extremely cold in the coming years. And right now we do not expect anything but the continuation of a tough anti-Russian policy.

But, interestingly, Medvedev concluded by making an impassioned plea for moderation in the U.S. policies and conveying Russia’s readiness to work with Biden. No doubt, the essay has been written to draw Biden’s attention.

The U.S. Central Intelligence Agency has traditionally spearheaded the cutting edge of the American policy toward Russia. And for the first time, a former diplomat William Burns who is also an experienced “Russia hand”, will be heading the agency in the Biden Administration. Burns’ memoirs The Back Channel is openly critical of Putin, where he candidly writes that

Basically, we’re facing a Russia that’s too big a player on too many important issues to ignore… It’s a Russia whose assertiveness in its neighborhood and interest in playing a distinctive Great Power role beyond it will sometimes cause significant problems.

Burns examines the Russian motivations in domestic and international politics and surveys the U.S. decision on NATO’s expansion towards Russia’s western borders in the mid-1990s, the dismemberment of Yugoslavia in the late 1990s, the U.S.’ invasion of Iraq in 2003 and the U.S. deployment of missile defense in Europe soon afterward as defining moments in the relationship. To be fair, he takes a rational view and takes note of the genesis of Russia’s progressive alienation from the West. Nonetheless, the bottom line is that he advocates a hard line toward Russia.

Managing relations with Russia will be a long game, conducted within a relatively narrow band of possibilities. Navigating such a great-power rivalry requires tactful diplomacy—maneuvering in the gray area between peace and war; demonstrating a grasp of the limits of the possible; building leverage; exploring common ground where we can find it; and pushing back firmly and persistently where we can’t… We ought to traverse it without illusions, mindful of Russia’s interests and sensibilities, unapologetic about our values and confident in our own enduring strengths. We should not give in to Putin—or give up on the Russia beyond him.

Succinctly put, Burns sees the troubled relationship with Russia as something to be managed rather than fostered or nurtured and he is deeply pessimistic about the prospects of any improvement so long as Putin continues to be in power. Conceivably, Biden shares such a perspective too, and one main consideration amongst others in his decision to put Burns as the head of the CIA would be that the U.S. diplomacy in the period ahead will be navigating a turbulent phase in the relationship, where the American interests lie in promoting a change of regime in the Kremlin, which will of course essentially devolve upon the measure of success of the spy agency’s covert operations to destabilise Russia.

Top Kremlin officials had alleged in September that Moscow had definite information that CIA operatives were working with Navalny in Germany. If so, Navalny is a strategic asset that the CIA will not give up easily. But all indications are that Moscow is also digging in for the long haul. Foreign Minister Sergey Lavrov has rebuked the Russia’s Western partners and urged them “to show politeness, exclude methods of diplomatic boorishness and honour their international obligations in the situation” involving  Navalny.

That being the case, to be sure, the CIA is all set to make a hyper-aggressive opening move on the Russian chessboard–the Danish Gambit! In the game of chess, the Danish opening usually lasts less than 20 moves as white will either breakthrough and checkmate the king early on or white will fail miserably and be left in shambles. This is not for the faint of heart.