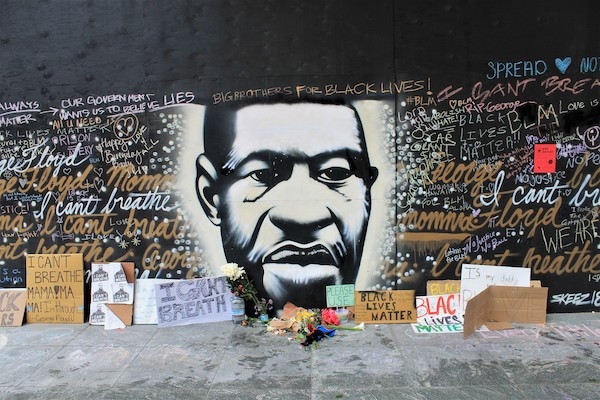 George Floyd, who was publicly tortured and lynched by Minneapolis police officers on May 25, 2020, narrated his own death, legendary civil rights lawyer Benjamin Crump told the International Commission of Inquiry on Systemic Racist Police Violence Against People of African Descent in the United States at its January 25 hearing.

He narrated his death, like a cinema movie at the time.

The unarmed Floyd was accused of using a counterfeit $20 bill. As Floyd lay face down on the ground with his arms handcuffed behind him, Officer Derek Chauvin kept his knee firmly planted on Floyd’s neck for 8 minutes and 46 seconds, squeezing the life out of him. Floyd pleaded, “I can’t breathe” 28 times. “I can’t feel my insides,” he uttered. “I can’t feel my legs.” He called out for his mama, who had predeceased him by two years. Floyd said, “Tell my children I love them.” Two other officers kneeled on Floyd’s back and legs as a fourth officer stood guard to keep horrified citizens from intervening to save Floyd’s life, threatening them with mace.

Philonise Floyd, George’s brother, implored the commissioners at the hearing, “I’m asking you to let his legacy continue to build a brighter future from structural racism and police brutality . . . I’m asking and seeking justice for all Black and brown men, women and children who have needlessly been killed by racism and police violence.” He added,

Not only did my brother have the weight of three police officers on him, he had the weight of a nation plagued with centuries of systemic racism that stole his last breath.

Only mass action will thwart impunity for racist police killings.

The murder of George Floyd is “the most important civil rights case of this century,” said Crump, who represents the Floyd family. Indeed, the videotape of Floyd being tortured to death ignited a mass uprising against white supremacy throughout the United States and around the world. The officers who murdered Floyd weren’t fired or arrested until the video galvanized massive protests. Only mass action will thwart impunity for racist police killings.

Attorney Jasmine Rand testified that officers in the Minneapolis Police Department receive “Killology training.” They are instructed to kill rather than de-escalate conflict situations. Rand said that between 2015 and 2020, Minneapolis police used violence against Blacks seven times as often as against whites.

Floyd’s case kicked off the second week of commission hearings, which feature testimony in nearly 50 cases of police killings of unarmed and non-threatening Black individuals.

The murder of Floyd was committed in broad daylight in the presence of several eyewitnesses, much like the shooting of Jacob Blake in Kenosha, Wisconsin, on August 23, 2020. Crump’s firm also represents Blake, whose case was presented to commissioners on January 25 as well. Blake was left paralyzed after police shot him seven times in the back while his three little boys watched. On January 5, the Kenosha County District Attorney announced that the officer who shot Blake will face no criminal charges.

Another illustration of the impunity police officers enjoy is the case of 12-year-old Tamir Rice, who was playing with a toy gun in a park in Cleveland, Ohio on November 22, 2014, when officers shot and killed him. Billy J. Mills, attorney for the Rice family, testified on January 26 that a whistleblower revealed that career prosecutors in the Department of Justice wanted to seek an indictment against the officers. But Donald Trump’s political appointees quashed the investigation.

In several of the cases heard by commissioners, police tried to cover up their crimes by concocting false narratives. They demonized the victims, aided and abetted by police union lawyers and corrupt medical examiners who falsely reported the cause of death to protect the officers. Case after case confirms the system of structural and institutional racism that leads to police killings of unarmed Black people.

Two Systems of Justice–one for whites, one for Blacks

Testimony elicited at the hearings exposes two systems of justice–one for whites and one for Blacks. “Oftentimes, when police pull our white brothers and sisters over, they see them as a measure of assistance. When they encounter African Americans, we see it as a measure of oppression,” Crump testified.

Contrast the police treatment of Black individuals like Floyd, Blake and Rice, who were doing nothing illegal, with the police response to Kyle Rittenhouse. Forty-eight hours after police shot Blake in Kenosha, Rittenhouse, a young white man, shot three people who were protesting Blake’s shooting. He killed two of them and wounded another. He then strolled down the street armed with his assault weapon as police and national guardsmen looked on. “No one shot him in the back. No one killed him and no one arrested him,” Crump said.

None of those police officers saw him as a threat.

Contrast the starkly different police responses to the largely peaceful Black Lives Matter protesters–who were met with overwhelming police violence and mass arrests–with the mainly white January 6 insurrectionists–who were allowed to storm the Capitol and nearly kill our elected representatives.

The commission was established by the National Conference of Black Lawyers, the International Association of Democratic Lawyers, and the National Lawyers Guild after the Trump administration prevented the UN Human Rights Council from convening a UN commission to investigate systemic racism and police brutality in the United States.

But the Council did order the High Commissioner for Human Rights, Michelle Bachelet, to write a report about police violence against people of African descent, not limited to the U.S., by June 2021. After the hearings, the Commission will prepare a report and submit it to the high commissioner to help inform her task. The commission will also publicize its report widely in the U.S. and globally for use in litigation and advocacy. Twelve eminent international lawyers are serving as commissioners. I am one of four rapporteurs assisting them with the hearings and preparation of the report.